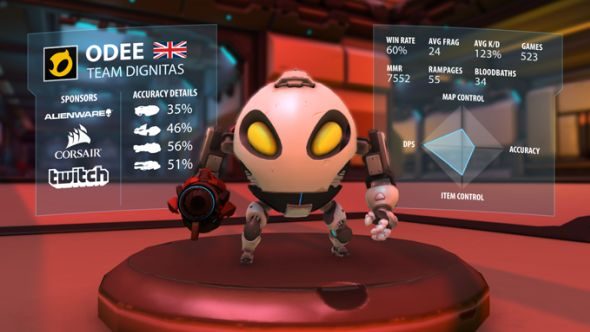 A game funded almost entirely by memes – could it be done? James Harding, better known as the internet’s 2GD, has turned his eSports events/coverage company The GD Studio into a game development house, making a spiritual successor to Quake/Unreal Tournament. It’s called Diabotical, it’s up on Kickstarter now and it’s already well on the way to its goal, buoyed by a host of pledge levels for playing games with Harding’s more famous eSports friends.

Inspiration from some of the greatest FPS games there ever were – can it join them?

The Kickstarter video gives a short trailer, which is almost unbearable from a voiceover perspective but the game looks alright, and a history lesson on Harding, the studio and their plans.

I did warn you about the voice over, but it certainly looks like Quake-with-balls. The main point of divergence will be two-fold, making the legendarily difficult movement easier to get into but as hard to master while adding powerups rather than weapons.

It’s already made £53k of a £110k goal after just a couple of days, and looks set to make it easily. A huge group of £300 tiers let GD Studio’s eSports-focused fanbase buy time with the various now-famous personalities that have been involved in the past, with many already sold. It is, quite literally, selling on personality.

As far as stretch goals, they’ve got a couple involving co-op planned out, but they don’t seem keen on expanding the scope of the project beyond hyper-competitive arena shooter with lots of maps, modes and competitive integration. Unless they hit a million dollars, in which case, well, go read for yourself.

They’ll bring it to Steam, despite Harding’s well-documented spat with Gabe Newell, in the next 12 months.