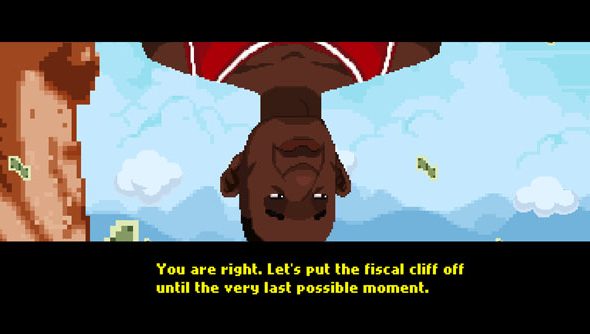 Well, this evening’s already been irreparably coloured by the ridiculous advertising campaign commissioned by Square Enix… or has it?

Old Spice come to the rescue with Dikembe Mutombo’s 4 1/2 Weeks to Save the World. The tale of pro-basketball player Dikembe Mutombo and his quest to delay Earth’s demise on the 21 December, as predicted by the Mayan’s.

Read on, if you think you can handle the awesome.

20 minutes ago I hadn’t heard ofDikembe Mutombo nor his his4 1/2 Weeks to Save the World mission, now I feel as if I’ve let the site down. Thankfully Eurogamer brought it to my attention.Each week a new level of thisridiculously funny pixel-art platformer is released topoke fun at another example of cultural detritus.

For instance this week’s episode is called ‘The Lethal Dose of Teenage Vampire Movies’. It has you fighting laser shooting-teenagers inside a ball tumbler as you try to destroy the number balls that Hollywood Fat Cat needs to come up in that week’s lottery to win the jackpot and fund his next teenage vampire movie, natch. I’ve still only played a couple of the episodes but they’re full of great lines, art, and simple (but fun) platforming. You are depriving yourself by not playing.

Now to go and buy more Old Spice than I can reasonably afford.