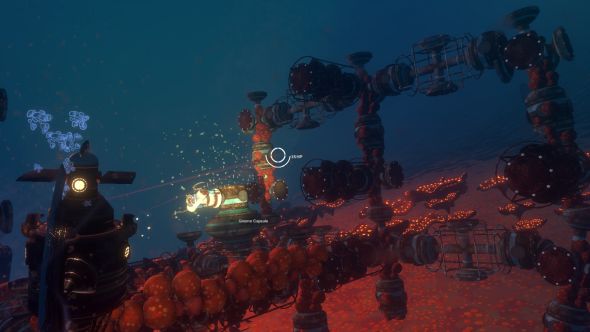 If I knew the coming of the flood would be so pretty, I’d start building an arc. This is Diluvion, a newly announced game from indie studio Arachnid Games, due to be published before the end of the year. They describe it as a mix of Freelancer and the works of Jules Verne, with a splash (geddit) of RPG/FTL crew management. I call it really mad ships kicking the hell out of each other.

Another piping hot serving for the upcoming PC games table.

Set after the end of the world, humanity now exists mostly in submarines. There’s ice across the surface to stop anyone getting out and, as you can probably see, giant monsters down here with them. I’m a particularly large fan of spider-crab ship-guy towards the end there.

Anyway you, as a new ship captain, are off in one of nine ships with your customisable, talkative crew to find humanity’s greatest secret. Take your bets now, I’m on ‘we caused the flood.’

A bunch more over on the official Steam page. “Fall 2016” is the current listed release date, with no price mentioned. Could be full, could be in that medium £19.99 / $24.99 range. It’s also going to be at Gamescom, so expect a little more on the game there, including hopefully some gameplay impressions.