What do you get if you spend nigh-on £4,000 on a gaming PC? Well, if you get a machine from DinoPC you get a scaly-looking rig with innards that look like a bomb from Die Hard With A Vengeance, and 4K gaming performance which is simply stunning. Mostly…

Building your own super-rig? Check out simple guide to basic overclocking.

You need to dig into DinoPC’s Ultra High-Endsection if you want to find the Raptor2 in its natural environment because that’s exactly what this beast of a gaming PC wants to be: ultra high-end. This is most definitely a rig which wraps serious gaming performance in a slickly-designed and built package, but how close is it to the ultimate gaming machine?

If you’re an impatient sort and want to dive directly into the gaming performance of DinoPC’s monster rig check out the links below.

For any gaming rig the two key specs are the processor and graphics card. Or, in the case of the Raptor2, graphics cards. For a top-end SLI machine the GPU choice is pretty clear cut right now, so this DinoPC rig rocking a pair of Nvidia’s GTX 1080 cards comes as no surprise. That pairing delivers quite incredible levels of gaming performance…in compatible titles. We’ll come back to that li’l caveat later on.

The graphics array alone accounts for around a third of the cost of this £3,799 PC, which is actually a pretty good ratio when you’re building yourself a high-end gaming rig. Of course if you wanted to lose all semblance of sanity you could always build yourself a Pascal-based Titan X machine, but then we really are straying into pro-footballer levels of spending power.

On the CPU side though DinoPC have played it relatively safe and opted for the ubiquitous Intel Core i7-6700K. They have at least overclocked it a decent amount, pushing our review sample up to 4.7GHz out of the box. Considering our test rig’s 6700K chip will only get up to 4.8GHz at its very limits that’s an impressive guaranteed clockspeed.

But then it should be because of the stunning multi-radiator water-cooling system DinoPC have built inside the Raptor2. The illuminated loop uses EK water blocks to chill the twin GTX 1080s and the i7 CPU, and pushes the coolant through first a 360mm radiator and then a secondary 240mm radiator. The fat cooling pipes are well placed, giving a clean, simple finish to the interior.

That interior is lit up by white LED strips as well as the blazing red LEDs from the Gigabyte Z170X-Ultra Gaming motherboard everything plugs into. And it’s all visible to the wandering eye thanks to the tempered glass side panels which had my nerves shredded as I struggled to lift the monstrous rig out of its packaging.

The DinoPC Raptor2 is also sporting 16GB of high-performance DDR4 memory from Corsair and a 256GB M.2 SSD from Samsung to round out the key specs package. 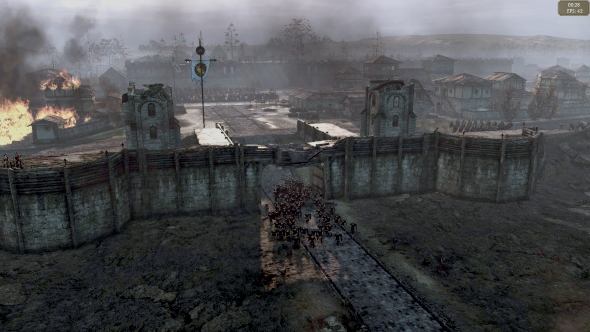 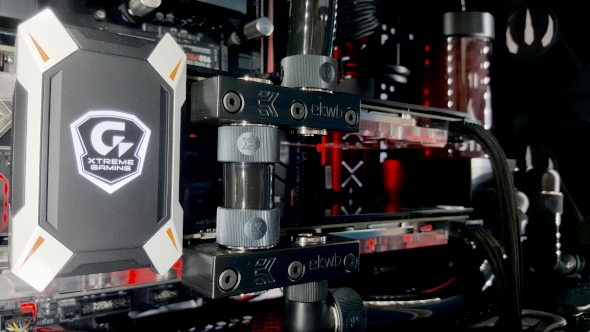 The last gaming rig we checked out was the MSI Aegis X, a small form factor machine that’s a little more than half the price of this DinoPC yet still manages to pack a whole lot of gaming power inside it. It’s only sporting a single GTX 1080, but in a way that is maybe the best route to take. As you can see from the gaming benchmarks above there are still problems around using multiple graphics cards.

When they work together the gaming performance is nothing short of stunning. At 4K the DinoPC Raptor2 is knocking around the 100fps mark for both GTA V and Shadow of Mordor. And being able to top the 10,000 point in 3DMark’s new Time Spy DX12 test is mighty pleasing too. All told it’s not quite delivering twice the performance of the lone GTX 1080 in the Aegis X, but it’s really not far off. And when you’re almost hitting 200fps at 1440p you know there’s a whole lot of GPU power going on in there.

But with both Nvidia’s SLI, and AMD’s competing CrossFire technology, there will always be times when a game simply won’t play ball with the complicated matter of splitting its rendering efforts across multiple graphics processors. Normally that’s only for a short period after a game’s release, but not always.

I didn’t choose the DX12 Hitman and Tomb Raider benchmarks, nor the DX11 Total War: Attila test, to highlight the problems with SLI, they’re merely a part of my standard game testing suite. They’re all established titles and for one of those super-expensive graphics cards to be sat twiddling its transistors because they’re not capable of using both is incredibly frustrating. And that’s just me as a reviewer, if I’d actually spent nearly four thousand pounds on this machine I’d be supremely gutted whenever I hit upon an SLI issue.

When you look at the gaming frame rates in the SLI-compatible titles it would be tempting to say it’s worth the odd time when it doesn’t work, but it still makes it tough to recommend spending so much on a multi-GPU array for a gaming rig.

In CPU terms the i7 6700K in the DinoPC uses its overclocked performance to push it ahead of the Aegis X, which is running the same CPU but, because of its cramped chassis, is only able to run at 4.2GHz as standard. A side-effect of the second GPU not always working though means we can see what performance that extra CPU performance boost can net you in processor-intensive titles like Total War. Overclocking can sometimes make a big difference to your gaming performance.

Where the MSI machine has a serious edge though is in the storage performance. The Samsung SSD 950 is one of the best consumer-focused M.2 SSDs around right now, but in its 256GB guise does seem a fair amount slower than its 512GB brother. It’s also slower than the twin 128GB M.2 Toshiba SSDs MSI have used in their Aegis X machine. 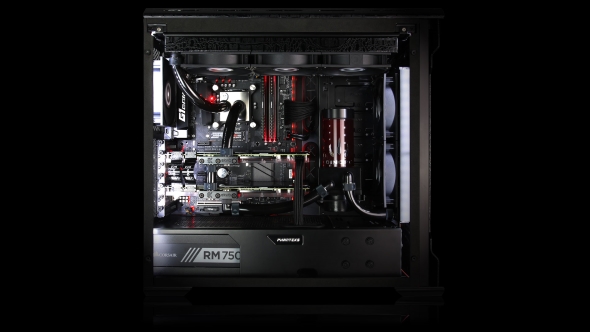 When I’m testing a machine which costs this much I want to feel like I’m using something special and despite the impressive build quality of the cooling array, and the components attached to it, the Raptor2 just doesn’t quite live up to its ultra high-end billing.

The twin GTX 1080 graphics cards are great when they work, but it’s so frustrating that in 2016 I’m still complaining about how much of a lottery SLI gaming can be. I understand that’s not DinoPC’s fault, and that an ultra high-end gaming rig needs a second GPU to properly nail 4K gaming, but it does take the edge off.

As does the fact you’re spending a huge amount of money on the build and cooling design. The actual components in the Raptor2 only really account for around 60% of the total cost, the rest seems to have gone into the build, the shipping, overclocking, the admittedly impressive five year warranty and the scaly decal DinoPC have covered the Phanteks chassis with.

At this sort of price I’d want to have better than a standard quad-core CPU, I’d also want more than a 256GB SSD too. That’s barely going to be enough for even the most modest of Steam libraries.

As much as I think the Raptor2 – scaly decals aside – looks absolutely stunning, I feel like you’re not getting the best value for your money. I understand the upper echelons are where rig builders make their margins, but even in the rarified air of the ultra high-end gaming PC world you want to know you’re getting a good deal – if you’re getting the right components at the right price even a four grand machine can be stellar value. And there are similarly-priced rigs available with six-core Intel chips, X99 boards, double the RAM and still come water-cooled up to their eyeballs.

The Raptor2 really is a good machine, well made and with impressive performance, I just don’t think it’s quite four grand good. When the SLI’d GTX 1080s are flying it’s tough to argue with its supreme gaming speed, but when they’re not – though no fault of DinoPC – you might question your pricey purchase.