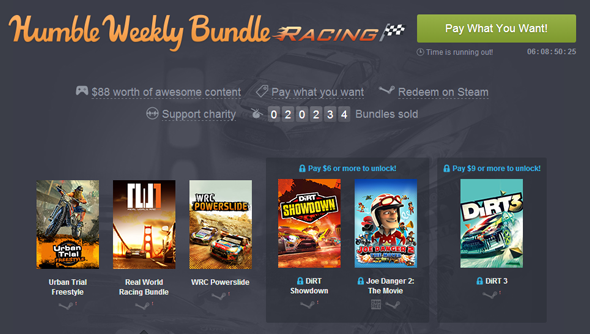 If racing’s your thing, Humble’s latest bundle will have you reaching for your driving gloves. It covers everything from street to rally to motorbikes to Joe Danger.

The pay what you want tier inclides WRC Powerslide, Urban Trial Freestyle, and Real World Racing Bundle (which packages the top down racing game with a zombie mode).

If you pay $6 or more you can nab a copy of Dirt Showdown, the destruction derby version of the rally racer, and Joe Danger 2: The Movie. If you want to get an inkling of No Man’s Sky, the procedurally generated space explorer, then you’ll want to play Joe Danger 2. I mean, they’re nothing alike to play but they’re made by the same studio.

$9 gets you a copy of Dirt 3. If you’ve not played any of the Dirt series then Dirt 3’s defintely a good entry point, adding new cars, modes, and maps. However, I don’t think it matches Dirt 2 for sheer barrels of fun. Plus, Dirt 3 adds a lot more gymkhana to the mix. Gymkhana’s what rally drivers do make clear how non-Rally drivers couldn’t do what they do:

I never could do them.

You can pick up the bundle from Humble’s site. It’s only there for a week so you’ll have to hop to it.

Check our guide to the best PC racing games.