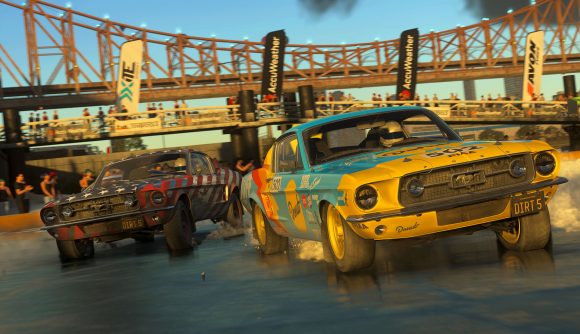 Dirt 5 looked flashy and muddy when it screamed across the screen during its reveal in May, showing off next-gen looks and a kicking soundtrack. Now developer Codemasters has provided some fresh details on how the off-road racer’s career mode will work, and it’s just as over-the-top: Dirt 5’s career mode will take you through more than 130 possible events in nine race types, and feature some top-name acting chops.

Troy Baker and Nolan North headline the voice talent in career mode, playing off-road rivals Alex Janiček and Bruno Durand. Your career mode journey starts out with a clash between these two titans of the scene, and it’s out of the wreckage of that fateful contest that your climb to the top begins.

According to Codemasters’ new blog post, Dirt 5’s career mode is split into five chapters that each feature a selection of race types and locations. You’ve always got your choice of how to proceed through a chapter, earning stamps to gain entry into a main event that caps off each section of the story. Placing higher in races earns more stamps, and completing side objectives will unlock special head-to-head ‘throwdowns,’ pitting you against a single tough AI challenger.

Your story will be analyzed by James Pumphrey and Nolan Sykes from the massive automotive YouTube channel Donut Media. Pumphrey and Sykes host the in-game DiRT Podcast, which features guest appearances by North’s and Baker’s rival racer characters.

As in any racing game worth its salt, you’ll also be able to sign contracts with famous brands like Michelin, Monster Energy, and even Codemasters themselves. And you’ll be able to have your friends jump in, too – every event in career mode supports drop-in split-screen multiplayer, so you won’t have to pause your progression to share the action with your pals.

Dirt 5 hits PC on Steam in October. While you wait, practise your power slides with one of the best racing games for PC in 2020.