When eager racers fire up Dirt 5 on November 6, they’ll be greeted by a familiar voice: the racing game’s Alex ‘AJ’ Janicek, who serves as your guide and mentor through career mode, is voiced by none other than Troy Baker. You’ll recognise his voice as Revolver Ocelot in Metal Gear Solid V, as Higgs in Death Stranding, and Pagan Minn in Far Cry 4.

Baker is joined by fellow voiceover royalty Nolan North, who has played characters like Desmond Miles in the Assassin’s Creed series and Nathan Drake in the Uncharted Series. He plays racer Bruno Durand in Dirt 5 – a bristly racing veteran who has no time for niceties.

Dirt 5 presents its story through an in-game podcast with real-life automotive podcasters James Pumphrey and Nolan Sykes, two gearheads who have a hard time taking anything very seriously. That meant improvising much of what brings the characters to life in the game, and North tells us that step one was reading the Bible. Not the regular Bible, mind you, but a huge dossier filled with background information on the characters.

“I got this Bible of who [Bruno] was, his accomplishments, how he was raised, what he believes in,” North tells us. “It was really interesting to create this character that, as long as I did my homework, I could go into an ad-libbing improv situation and listen and respond to questions as he would, and that is what makes this so different from anything I think I’ve ever done.”

Baker says that there’s a point during these podcast-style recordings when AJ’s wife is mentioned, and the way he had absorbed all of the background information on his character meant that he was able to react and move the conversation along in a way that sounds natural and authentic.

“Because I understood how family plays into AJ, and what that means to him, I didn’t need direction for that specific moment, or that specific conversation,” Baker says. 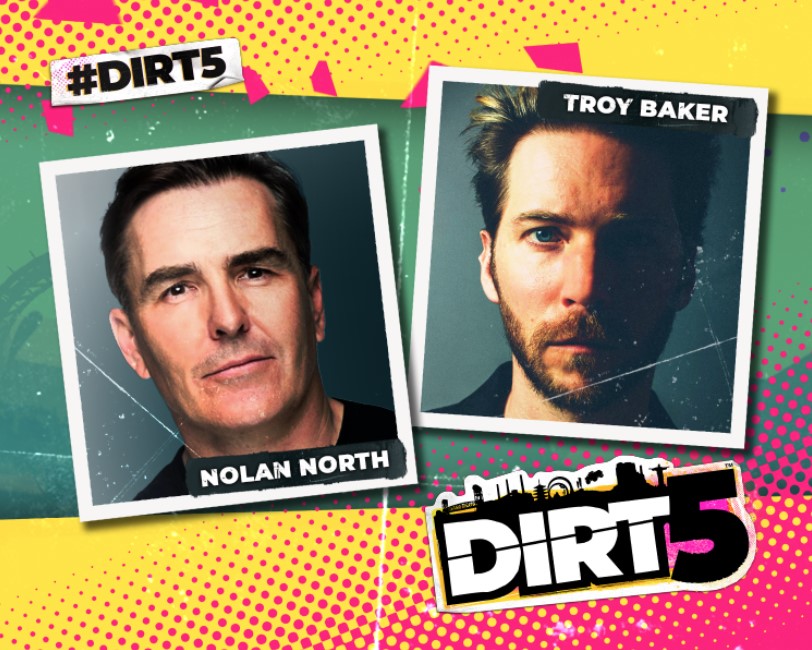 A major point of departure Dirt 5 takes from the rest of the series is how it broadens its focus to include more of the racing scene – instead of a driver alone on a rally course, you’re competing against many drivers, and you’re being watched by people. Dirt 5’s world is much more populated than ever before, and Bruno and AJ are there to bring more life to the experience.

Dirt 5’s narrative arc sets you on a course that at some point intersects with North’s Bruno, who initially comes across as a direct rival – he’s the guy to beat. But North hopes players will gradually grow to respect and understand him as their Dirt 5 careers progress.

“Dirt 5 has come and been able to give you that extra level, going, ‘Yeah, it’s you against the track – but this guy Bruno’s on the track,'” North says. “You might start out not liking Bruno, especially because you really like AJ, and then over the course of it, you realise that he’s just different. He’s just not very good with people, because all he knows is racing – and you might feel a little empathy for him.”

For Baker, it was important that his performance as the character who helps tutorialise the basics of Dirt 5 didn’t amount to just another ‘talking HUD.’

“The thing that I’ve always hated as a gamer is when it’s just a talking HUD, you know? It’s like the same information is being presented to me graphically on screen, and you’re just saying the same thing, just more exhaustively,” he says. Instead, AJ should be someone whose guidance you trust on the road, and through your career, the way you would the technicians and engineers who form a team’s pit crew. “If I’m going to listen somebody, not just about how I’m going to race, but how I’m going to play out my career, I want to know who that person is, beside a disembodied voice going: ‘Go get ’em, Tiger!'”

As North and Baker were wrapping up recording their performances for Dirt 5, cities around the world began shutting down to fight the spread of the coronavirus pandemic. While the actors’ jobs were done, the Dirt 5 development team still had a long way to go. Baker said he’s beyond impressed with what the studio accomplished working from home.
“It’s magic,” he tells us. “The same game that we showed a trailer for is the same game that people can play. That, to me, is just… I just can’t say enough about the team for that.”

Dirt 5 hits PC November 6, and you can read our Dirt 5 review if you want to get a taste of what the muddy roads have in store for you.