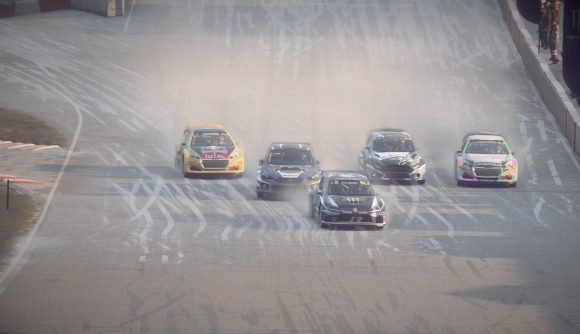 Dirt Rally 2.0 and Sniper Elite 4 will feature new in-game ads that say: “Stay home. Save lives” as a way of offering safety advice to players in response to the ongoing COVID-19 pandemic around the world.

As reported by the BBC, several major UK game developers, including Codemasters, Rebellion, and Candy Crush Saga owner Activision-Blizzard (King), are collaborating with the government to tie into Public Health England’s ‘Stay home. Save lives’ campaign in some of their games, with the hope that it will help the message reach more people. The messages will be shown to players based in the UK, the site reports.

The games will feature this message in different ways, with Dirt Rally 2.0 incorporating it into banners that adorn the game’s roads, which players will see as they race by. Developer Rebellion will display the message in Strange Brigade and its Sniper Elite games via a screen that’s shown pre-gameplay, with PC players also being given a link to a website that provides additional information and advice regarding the COVID-19 virus.

It looks like the message could also being coming to some of Rebellion’s other games, too. “I reached out to DCMS [Department for Digital, Culture, Media and Sport] a few days ago to say, ‘Is there anything we can do?’ the studio’s chief executive, Jason Kingsley, tells the BBC. “A lot of people spend hundreds of hours in computer games. And in this case, we thought we could help society by reminding people of their obligations to others.”

Proud to be a part of the #StayHomeSaveLives initiative in the fight against Coronavirus https://t.co/rJJJ9Cor6r

Oliver Dowden culture secretary, says: “It is absolutely vital that we all follow the simple government advice to stay at home, protect the NHS and save lives. I’m delighted to see the UK’s brilliant video games industry stepping up to strongly reinforce this message to gamers across the UK.”

The DCMS has invited other UK game studios to also join these studios in getting involved in the effort.