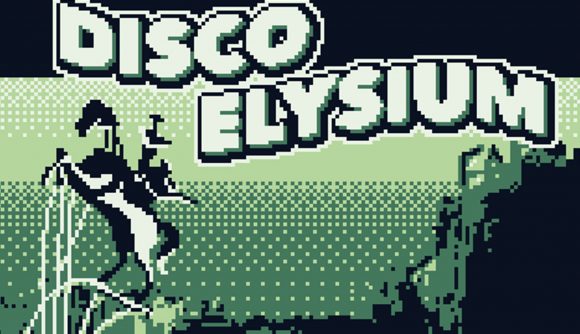 If you missed Disco Elysium on every other platform, you can try it on Game Boy – sort of. A partial Game Boy demake of the indie game has been developed by a fan to commemorate the detective game‘s first birthday.

Available on Itch, Disco Elysium Game Boy Edition transforms the investigative RPG game from a vibrant, isometric environment, to the green and white, top-down view of similar adventures on the original Game Boy. Right now, it’s just the opening section, but the way everything’s been modulated to fit the limitations is a serious feat of game development know-how.

At the start, you choose between three archetypes, thinker, sensitive, and physical, and you still have the ongoing conversation trees with your own psyche. The dialogue retains the same pseudo-philosophical poetry, though obviously pared down a bit for space and time, and the rooms are vaguely the same, if you know the first few areas well. It was built using GB Studio, a name-your-price development tool that lets you build games to the specs of the handheld. No sound right now – creator Colin Brannan is looking for someone to compose a full soundtrack.

To say Disco Elysium, from developer ZA/UM, is a beloved game would be an understatement. Its reviews were some of the strongest of the year last year, and we called it a new standard in RPG writing. It isn’t the only project to see a demake of late – BloodBorne was transformed into a 16-bit Zelda-like, and Super Smash Bros has been made 8-bit.

If you’re hungry for more Disco Elysium, a TV show is on the way. We have the best story games, which might help scratch the itch otherwise.