Disco Elysium is a game drowning in pathos. Everything from its sad colour palettes – like Turner paintings left out in the rain – and its brilliant writing, which laughs so wryly and creatively in the face of the broken city of Revachol, communicates this. Its wretched excuse for a hero is not so much a Fighting Temerarie but a leaking one, being dragged to the scrap yard through a world where the only thing his mind can process is crime-solving.

You know what else evokes pathos? Hardcore modes. Disco Elysium’s just gone and got one (alongside a patch that finally adds an animation to petting the mailbox), stacking an already hostile world even more against you. Checks are harder to pass, dice rolls are rigged, and The Cop needs even more booze and drugs to hold his unravelling mind in some kind of uncomfortable but unified clump.

There’s a thematic harmony here that makes Disco Elysium’s hardcore mode a little more interesting than it might in another game, one in which a cranked difficulty slider might simply force you to keep your head down more to avoid gunfire, or turn bosses into repetitive struggles of attrition. Here, where so much of the game is a slow dance with The Cop’s demons, hardcore mode just presses them a little closer together, sliding his hands down into the small of the demons’ back, and rubbing his swollen beer gut up against their enticing toxic flesh.

It’s a perfect fit, and it’s weirdly bereft of the usual hardcore mode frustrations because Disco Elysium is so good at turning your every cock-up into a sardonic delight. Just look at how the game starts: The Cop splayed face-first with his ass in the air like an infant unable to walk, wearing nappy-like undies and his baby bottle of booze by his side. You’re literally born to fail. 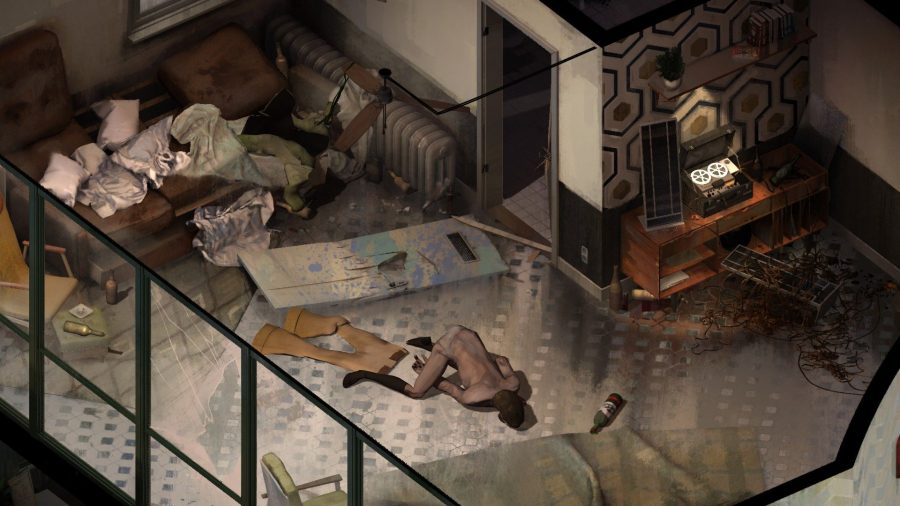 For my first hardcore run (under a self-imposed permadeath rule), I channel my points into physical attributes, believing that absent-minded brutishness would be an effective way of coping with the penury of Revachol. This run ended in about ten minutes when I got fixated on the fantasy of opening a bin with a crowbar, and duly had a mental breakdown when I failed to do so, my humiliation compounded by the Scouse kid shrieking obscenities at me as he threw rocks at a rotting corpse hanging from a tree.

Hardcore mode isn’t as gruelling as it sounds, but some basic preparation is important. Put at least two points into both Volition and Endurance. Don’t behave over-aggressively, and remember that before doing checks, you can back out before committing, change your clothes and consume some substances to maximise your chances of success.

It was a swift and powerful reminder that fixation on anything – fantasies, drugs, the past – is The Cop’s greatest enemy, in this mode more than ever. What brought this man to the brink in the first place was a surfeit of feelings in an unfeeling world, and maybe the best way to tackle it is not to over-engage, but to drift through, like a ghost borne of booze fumes.

So for my next run, I go for high Intellect and Motorics, approaching everything with dehumanised distance. And for a while at least it works, especially once I internalise ideas about the faceless god of neoliberalism. It may not look it from the artillery-blasted, broken streets of Martinaise, but there’s a world of opportunity out there for me; I just need to pull myself up by my bootstraps, forget about the past, and for God’s sake stop bitching about the unfairness of it all. 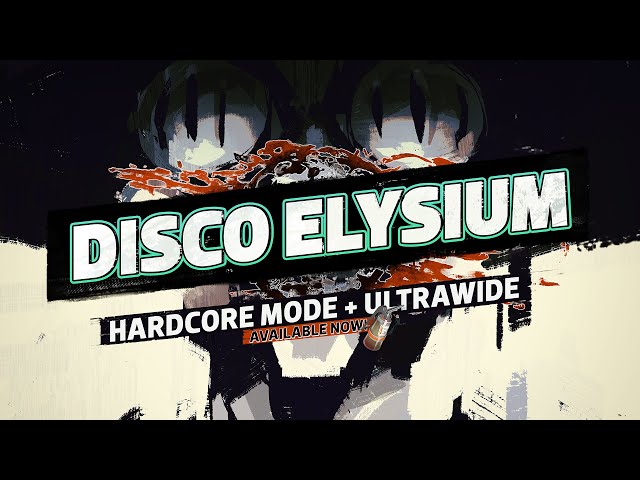 My blithe go-getter attitude not only distances me from engaging in emotionally triggering chats, but also provides a steady source of income; that single real I earn each time I espouse rampant free market economics proves vital in a mode where money is easier to spend and harder to come by.

I’m quite literally selling my soul. But I’m surviving.

This isn’t your typical hardcore mode that hits you like an anvil to the skull. In fact, the early going is deceptively smooth for this dispassionate savant I created. By dedicating myself to ‘the system’ I steer clear of high-risk checks that threaten to vaporise my measly single point of volition and send me spiralling into faeces-throwing madness. 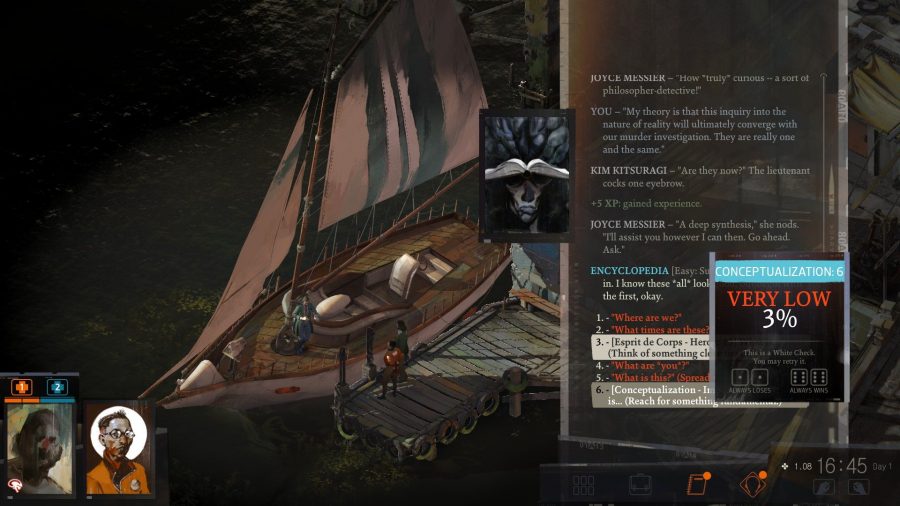 On the off-chance that I do fail such a check, there’s still more than enough magnesium kicking around in bins and boxes for me to quickly bosh before despair takes over (word from the wise: you should start a hardcore game with at least two points in Volition, giving you a precious bit of leeway for failure).

Yes, you get the feeling that everyone hates you more than in a regular playthrough, with NPCs being more reticent and less patient with you, but it’s all still within the logical bounds of how you’d expect the forgotten folk of a broken world to react to a bloated, stinking authority figure wearing – in my case – one shoe and a pair of marigolds. What difference does a little more disdain really make? 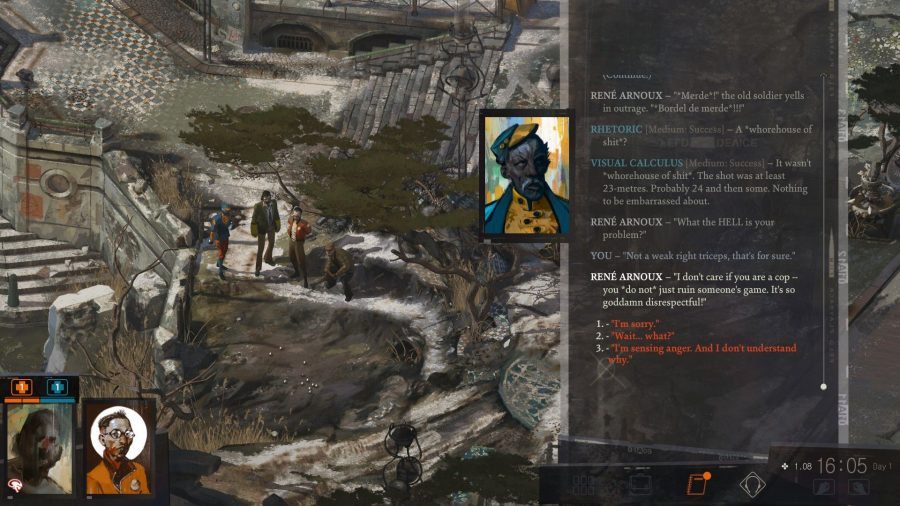 The hardcore mode takes its toll in more insidious ways. There are no extra negative effects for consuming booze and drugs, but my dependency on alcohol increases as I look to muster some Dutch Courage to sock someone in the jaw, or to haul a body from a tree without throwing up. Without giving away the details, this does have an effect down the line, making alcohol an even sneakier conduit for failure than before.

If you do succumb to death or madness, well, that was always a convenient ‘out’ for our wayward hero anyway

And if you do succumb to death or madness? Well, that was always a convenient ‘out’ for our wayward hero anyway, and in a world where failure is so pervasive, there’s something amusing, almost comforting, about embracing it.

So when the meagre sliver of luck the hardcore mode affords me does run out, and I fail in my journey to become an aloof paragon of capitalism by indulging a sentimental thought about the past, I simply smile at The Cop’s mental collapse and think to myself: ‘I failed even at suppressing my own humanity. An apt end for a total fucking loser’. Then I roll again. 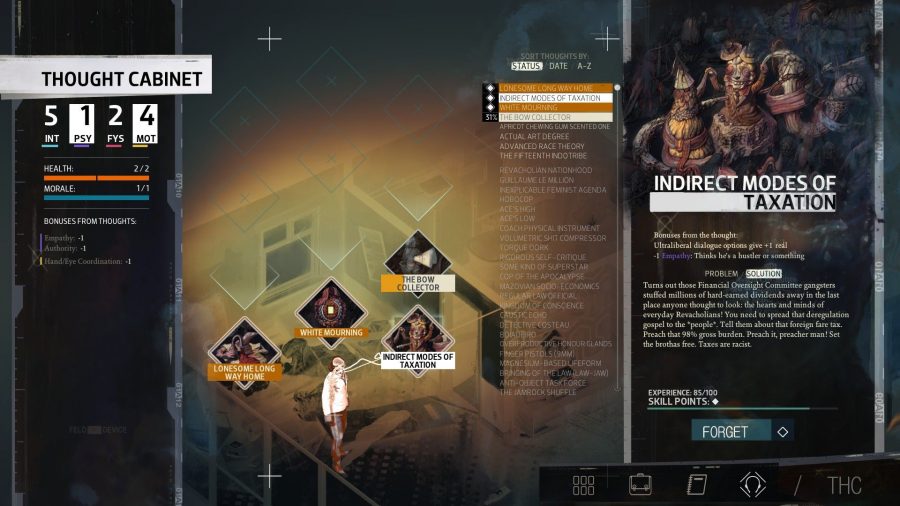 I recommend hardcore mode to everybody, maybe even to first-time players so they can’t circumvent its extra challenges by knowing how things play out.

The only thing that doesn’t quite work is the name, with hardcore mode evoking a life on the edge, teeth-gritting intensity, and bragging rights upon competion. You’re not so much existing on the edge in Disco Elysium, but more in a haze on its peripheries, your washed-out body at constant threat of blending into the background. And if completing this sombre new challenge does give you the urge to brag and flaunt your achievement, then maybe you’re missing the point – a fitting failure in itself.