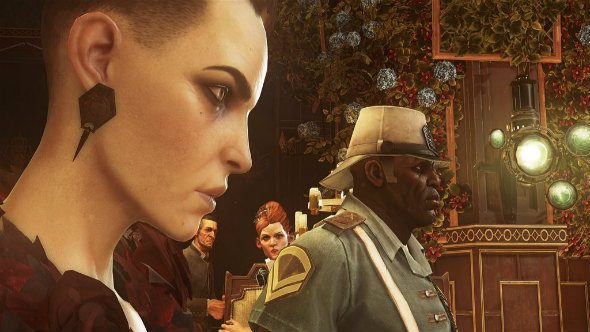 Remember how Dishonored’s Dunwall got more plague-ridden and depressing as bodies piled up in the street? That’s your Chaos rating. When you killed over a certain percentage of NPCs, you were place in a High Chaos world, filled with zombie-like weepers and corpse-devouring rats. It eventually impacted your ending. Dishonored 2 is completely reworking the way the game calculates this rating.

Don’t let the games of the future get the drop on you and sink a blade between your shoulders, check out our list of upcoming PC games instead.

The heart from Dishonored returns. If you recall, this macabre item led you to bone charms and runes, but you could also point it at any NPC and it would whisper their secrets to you.

Dishonored 2 randomises these secrets for every NPC, allowing you to find out something about their character and. You can act on what you hear, if you wish, being judge, jury and executioner.

The game weights NPCs depending on their deeds. So if you stab a nun, that would have a big impact on Chaos, whereas if you murder someone who eats children, this will have barely any affect on the world.

It’s an interesting system and it kind of creates a game within a game. Slipping past guards just got a whole lot more difficult, especially if the guard is a bit of a tit.

Watch co-creative director Harvey Smith chat about it in the Twitch stream below, at around the 43-minute mark.