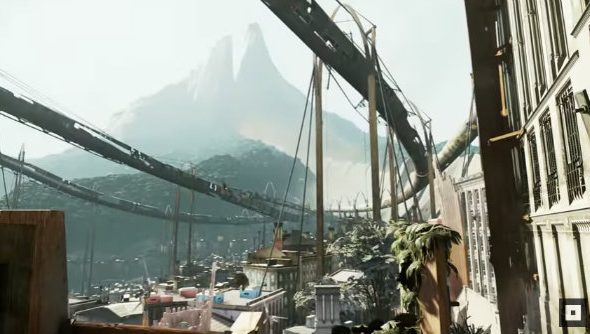 Dishonored 2 just got its first proper in-game footage, highlighting a world powered by Arkane’s new tech, the Void Engine. Arkane say they’ve gone to great lengths to make sure it’s coherent, full of details and stories for you to uncover.

Update: June 13, 2016: You can now watch two missions from Dishonored 2 in action. Just head to 1:47:48 in the Bethesda conference video below to seeArkane co-creative director Harvey Smith presentgameplay featuring Emily’s interesting abilities, including Mesmerise and Domino.

Original story: Dishonored 2 begins in Dunwall – 15 years after the events of Dishonored – with you able to select between the first game’s Corvo and the new empress, the now adult Emily Kaldwin. As the empress, Emily and her father, Corvo, are forced to flee Dunwall and head to Karnacka.

This new location has its own quirks. It’s a wind-powered city and it’s prone to dust storms which can sweep in and reduce visibility for you and for the AI sentries.

Luckily you have new tools at your disposal to deal with any surprises that might be thrown at you. You can now perform a takedown enemies from cover, and dropping attacks can be lethal or non-lethal.

Emily will also introduce a bunch of new abilities, with her ethereal tentacles capable of pulling her around the environment, yanking enemies to her and even pulling and throwing items – like whale oil canisters – around. In the gameplay demo she also shot a man in the arse.

Speaking of shooting men in the arse, it looks like there’s some sort of limb targeting system at play too, though it wasn’t explained during the conference – we just happened to spot the highlighting of body parts at one moment in the gameplay presentation,

Domino looks like it could be a fun power, too. With this you can link enemies together, so when one meets their fate, all the others will meet the same. Think of the mess you could make with a well-placed mine. And since we’re talking about making a mess, Shadow Walk is another new ability and it turns Emily into a deadly shadow that can tear men in half. Nice.

See if you can glimpse any of that new stuff in the gameplay trailer: