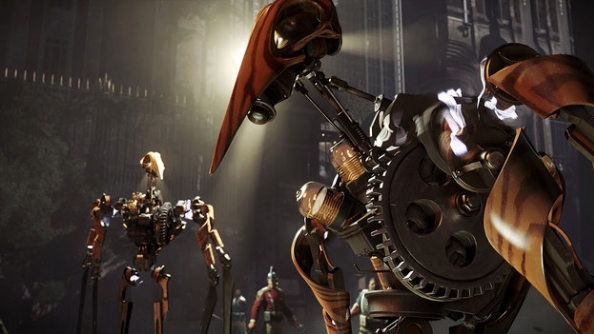 The Outsider is one of Dishonored’s cool supernatural cast members: a shadowy entity who provides you with special magic-like abilities, as well as a… erm… heart that talks to you. He’s making an appearance again in Dishonored 2, but you’ll be able to tell him where to stuff his magical gifts if you’d rather play the game without them.

Want new trailers and briefly considered opinions? Go to our homepage for all your PC gaming news.

you can literally say "no" to the Outsider: "i've had enough of your gifts" #Dishonored2

Bethesda’s Pete Hines has also discussed the feature with IGN on their E3 livestream. “When you meet the Outsider, you can say ‘I’ve had enough of your games, I don’t want your powers’,” Hines explained, “you can play the entire game with no powers whatsoever”.

This choice seems a nod to the Dishonored achievement Mostly Flesh and Steel, which demanded you made no attempt to upgrade your powers. While some areas still required you to use the Blink ability, use of any other power or progressing Blink past level 1 was not permitted. Dishonored 2 obviously takes this further, as declining powers will presumably mean you won’t even have the option to upgrade them. This also presumably means there are multiple routes through the game’s areas, so people without Blink can still traverse it easily.

This seems a very cool addition to an already brilliant-looking game, offering a distinct challenge for people looking to experience Dishonored’s world in a different manner. Without powers it’s basically Thief, right? And we’ve all been waiting for a (good) new Thief game for far too long.