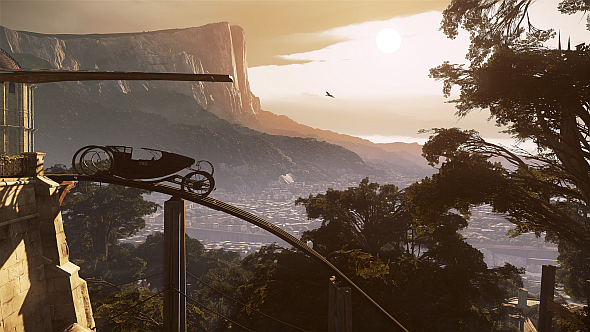 Dishonored 2 is a great game, but its performance on PC at launch was sadly inconsistent, with a number of players reporting significant technical issues. A third major patch has now been applied to the game, squashing more of those pesky bugs.

If you’re the sneaky type in Dishonored 2, why not sneak your way into one of the best stealth games on PC? Remember: be furtive.

Almost all of the 33 bullet points in the patch notes begin with the phrase “fixed a bug”. Among the more significant changes, quick save and load is no longer available in Iron Mode, NPCs don’t get to search for you twice after reloading a save, and five different crash issues have been resolved. Also Jindosh won’t make fun of you if he’s dead any more, the smug git.

There are a few nice visual fixes, too. Talking to Meagan won’t darken the screen any more, aiming focused strike or spyglass at the sky won’t screw with your depth of field, and the journal should stay in crystal clear focus.

Unlike the first two major patches, the third adds no headline gameplay features like New Game Plus or custom difficulties. There have been some tweaks to the UI, and some small quality-of-life additions such as a ‘full’ option for the ‘mana replenish’ setting.

Check out the full list of patch notes here on the Bethesda forums. Have you found technical issues in Dishonored 2? Have you played again lately? Let us know if things have improved.