In the run up to the PCGamesN Awards on December 23rd – mark your diaries, people – we’ll be publishing daily staff picks of the finest games 2016 has had to offer. Today it’s Kirk, who’s stabbed enough necks to know what he’s talking about. This post contains spoilers pertaining to the Clockwork Mansion level in Dishonored 2.

The first time I entered Dishonored 2’s Clockwork Mansion I waltzed in with a grudge. As Emily Kaldwin, I’d played aggressively until now, stalking from the rafters and planning an attack before ever springing it: I’d yank them into rewired walls of light; set them alight with their own whisky bottles; summon my Doppelganger to scare them to death (off a cliff or into some water); link guards’ fates with Domino; and pierce necks like an overexcited puppy made entirely of daggers. My Emily only stopped moving when the rest of the room did. Stealthy aggression, we’ll call it.

For more of this year’s highlights, check our list of the best PC games of 2016.

This playstyle might have been effective for me up until this point, but the clockwork mansion made sure any semblance of planning went out the window – wherever the window was in this shifting maze of revolving walls, clockwork soldiers, smoke and mirrors. Home to Kirin Jindosh, a genius and unhinged inventor, the clockwork mansion is a symbol of its creator’s ego – or as he calls it, “a testament to engineering itself” – filled with switches and pulleys that transform the construction around you. Being brash and eager to get some stabbing done, the first thing I did was pull a lever, immediately causing Jindosh to set his clockwork soldiers on me before retreating. 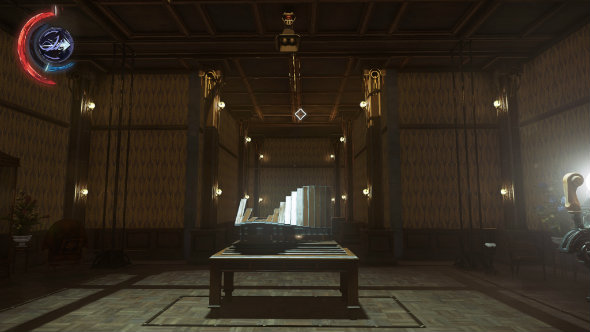 Fighting the clockworks is a completely different experience to slicing the necks of unsuspecting guards, I soon learned. Dishonored 2 introduces you to them two at once. Taking them on unprepared is a scrappy and panicky mess, and you need to throw everything at them to take them down. Even a drop attack when they’re unaware won’t kill them – it’ll just remove their head so they can’t track you as easily. Mines, bullets, grenades and incendiary rounds? They’ll eat them up and keep coming at you, all while Jindosh’s placeholder audio cues are reeling off their current behaviour protocols. They really stick in the mind, those half-arsed voice recordings – little monotone Jindosh soundbites installed to make them readable for their owners, and obviously for the player.

Every fight you have with these towering, mechanical security drones feels completely different, and each scrap is memorable because you’re forced to improvise. When I finally track Jindosh down I’m mid-battle with two clockwork soldiers, and when he lunges at me, I attack and kick him straight over the balcony while he’s in mid-jump. An incredible moment that only comes to pass because I was swinging my sword at an attacking clockwork as he lunged in. He went flying. You should have seen him. 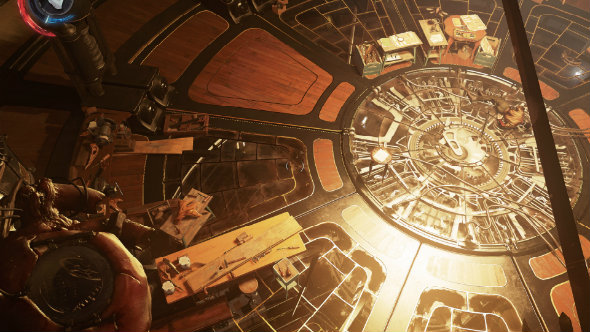 Then, down in the lower levels of this clockwork construction, there’s Anton Sokolov, another inventor who’s been imprisoned by Jindosh in a maze-like cell with moving walls. You have to stand on pressure plates to adjust the walls around you, but there’s a big problem – there’s also a clockwork down there. This clockwork is special, though. Taking it on feels like a mini-boss fight. The clockworks are twice the size of you, you see, and the ceiling of this cell almost touches the top of its head, so your only advantage – your agility – is taken away from you. Easily the most intimidating enemy in the game, it stomps towards you, half battered and probably on-fire, in the dark of the cell. The Jindosh behaviour recordings – now the voice of a dead man – suddenly go from comical to eerie.

Entering the clockwork mansion as a stealthy, not-murdery Corvo was a completely different experience. Instead of pulling the first lever, I shot out the skylight and Blink-teleported up into the spaces between the walls, right into the heart of this machine mansion, dispersing the smoke and shattering the mirrors. There was no need to alert any clockworks as Corvo. Hell, even Jindosh didn’t know I was here – well, he didn’t until I blew up a door to get in underneath him. But even then he never saw me, and neither did the two clockwork soldiers guarding him – not even when I slowed time to retrieve his unconscious body from right next to them. Getting Sokolov out was easier still. Instead of a boss fight, I somehow managed to stand on a pressure plate at just the right time, crushing the clockwork into the low ceiling of the cell. 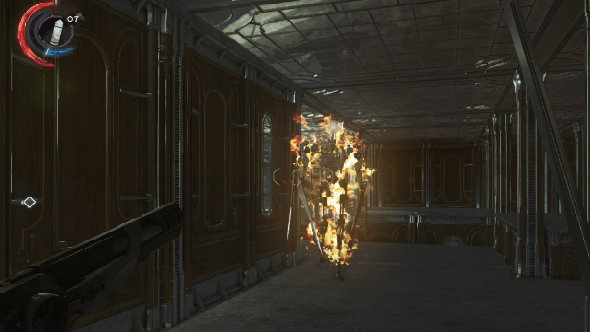 The thing that strikes me the most about the clockworks is how much thought has been put into their AI routines, their attacks, visuals and animations. And yet they’re mostly confined to this mission, bar a couple that show up in the homes of wealthy enemies. It’s this restraint that makes them feel special. Fighting them is entirely optional, too. Some players might choose to ghost through the level their first time and never return – never witnessing their terrifying laser attack, or seeing them flailing blindly when you remove their head. In fact, they might not see the mansion’s impressive engineering either, instead immediately pulling themselves into the rafters and skulking through its inner workings. The clockwork mansion might be a symbol of Jindosh’s ego, but Arkane Studios – the true architects of this complex creation – are fine with you never seeing it.

That’s one of the things I love about Dishonored 2 – there’s so much little detail, yet much of it is completely optional. Take a later mission where you’re granted a timepiece that lets you jump between the past and the present. In this level you explore a huge estate that’s been created across two timelines – you see it in its former glory in the past, and trudge through its dilapidated present day incarnation. Performing a certain action changes the present timeline, too, though I didn’t realise this until my second playthrough. Arkane have built three completely different 3D environments in the same space, across three different timelines, with new textures, NPCs and 3D models, and most people probably won’t even notice. 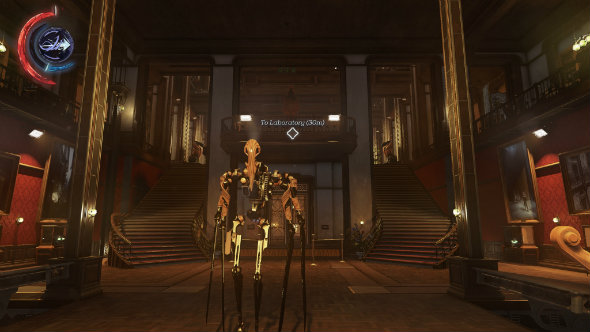 In a world where games often place an invisible hand on the back of your head and swivel it so you’re forced to stare at a set-piece, or where games tease some distant explosion with a button prompt that zooms you in on the spectacle, Dishonored 2 is refreshing. Games are expensive to make and most developers are terrified of you missing anything, but Dishonored 2 is different; it’s layered and it’s best enjoyed via multiple playthroughs. It’s rather telling how confident Arkane are of the game’s core that you can forgo your supernatural powers at the game’s start. It’s a brave approach to game creation and it makes Dishonored 2 far more interesting than anything else this year. Every single playthrough uncovers something new and, crucially, this sense of discovery is left entirely in your blood-soaked – or not – hands.