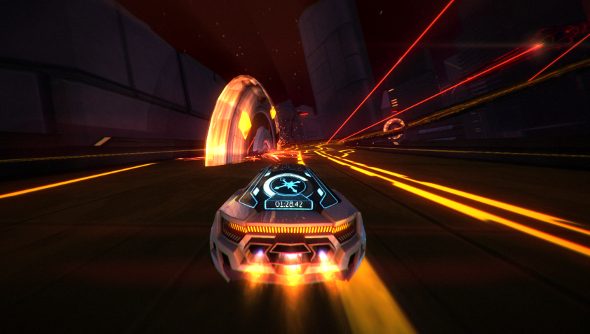 I’m not usually interested in racing games that don’t involve karts and popular Nintendo characters unless they are called F-Zero, so it’s rare for me to get excited about new driving shenanigans. But Distance is weird. It’s an arcade racer where future-cars speed up and down neon highways, leaping, spinning and flipping their way to victory, if they can survive for that long. It’s utterly bonkers, and reeks of cool.

Our Rob took a look at it in the summer, and his thoughts are neatly summed up by the preview headline, Distance: Oh hell yes. Now it’s about to hit Steam Early Access, and you’ll be able to start defying physics on December 9th.

Here’s what the devs have to say about it:

“The roads are treacherous and unpredictable with obstacles around every corner. Instead of doing laps on a loop, you’ll be trying to survive to the end in the quickest time. Since your car has several abilities, it allows you to not only drive fast on the track but also upside down and on buildings and walls! You can also fly to discover new shortcuts and paths. You’ll be able to take on the roads alone, or in multiplayer with your friends.”

The world itself also has a secret history, which players will be able to uncover as they explore it by flying, driving up buildings and shooting down roads.