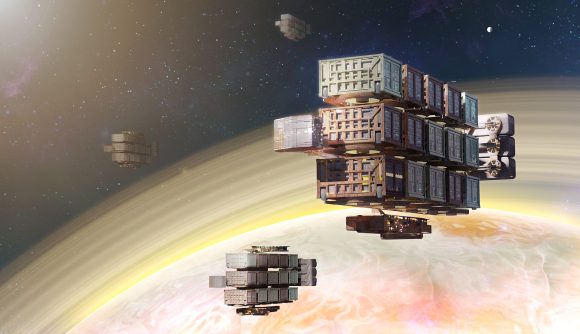 We were quite excited when Distant Worlds 2 was formally announced earlier this year. The original Distant Worlds is a sci-fi grand strategy game that – while rough and ready – has some truly innovative ideas that are seldom seen in these kinds of epic space 4X games.

The sequel is due out later this year, but while we wait to hear more you can at least satisfy your curiosity with some live gameplay. During publisher Slitherine’s Home of Wargamers event today – a four-hour livestream that’s running from 2pm BST / 6am PDT through to 6pm BST / 10am PDT – developers from CodeForce will be showing off some footage of Distant Worlds 2 in action. From the research screen to ship and base customisation, as well as the role of independent worlds in the game, fans will get a more comprehensive look at how everything is shaping up.

The developers will also be showing some early game interactions with pirate factions. In the first Distant Worlds, these raiders provided an early obstacle to overcome, much like they do in Stellaris. In Distant Worlds 2 you can take a non-violent path in dealing with them, instead of the usual extermination.

You can watch the live Distant Worlds 2 demo on Slitherine’s Twitch channel, and the session starts at 4pm BST / 8am PDT:

Other announcements from today’s event include a release date for Warhammer 40,000 Battlesector, and we’re expecting some new game reveals later this evening.

Distant Worlds 2 is due for release on PC via Steam and the Slitherine store sometime in 2021.