Divinity: Original Sin 2 is an exceptional game about trying to overcome impossible odds – demons, ancient evils, even giant blobs of sentient oil. You can pretty much become a god as you level up, unleashing your powers on everything that stands in your way, but no matter how mighty you get, many of the fights will still be tough. That’s no accident.

Developer Larian Studios engineered its RPG to offer challenges throughout that are daunting at first but can soon be beaten with a bit of experimentation and gusto. What’s truly impressive, however, is how there are so many different ways to approach each fight, all of which stem from how you build your character. You can be a fire-wielding battlemage, for example, a shape-shifting warrior, or even an archer with a penchant for summoning. Each build feels as ferocious and viable as any other, which is indicative of the remarkable balancing act Larian managed to pull off in Divinity 2.

So how do you give players the tools to almost break your game open while still keeping it both challenging and fun? One person who can speak widely on that is the game’s systems designer Nick Pechenin. He’s the man at the heart of the complex web of interactions that the Divinity series has become known for. He reveals that while many of the series’ systems are capable of producing absurd results – upon which much of the games’ humour is built – there’s little post-release tinkering to speak of as they’re locked down at the start of a game’s life cycle and usually remain unchanged.

But it does happen occasionally. The most striking example of something actually getting patched out comes in the form of a two-skill combo: Chicken Claw and Rupture Tendons. This combo allowed you to inflict a status that hurt enemies when they moved, then turn them into cowardly chickens who would run about as fast as they could. It did an absurd amount of damage and was a lot of fun, but it wouldn’t last. It turns out there were two reasons for this. 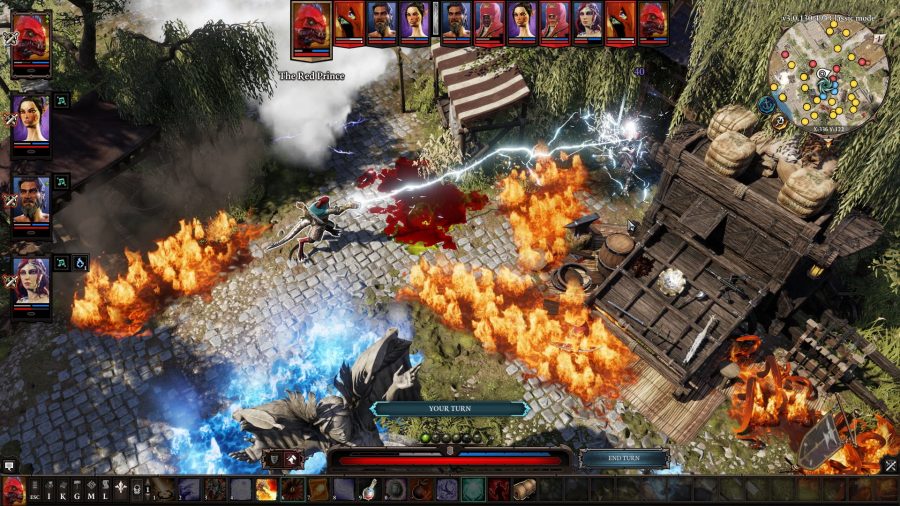 “For one, we felt like the players had enough time to make all the gifs they wanted, and this reliable combo wasn’t giving other great combos time to shine,” Pechenin tells me. “There was also a more technical reason – the chicken is much smaller than most humanoid characters and tended to randomly run into tight spaces, where the original character would get stuck afterwards.”

It wasn’t just that the combo was too strong, then, it was also stifling other, equally barmy options. One such example is to choose to become an undead geomancer, which means poison heals you, so when facing a toxic gang of wretches their attacks make you stronger – then you can add insult to injury and set them ablaze. There are loads of these combos to discover. Balancing them with everything else in a game like Divinity requires a great deal of finesse, so where does Larian even begin this process?

“We factor in some amount of exploitation on the player’s part into the core balancing formulas,” Pechenin says. It’s almost as if they expect us to try and break the game. Many people manage to, of course, one infamous instance of which is the Divinity: Original Sin speedrunning technique which involves filling a chest with items and then lobbing it at the final boss for an insta-kill. This discovery shocked the team at Larian as much as it did the game’s community. 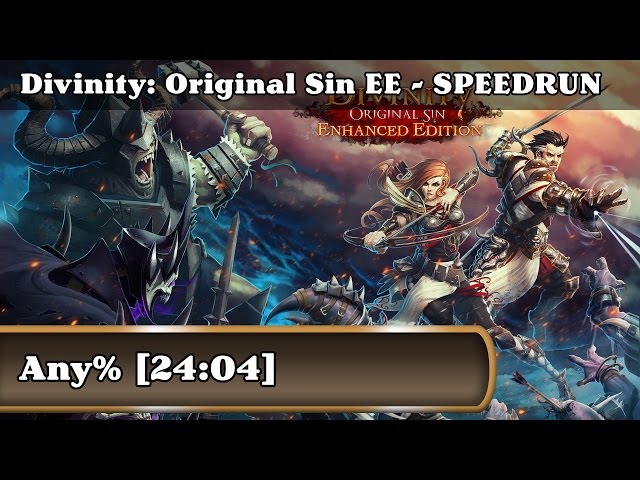 “It’s important for us that there are things in the game to truly discover that weren’t pre-arranged by us,” Pechenin says. “This means that while we don’t intentionally place one-shot combos into the game, we do create a thick soup of interacting effects and mechanics that’s very likely to contain some. Some are found during development and get contained in some way. Like, you can teleport a patch of lava around Reaper’s Coast, wiping out almost everyone, but at least you can’t take it with you into a cave or into the next act.”

Larian Studios is busy working on its next Divinity title but this one is a little different to the two that came before it. Fallen Heroes is a mission-focused detour that branches off Divinity's story and focuses on tight, XCOM-like combat. We can't wait to try it.

Finding these exploits makes for some of Divinity’s most memorable moments. That fact plays on the minds of Larian as the devs try to work out what to remove when balancing the game, knowing that leaving an exploit in could lead to a serendipitous delight. “In a game as vast as Divinity, there’s always a chance that some exploits will make it into release, and we’re lucky enough to have dedicated fans that will figure them out. So when someone finds an infinite damage combo, they can tell from the tanking frame rate that they might be the first ones ever to come up with it. There’s always a commotion in the office when a player posts a video of a crazy exploit, we love this stuff.”

As you can probably imagine, a game like this has to be QA tested continually in order to make sure none of the interactions are too outlandish. But how does Larian even approach that? There are so many different skills and effects to consider, not to mention the environments and the many reactive objects dotted around inside of them. 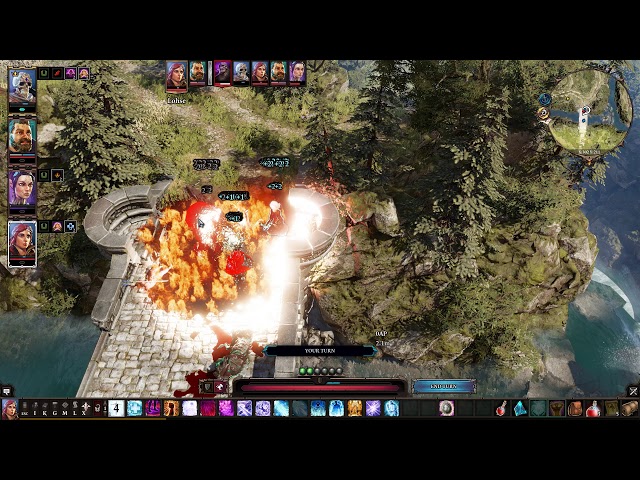 “It’s a question we keep on changing the answer to because, with every game, we learn how and what to improve,” senior producer David Walgrave tells me. “There are different types of QA. We automate certain tests, but not everything can be. There are a lot of things you can easily QA with checklists. For instance, there are rules for items, so there are checklists for items. That way we try to make sure the easy-to-spot bugs are found and flagged.”

Something that also helps to lighten the load, if only a little, is the game’s structured world design, as it means the testing can focus on the most plausible paths. While it’s open in nature, Divinity’s world bottlenecks players at certain points, and offers optional hardcore fights for the hardy. “The player is mostly free to skip content if they feel they want to be challenged, even go to the next act early,” Pechenin says. “And fights like Alice Alisceon in Reaper’s Coast are there for the overpowered players to fight somebody their size.”

Larian makes an effort to cater to the different levels of challenge that its varied playerbase is after. Hence the existence of the Lone Wolf talent, which turns a party made up of only one or two characters – rather than the standard four – into monstrous powerhouses. “Playing with a Lone Wolf party is one of my favourite ways to play the game in a relaxed way,” Pechenin says. “The basic idea is to pack the action economy and skill variety of four characters into just two and increase the game’s pacing. 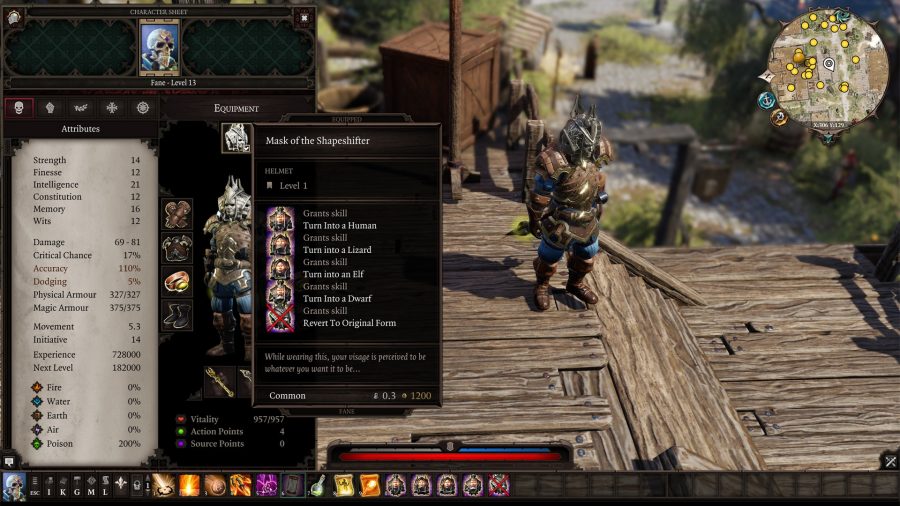 “Crowd control abilities can be much more dangerous for a lone wolf and they get fewer item total bonuses than a full party, but on the other hand, they have an easier time chaining their skills, which is generally how you win. So, in the end, it was a matter of tuning the average survivability in combat and making sure this all holds up in the endgame.”

When thinking about the difficulties of balancing Divinity, it’s the smaller aspects like Lone Wolf, which dramatically change how its combat scenarios work, that spring to mind. Then you have to consider that this is only one way to play the game, and there are several other possibilities, many of which are just as radical, threatening to pull the game apart at its seams. It seems that the way Larian deal with it all is to embrace the engine of possibilities that rumbles beneath the game’s surface. This explains why the Teleportation Gloves in Divinity: Original Sin 2 exist in such wicked form.

Can’t get enough? Play through the best RPGs on PC

“Over the years there were many ideas for how to limit, reprice, or postpone [the Teleportation] skill,” Pechenin says, “but it’s just too much fun to get it in your first few hours and use comfortably in every combat scenario since then.”

The Divinity games allow you to become overpowered simply because it’s fun. It’s rare for a developer to have this attitude towards exploits in its games – especially in an age of huge online games that are easily spoiled by them – but that’s part of what makes Divinity so entertaining. It’s made by a team that doesn’t want to take away the best toys it’s created – it wants you to embrace the hilarity and spectacle they make possible.