Divinity: Original Sin 2 became Larian’s second successfully funded Kickstarter project last week, as well as its most lucrative. For the final days of the campaign, I was in their studio in Ghent, Belgium, watching as the team continued to work ceaselessly, despite having long-smashed their original goal.

Want to see what we think about the game so far? Check out our Divinity: Original Sin 2 hands-on.

Larian Studios have been making games since 1996, cementing their name as an RPG studio with 2002’s excellent Divine Divinity, and its follow up Beyond Divinity. Since then, the Divinity series has been the studio’s bread and butter, and has included third-person RPGs where you can transform into a dragon, and the experimental Dragon Commander, which merged tabletop empire building with RTS battles. 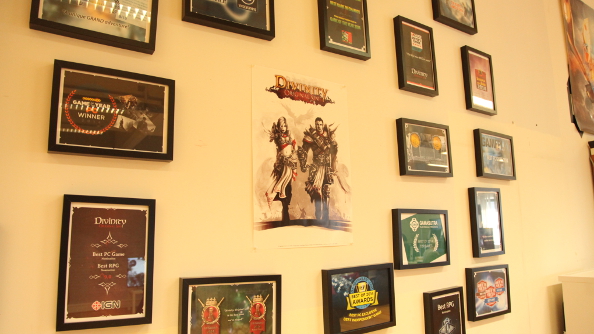 Some of the games reviewed well, some sold well, but with Original Sin they made a game that did both, and had the benefit of a community that grew around one of the first big RPG Kickstarters.

Given the success of that first campaign, it was not a surprise to find out that Larian was heading back to the realm of crowdfunding for the sequel. But Kickstarter’s changed since they first used it, and attitudes toward crowdfunding have turned sour.

Larian had enough money to finance a sequel themselves, but if they wanted to outdo their previous game, they’d need help from Kickstarter. “It allows us to make bigger and better RPGs,” CEO and creative director Swen Vincke explains.

On the morning before I headed to the studio, I quickly checked the Kickstarter page. Only two stretch goals were left. I thought that, perhaps, this would be a relief for Larian, that as they approached the last straight they’d be able to take a load off. The opposite was true. 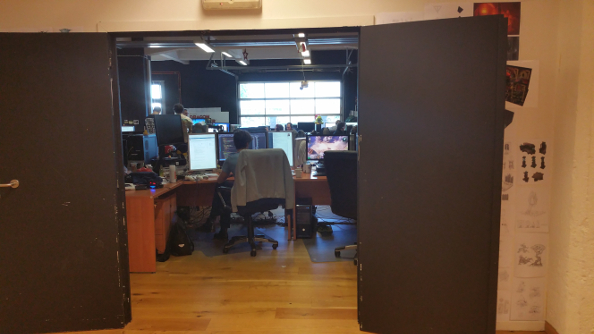 Part of the team, including Vincke, were returning from TwitchCon after a long month of promotion and development. Exhausted, light on sleep and cursed with jet lag, they returned to work. For some, that meant heading back to the bullpen to continue work on Divinity: Original Sin 2 and the Enhanced Edition of the original game, and for others it meant spending time with the big community that has grown around the series.

As I fought and chatted my way through Original Sin 2’s demo, Larian were setting up a livestream that would run, mostly uninterrupted, for the rest of the campaign, the next 24 hours, and then continue even after the close of the Kickstarter. You wouldn’t know that it had been a tiring month for Vincke and his team as they entertained backers and fans by going through the history of the studio, showing old games, and answering an endless raft of questions.

This level of communication might be necessary for Kickstarters now. “It’s a little bit like how publishers select games,” says Vincke, with the developer needing to keep them aware of what’s going on, in the loop at all times, but there’s a lot more room to keep the original vision in tact. 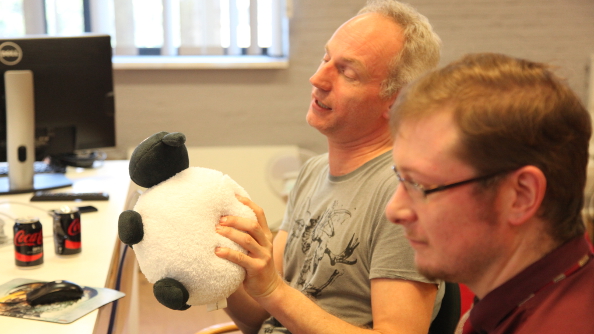 It seems to come easy for Vinke. Even when dead on his feet, he appears to be full of energy, and he loves talking to the community. He recognised a lot of people from their Twitch handles, remembered people from the first game’s campaign, and he talked about them as if they were part of the team.

Perhaps that’s because he owes them a lot. He talks about other RPGs, like Dragon Age: Inquisition and The Witcher 3, with their huge budgets and well-known franchises. “Anything that gets us closer to that is probably going to get us a better game in the end,” he tells me. That was the impetus for the Kickstarter, to close the gap. And that meant a bigger budget, bigger teams, and even a new writing team in the new office in Dublin.

When I left after that first day, the pledges had already risen dramatically. By the time I returned to the studio, every stretch goal had been met, and there was still quite a bit of time left. The livestream continued.

The PvP was being shown off, and Vincke was challenging people to duels. There’d been a tournament the evening before. The arena, where players who are otherwise allies can fight their friends without being labelled ‘betrayer’, was where all of this was going down. It’s an experiment that seems to have paid off, and the Kickstarter has been a source of numerous new ideas that the team’s been eager to try their hands at. 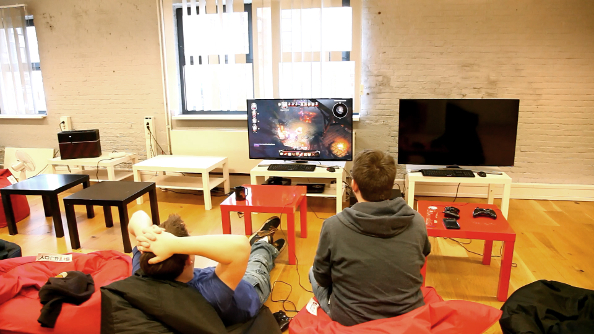 Game Master mode, the final stretch goal, is one such experiment. It’s not a flight of fancy, however. It makes the game feel more like a Pen and Paper campaign, which has always been the goal, and which the extra funding can now make a reality. And it ties into the increased co-op cap, which now means four players can go on an adventure together.

At 3PM on September 30th, the Kickstarter ended, with 42,713 backers pledging $2,032,435 on top of the Paypal campaign. As the entire team gathered, sharing a drink, and as Vincke gave his speech, toasting his compatriots, they didn’t shut down the stream and make it a private affair. Instead, more windows appeared, showing the Russian, Quebec and Irish offices also celebrating.

It was a party for the backers and fans of the series as well as the developers. 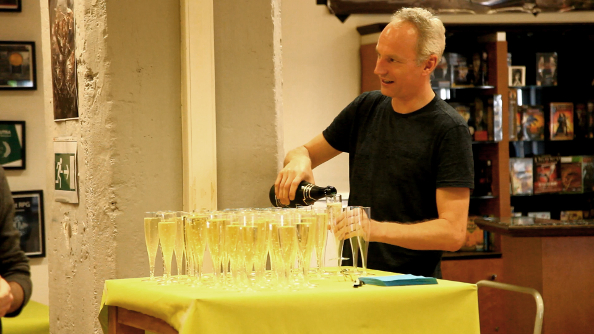 When Kickstarter first began making waves, there was this amazing promise: that developers and gamers could come together and make great games without the interference of publishers. It was the promise of community. I, no doubt like a lot of you, have become considerably more cynical about Kickstarter, but it’s clear that in some cases that promise is still being upheld.

“There seems to be a little more cynicism when it comes to Kickstarters,” Vincke agreed. “Luckily for us that didn’t materialise. I think people have become more wary of projects to back because there have been all these failures.”

And not just failures, but extra pushes for more money, huge delays, games being split up in smaller games – even when a Kickstarter is successful, it doesn’t mean that the game will come out, or come out in the state or in the timeframe that backers expect.

There’s also the matter of the budget, and how trying to hit that all important funding goal can lead to over-promising. It’s something Peter Molyneux, with the benefit of hindsight, mentioned when confessing all the mistakes he made with Godus. “There’s this overwhelming urge to over-promise because it’s such a harsh rule: if you’re one penny short of your target then you don’t get it,” said Molyneux. 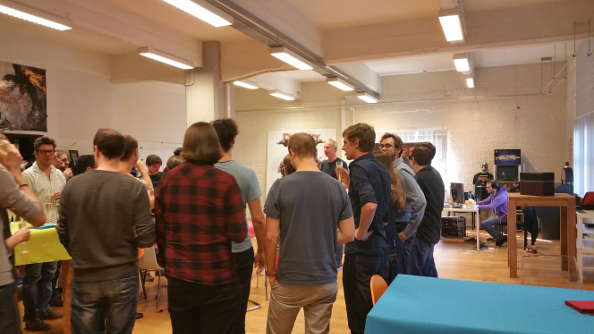 You have to have a good handle on the budget before you put that number up there on Kickstarter. And it needs to be reasonable. You can’t just make it up, but you can’t ask for too little, either. Promising to make an epic RPG on a $50,000 budget isn’t going to engender much confidence.

The party continued as people watched on Twitch. It was a gamer party, though. I won a few rounds of Street Fighter Alpha (it’s all about sexy Sagat), and turned around to see everyone gathered around the three monitors that had been set up for the stream. A Gang Beasts brawl had kicked off.

I started to wonder about community again, as I watched the developers stream a game that wasn’t theirs. Gang Beasts is in Early Access, and it wasn’t the first in-development game that Larian made a shout out to while I was there. Crowdfunding, Kickstarter and Early Access seems to have spawned a community of developers as well as backers. 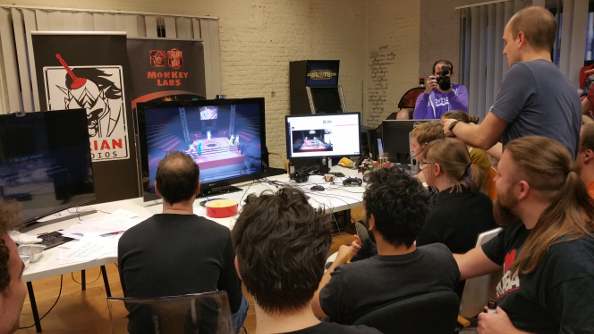 Vincke talked about other games that he’s been excited about. He wanted to see their Kickstarters succeed and wanted to get the word out. After all, they are all on the same tumultuous adventure. It’s harder for some than others, however, and I’m sure I wouldn’t have the energy to be constantly switched on, always engaging throughout a campaign.

Given all that extra energy that’s needed, I found myself unsure if the Kickstarter model could be used by a developer indefinitely. For Larian, Vincke’s not sure if Kickstarter will always be necessary, but he’s seen the results: games getting made that never would have been only a few years ago, bigger budgets that allow smaller studios to create just as much content as their triple-A counterparts, and a community of fans that gathers around the game from the first day of the campaign.

Kickstarter obviously still works for some developers, despite increased caution and appropriate cynicism from potential backers. It’s clear, however, that a studio can’t just rely on promising a fascinating game or making a great pitch. Even Larian, with their previous Kickstarter success, needed to pull out all the stops to raise all the money they needed to build the game they wanted to make.

Thanks again toBenoit Reinier for taking extra photographs for me on his fancy camera.