The CRPG is a PC genre. It has always been that way and will remain so for some time, and not just because of the legacy of icons like Baldur’s Gate and Neverwinter Nights. Pick up Larian’s masterpiece Divinity: Original Sin 2, arguably the pinnacle of the genre today, and it’s soon abundantly clear that PC is the best place to play it.

Its intricacy is one reason. The character creation screen alone doesn’t pull its punches in this regard – there are just so many unique combinations of character looks and builds to try out (mine’s a custom human archer with awesome armour and a soldierly ‘tude). Get into the game proper, and the sheer immensity of it all stretches out before you.

We’re not just talking about its scale, many side quests, and involved narrative here. The tactical scope of its rewarding turn-based combat system is also humbling. Divinity: Original Sin 2 is what a modern CRPG should be, with all the complexity you’d expect (and, let’s be honest, demand).

To properly access such depth and squeeze it for its full value, you need all your options literally at your fingertips. That is, with a PC setup on your side, and the precision and many hotkeys offered by a mouse and keyboard.

In the interest of total disclosure, I did try to tackle Divinity: Original Sin 2 the game on my PC using a Steam controller, I suppose for some of the reasons a Switch version is so darn tempting – ease, comfort, and the chance to play slumped on my sofa rather than hunched over a keyboard. It turned out to be more encumbering than I was happy to accept, especially knowing how much better it could be – mouse and keyboard simply gives you the tools you need to grapple with everything the game offers, which is lots. 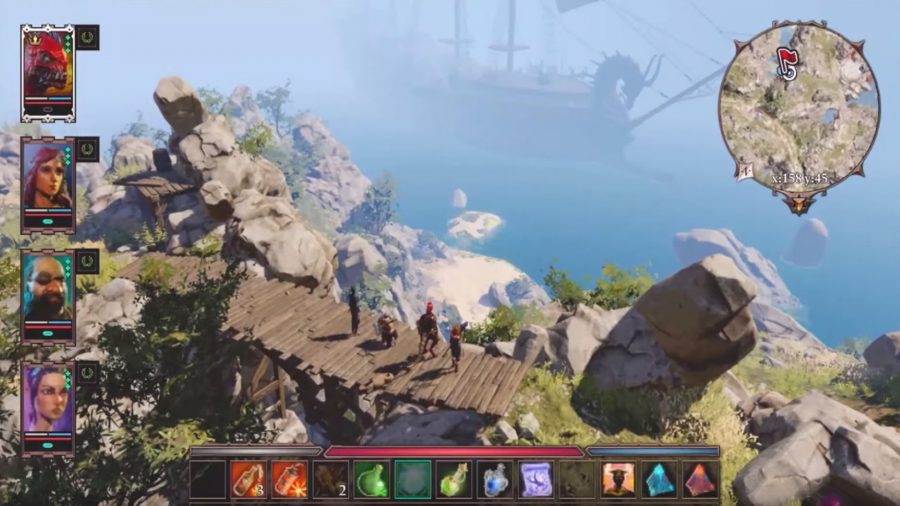 Or so I thought, before diving into the Switch version. Having now tried the game on Nintendo’s miniature but mighty console, and experienced the power to just pick up where I left off on the go thanks to its cross-save with Steam, I think the game’s scope for fun has only grown.

I was certainly sceptical about whether the Switch would do justice to DOS 2, tantalising as that cross-save sounded. But it does. From a technical standpoint, no, the graphics don’t match those of the PC version (how could they?). No, it’s not as easy to traverse the world with the Switch’s small screen, toggles, and buttons, especially as I do find it a little less ergonomically friendly than a really good mouse. The combat is also a touch more fiddly without a deck of keys in your immediate reach.

But Divinity does still shine on the console. It’s fluid, it’s clean, it’s got impressively rapid load times – ultimately it still feels like the same game, just slightly less polished. And of course – it’s got that cross-save.

I never could have anticipated how seamlessly cross-save functionality could work between platforms so (seemingly) antithetical to one another in their basic approach to videogaming. But what Larian and the clever devs behind the port, Blitworks, have achieved with DOS 2 is fantastic – it really is as simple as firing up your game on one platform, then play, save, change platform, load, play, save (repeat) between the two.

I asked Michael Douse, director of publishing at Larian, how the Switch cross-saves came to be. He revealed that, while it was a tricky feat in a technical sense, Valve and Nintendo jumped on board, helping to make it the best it could be. “Literally everyone was excited about the idea. Everyone at Nintendo was super into it, and everyone at Valve was into it,” Douse says. “The fact that Valve had an engineer who worked with us on this, and Nintendo were talking to Valve, and everyone was talking to us was actually quite soul-affirming. 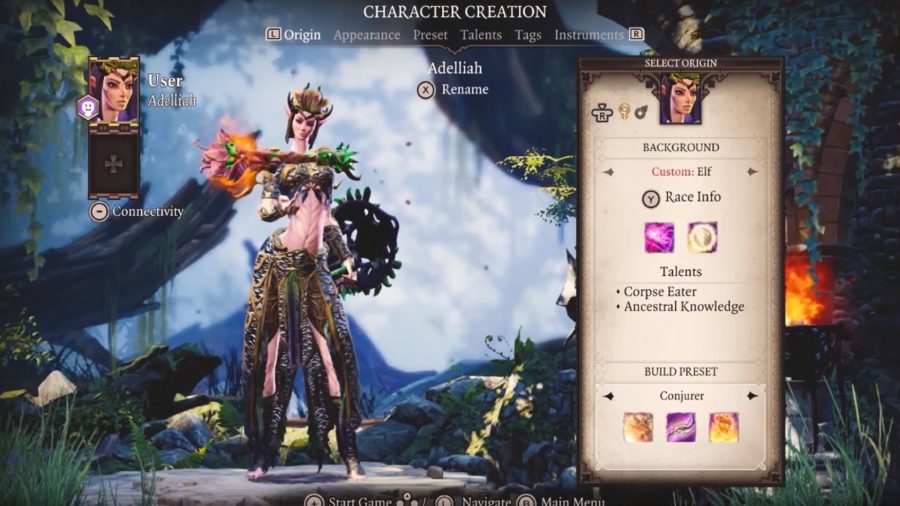 “Despite being massive enterprises, the whole thing – in how open and willing it was – felt quite indie. You could tell that everyone really cared.”

You can tell this in the finished product too. DOS 2’s cross-save works by linking your Steam account on your Switch (you’ll get prompted) – just follow a few simple steps, and you’re up and running. And it just works. In less than a couple of minutes I was haring around Rivellon, backchatting Magisters with my thumbs, having done so with my mouse mere moments before.

The convenience of this, especially for those of us who are often time-poor and sometimes struggle to fit gaming around the demands of daily living, is clear. You don’t have to start a new game, you don’t have to find an extra 100 hours to sink into it – you just continue. When so many of us have time to spare when commuting or travelling for work, this kind of cross-save means mobile gaming can finally complement the chance not just to pick up a game for some time-killing, but to jump back in to something longer form, more engaging and demanding that you’re already really invested in. That’s worth breaking the trumpets out for.

Douse offers his thoughts on this, saying “it doesn’t take an Excel sheet to understand the world is changing in terms of motion. We’re busy. Far too busy. You’re probably too busy. Players are too busy. Society asks a lot from us, and increasingly so. I think it’s a safe assumption to say ‘Hey, people probably wanna take this game with them.’” I think this touches on the crux of the Switch-Steam cross-save’s appeal, but portability isn’t the only boon. 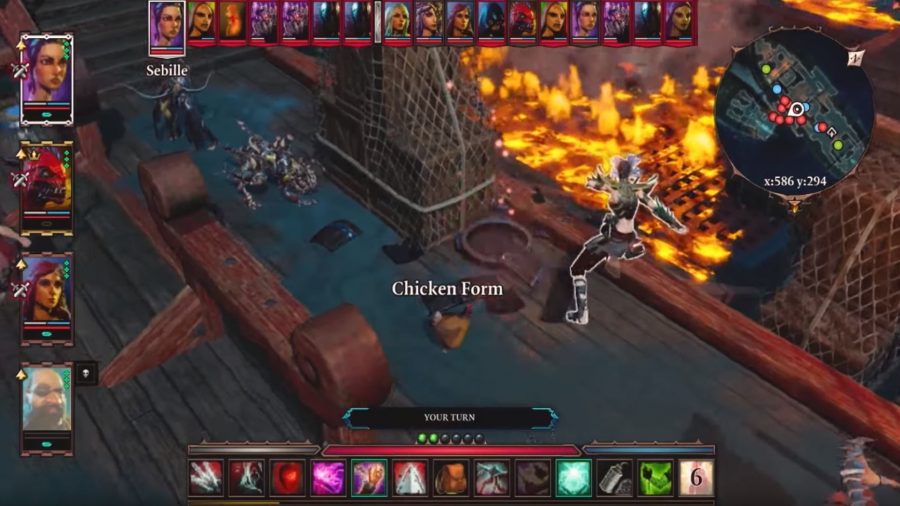 It also signals an important shift, of which Larian’s acknowledgement may prove astute, about how gaming will work in the coming years. The investments we’re seeing now in streaming services are bets by massive corporations like Google and Microsoft that the ability to hop on and off (and on again) across platforms without limits will become essential to our gaming habits. Whether players will agree with respect to those services is still an open question, but for me, the value of DOS 2’s cross-save with Switch – even for PC players – is immediately clear.

Larian’s tapped into this early, and in my estimation, it’s a big moment as much as it’s a big win for fans of the game. “The world is changing, and I cannot envision a future where you’re locked down to one place when you’re gaming,” Douse says. “What we’re trying to do is get ready for this shift, so that when trends change, we don’t have to change our content.” It’s worth noting at this point that Baldur’s Gate III was announced at Stadia’s game showcase in June. “We want to deliver in-depth, real RPGs, essentially forever. I will never buy the idea that our content has to change for any specific platform. The players are there; it’s our job to find them.”

It’s not a directly comparable experience. Like I said, CRPGs are a PC genre, and we all know that for the full Divinity: Original Sin 2 experience, I’ll need to find some time for an extended PC session. But the chance to take on the Voidwoken while sitting on the train is a welcome and increasingly important one. Douse says “I do secretly hope that the Switch version goes in some way to bringing players back to deeper RPG experiences,” and I think it might. The future of RPG-ing on the move looks bright. Now, if we could just get a Switch-Steam Skyrim cross-save…