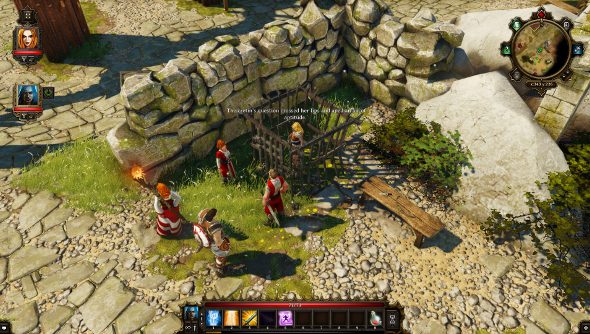 When Divinity: Original Sin launched at the end of July, it was great. A clever, sprawling RPG that took the best bits from classic CRPGs while never feeling like it was cashing in on nostalgia. Larian’s already shifted 500,000 copies, and it’s a well-deserved success.

But the developer isn’t done with it yet. Today saw a massive update being implemented with some new features, polish and a slew of bug fixes. But far more interesting is the new, completely free DLC: The Bear and the Burglar, which adds two new companions for the Source Hunters to recruit.

The Bear and the Burglar can be downloaded now, by everyone who owns the game. It adds Bairdotr, a ranger ally armed with a bow and claws, who is on a quest to save her mentor: a druid of Homeforest. Somehow she’s immune to the troublesome “rot”, which is just wonderful, as it’s an utter pain in the bum throughout much of the game.

The second companion, the burglar, is Wolgraff. He’s a sneaky rogue who at one time tried to become a Source Hunter. When he was knocked back, he turned to a life of crime. Larian says he’s a quiet fellow, but that’s alright, because his dagger does all the talking for him.

Wolgraff and Bairdotr’s inclusion means that you can cover pretty much all the bases with the companions. There’s the warrior, mage, ranger and rogue. Of course, Original Sin’s freeform character progression meant that their absence at launch didn’t leave too much of a gap – but more characters are always welcome.

One of the big new improvements that’s arrived with the update should make co-op games just a little bit more enjoyable. Previously, if your chum was in a conversation and you were somewhere else, you couldn’t read the dialogue as it happened. Now you can. But if you’d rather just bugger off and do your own thing, you don’t have to listen – it’s a choice.

An extra layer of polish, with skills and spells getting new animations and effects and a long list of bug fixes rounds out the update. You can browse the full patch notes here.

If you fancy taking the new companions for a spin, you’ll need to start a new game – if you actually needed an excuse.