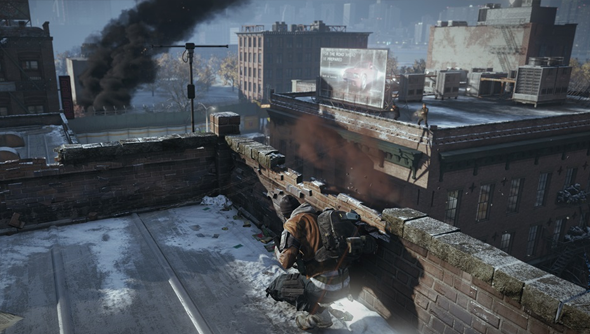 We’ve still seen little of Ubisoft’s The Division besides what they showed at E3. The studio’s likely waiting till it’s got Watch Dogs out the door before they expand much more on the workings of their dystopian open world shooter. Still, at last night’s VGX event, Ubisoft released a trailer of the game’s Snowdrop Engine in action.

It’s mightily impressive. The engine’s procedural destruction isn’t up there with Battlefield’s destruction but I’m saying that to keep your hopes low. It’s a very cool system as you can see in the trailer below.

Lighting effects are always very lovely to see – Epic have made their bread and butter on such things for years – but it’s the engine’s procedural destruction and dynamic material shaders which look to have the most impact on the game.

Your bullets will make holes in walls, burst car tires, shatter windows, and generally play merry hell with the work of interior designers. If ballistics have penetration, as these effects suggest, it shows that you may be able to shoot foes through thin walls. It’s a small feature but it would work to embed you better in the rough world Ubisoft aim to create, especially if there were some level of persistence to the game, too. We know that you play the game as part of a sharded world with other players, if your firefights were to remain in evidence on repeated visits to areas – even if they were instanced only to you – then you’d feel you had a place within the world.

The dynamic material shaders may not seem like much more a graphical nicety but the effort Ubisoft have gone to to show a world that can change with the weather suggests the importance that the environment might play in the game. Blizzards and drops in temperature may force you from the streets and the level around you would reflect the danger stepping into the cold presents.

The Division still sits in that space on a release schedule where so little about it is known that it can be easy to speculate far too much on what is possible in the game. All we can take for sure from this video is that Ubisoft want The Division to look really pretty. Hopefully those pretties will have a bearing on the game but we don’t know that for sure.