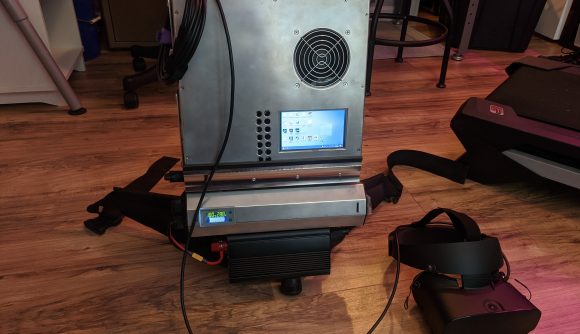 It’s technically possible, we suppose, to strap just about any PC onto your back and say that it’s portable – in fact, we’re pretty sure that’s the moral of the story in Death Stranding. But most of us would prefer to have something a bit smaller than a full-size ATX case tied to our backs, particularly if we’re trying to get a new high score in Beat Saber. One redditor has put his DIY skills to the test and created a VR-capable gaming PC that fits comfortably into a fairly comfortable-looking backpack frame.

Redditor Davegus91 decided to build a PC that solved the cable problem presented by high-end VR headsets like the HTC Vive or Valve Index. Having to be tethered to your desktop PC is a problem for VR games – but that problem goes away when the PC moves with you. Davegus91’s challenge to himself was to get enough hardware stuffed into a small form-factor custom case he’d built to power VR games, and he seems to have pulled it off.

Davegus91 built his case out of 0.08″ aluminum sheeting back in 2018. He had custom mod his power supply to add a power input pigtail and convert two eight-pin connectors to PCIe, shortening everything to fit into the slim case, which measures 56mm x 274mm x 313mm.

You can see a photo gallery of the backpack setup here, and a photoset detailing the case building process here.

The current system includes an i7 9700K that’s running at 4.7GHz (3.8GHz on battery power), and a GTX 1070 graphics card. It’s controlled by a five-inch touchscreen that lets users log in to Windows and perform BIOS operations. Then there’s a 24-volt 14ah lithium battery running through a 24-volt sine wave inverter, which lets him move around with the case slung on his back.

The case itself clips snugly into the custom backpack frame, thanks to a secure clamp on the bottom (above the inverter and battery pack) and a pin system at the top.

Sure, Alienware may have made something along these lines, but we like Davegus91’s choice of aesthetics and plucky DIY spirit.

Davegus91 says the system gets about two hours of playtime in “something heavy” like Half-Life: Alyx. He doesn’t mention whether the shiny pack can pull double duty for Ghostbusting duty, but it looks like it might.