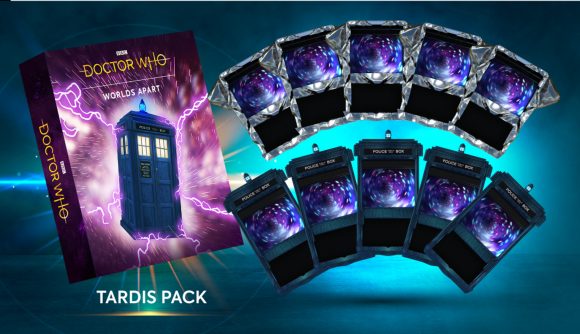 Free-to-play multiplayer game Doctor Who: Worlds Apart will be hitting PC and mobile next year, but fans can start their collection now. Packs of the cards can be purchased as of today, allowing you to start searching for your favourite characters from the sci-fi show.

From right now, you can pop over to the Doctor Who: Worlds Apart site, and pick up some cards. Four separate packets can be bought – TARDIS, Core, Premium, and Exclusive – each containing between five and ten characters, objects, and moments from the nearly-60-year run of the series. As with any card game, rarity matters, and a marketplace for trading will feature in the formal launch next year. Blockchain technology ensures no ownership dispute, or copies.

Worlds Apart is developed in collaboration between BBC Studios and Reality Gaming Group. Players take on the role of a Time Lord, the race of the titular space-time exploring hero, and build decks to outsmart, outwit, and generally outdo opponents. “We are tremendously excited to be working with BBC Studios to bring Doctor Who’s huge global community an exciting new digital experience based on a pastime we all know and love – trading cards,” Morten Rongaard, Reality Gaming Group co-founder, says. “The cards used in Doctor Who: Worlds Apart are both functional and collectible, so fans can actually own a piece of the game while they play.”

Specialising in games about trading and collecting, Reality Gaming’s other projects include cute collect-’em-up Smighties, and Reality Clash, described as “Pokémon GO meets Call of Duty”.

Card packs for Doctor Who: Worlds Apart cost $4.99, and the free game will release on mobile and PC sometime next year.