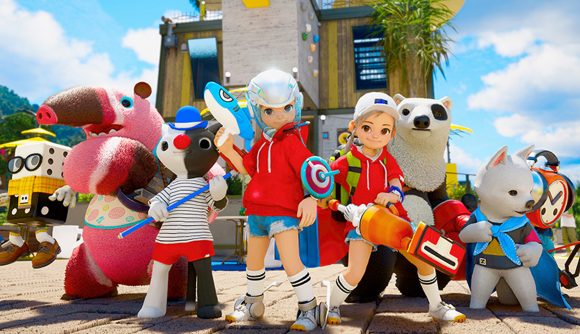 Pokémon-like DokeV made waves at Gamescom this week for its big re-reveal showing it off as being a colourful, zany, and gorgeous open-world MMO. However, in a surprising but not unwelcome turn of events, developer Pearl Abyss has since revealed that DokeV has undergone a genre change and is no longer an MMO.

DokeV was originally revealed all the way back in 2019 looking similar to how it is now – complete with that annoying earworm K-pop song – with one major difference: it was announced as a “family-friendly” MMO. Hardly surprising as it’s from the makers of Black Desert Online, but obviously not for everyone.

With the Gamescom re-reveal, Pearl Abyss took to Twitter to announce that DokeV was no longer an MMO and is now an “open-world action-adventure,” with no confirmation of any multiplayer elements at all – despite Google showing that the official website still calls it an MMO, and there being an unofficial DokeV club set up to meet other players.

The developer says that it “decided to move the game in a different direction” away from being an MMO, and so DokeV is now far closer to being a traditional Pokémon game than it was before. Pearl Abyss also re-confirmed that the game would absolutely, definitely be coming to PC – it’s actually the consoles that are in doubt right now.

#DokeV was initially introduced as an MMO, but we decided to move the game in a different direction and it's now a creature-collecting open world action-adventure.

But regardless of genre, we're going for fun, vibrant, and adventurous! 🦙☂️

The biggest question mark is regarding DokeV’s release date. Much like the MMO thing, initial reports this week had it as 2022, but Pearl Abyss reached out to correct VentureBeat on that score – DokeV won’t be out until at least 2023. If that’s disappointing, there are a few Pokémon-like games out on PC already – as well as some fantastic MMOs if that’s more your thing.