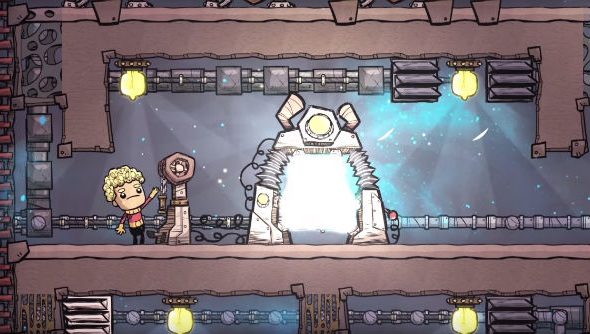 Update 13 Jun, 2016: It’s been confirmed, but we know almost nothing about it thanks to a spectacularly breif trailer. What we do know is that it’s called Oxygen Not Included and it’s due out in late 2016. We’ll let you know when we have more information.

Orignal article: Klei Entertainment, creators of indie hits like Don’t Starve, Mark of the Ninja and my beloved Invisible Inc have announced they’ll be showing a new game during the PC Gamer conference/show thingy tomorrow.

The teaser image shows a character that appears to be in a cracked space helmet, and the art style means that it’s either a Don’t Starve in Space or something completely new.

Of course, maybe the teaser image is a complete red herring and we’ll be getting a photorealistic FPS game. Honestly, if it’s Klei, it’ll be good. The studio are well known and respected for a stack of 2D titles with excellent art, and last year they had big success with the continuing updates to Don’t Starve and the official release of my personal 2015 game of the year Invisible Inc.

We’ll bring you more information as soon as they release it tomorrow, in the meantime, I’m going to cross all my fingers and look closely at the image in the hope of trying to work out more about it.

Tune in to the PC Gaming Show this Monday for something new from us.