Don’t Starve has always been an infernal machine, made out of monster flesh and oddly shaped gears, that’s churned out anecdote after anecdote. That time I jumped into the ominous maw in the ground, only to reappear half-way across the world and surrounded by nightmares. That fight I had with a legion of giant eight-legged creepy crawlies, where only the timely intervention of some noble pigmen saved me from death; pigmen I then killed and ate.

Throwing another player into the mix, a fellow survivor, seems like a natural progression for Klei’s strangely whimsical survival horror game. A second player, just as desperate to survive, in a world with fleeting resources. Don’t Starve and co-op is, or at least could be, a perfect marriage. But is now the time to get hitched to Don’t Starve Together? 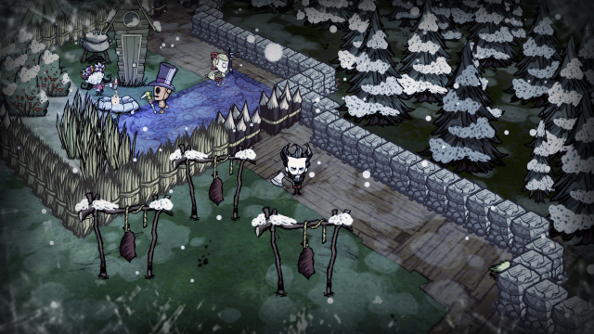 Currently a standalone Early Access title, Don’t Starve Together never strays from the premise of its progenitor. It’s still that challenging survival game, where maintaining sanity is just as important as keeping a full belly, where every evening promises shadow horrors, and where every step introduces some new, unpleasant danger.

The scope of the multiplayer is small. It’s a co-op game, not an MMO, and while friendly fire can be turned on, you won’t find the same type of PvP tension that exists in games like DayZ or the recently released H1Z1. What you get, instead, are more adventures in Don’t Starve, but ones you can share with your chums.

You start in this big open world with nothing in your pockets, not even lint. At first you just try to survive, filling the immediate core needs like food, but then a base can be built, farms can be constructed, and pigmen slaves can be bribed into servitude with dodgy meat. With the Adventure mode yet to appear, it’s all sandbox right now, but it’s a big sandbox. 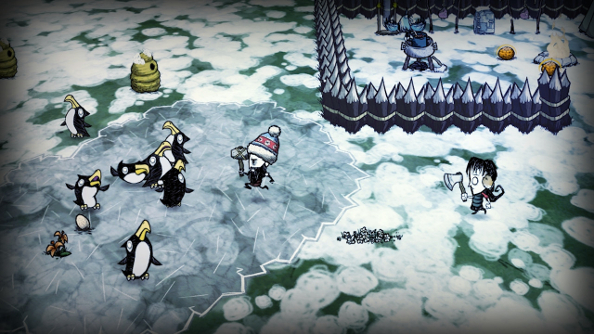 The colourful cast of Burton-esque characters are all available from the get-go, too. In the original game, they needed to be unlocked, but with multiple players in every game, there’s a greater need to have a big range of options from the start. This means you can explore the world as a loopy pyromaniac child, who will just randomly set fire to things, or a gloriously moustachioed strong man, who prances around in a fetching unitard.

Of the modes that are ready, one gives you infinite lives and a starting position right next to your fellow survivors, while the other spawns you all in separate locations and includes the threat of permadeath. The challenge of locating other players in the game world is actually a much greater obstacle than the permadeath, however, which actually turns out to be a boon.

Without permadeath, being reduced to zero health points transforms you into a ghost, which can cause amusement by haunting creatures and objects, but also drives other players mad, lowering their sanity and risking their lives too. A quick trip to a gate is all that’s needed for resurrection, but that comes at a cost as well: a portion of your maximum health. 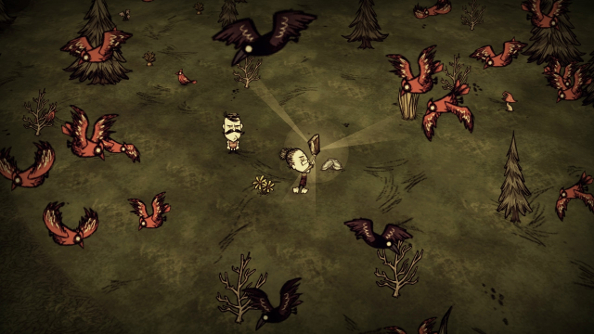 My chum and I find ourselves in a bit of a tight spot. The constant competition for food and a couple of unfortunate nights spent being chased by hounds from the pits of Hell has left us with the lowest possible maximum health. A strong breeze could break us. So we have no choice but to brave the dangers of crafting a special life-giving item that, at such an early point of the game, is a massive undertaking.

Our drive to get the items needed for us to cure our weak constitutions can only be described as suicidal. Again and again we throw ourselves at monsters, falling into a heap of bones over and over. And, newly resurrected, off we go once more, wandering far, getting into yet more battles, inching ever closer to our goal, but knowing that it’s still miles away. Our resolve is whittled away, and each journey becomes mechanical. We are machines fit for one purpose alone: dying.

After hours of work, we’re able to fashion a cure for each of us, but we realise that we’ve only just started our nightmare. Our maximum health is raised only slightly, and we need to repeat the horrors of the previous hours many times more. But if we die even once, we’ll be right back where we started. 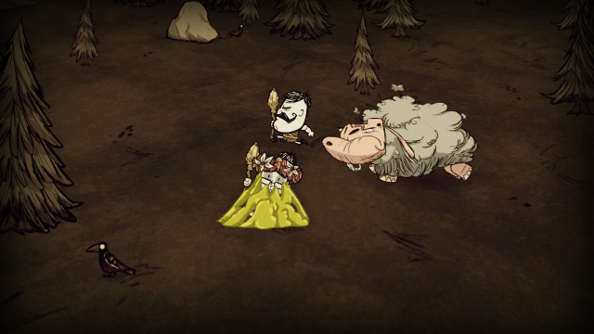 More players can chop down more wood, gather more resources and fight off tougher foes. But they need more food, more healing salves and more equipment. A balance is undoubtedly possible, but it’s not quite there yet. It’s far easier to get into a situation where there’s no glimmer of hope, no possibility of survival, than there is in the core game.

Before a new world is born, the abundance of resources – among other things – can be tweaked, so it’s certainly not impossible to find that balance yourself, but that requires a bit of trial and error, and yet more abandoned worlds.

I must acknowledge, however, that despite my tale of woe and failure, I got plenty out of it. There was a story to tell, and also new experiences stemming from co-operation. As it becomes even harder to survive, teamwork becomes an absolute necessity.

With more players, jobs can be doled out. Someone can forage while the other builds. One of the group can go off, spear in hand, to hunt, knowing that when they return there’s some already cooked grub waiting for them, or maybe a new farm or a lovely tent to alleviate the stress that comes with the night. 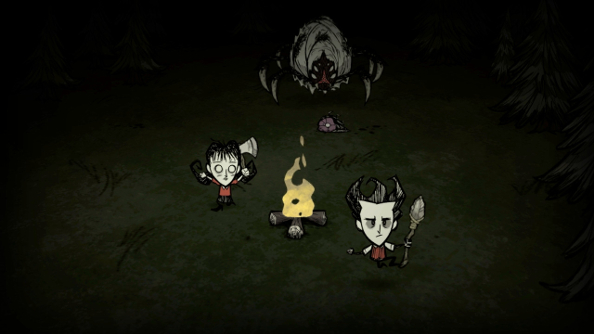 At the moment, aside from the co-op, everything in Don’t Starve Together can be found in the original game, and it doesn’t include content from Reign of Giants, Don’t Starve’s first expansion. While all of that is on the cards, it doesn’t feel like there’s an absence of activities and diversions right now, however.

Even amid all the suffering, the long, cruel winters and the menagerie of hungry, ferocious beasties, Don’t Starve Together remains a hoot, it’s just an exhausting hoot. Having a buddy in tow simply feels like the right way to play Klei’s cartoon horror romp. But, unless you’re eager to pay to be a guinea pig, there are not a huge number of reasons to pick it up during Early Access.

When Don’t Starve Together launches, it will be entirely free for all Don’t Starve players. And if you don’t already have a copy of the original game, you might be better off buying that, enjoying the finished version, and then getting the standalone for free when it too is finished. But with all that said, the Frontier Pack on Steam is 75 percent off to all Don’t Starve owners, which means you’ll get two copies of the Early Access game for £3.75. So jumping in now isn’t exactly going to break the bank.

Wait (unless you find a few quid under the sofa cushions)