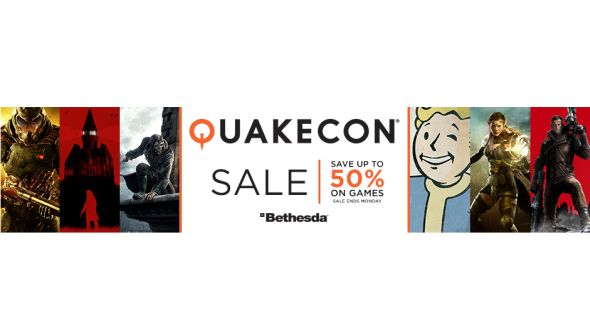 QuakeCon’s just around the corner, with the event itself kicking off tomorrow. That means a few annual events – the introductory stream, sadly lacking in Carmack speech. The tournaments, which promise to be excellent. And, most notably right now, the sale on Bethesda games, which has two of their best ever at 50% off – Doom and Fallout 4.

What’s cheaper? Free, that’s what. Here’s the best games you can play for nothing.

The deal is up on the Humble store, featuring basically everything Bethesda have made at 50% off for the next five days. Here’s some personal picks:

There’s loads of others, from Skyrim’s all-the-everything edition also at 40% off to Wolfenstein’s less-good follow-up The Old Blood, or respected horror The Evil Within. Rage, Doom 3, Fallout 2 – anything you could want from the back catalogue.

Want something a bit off the beaten track? Try Call of Cthulu: Dark Corners of the Earth, which is about the cost of a particularly small pizza. It totally falls off the rails about mid-way through, but the first couple of hours are absolutely extraordinary, or at least that’s what my brain remembers from the decade or so back that I played it.

There should be more news coming out QuakeCon soon – more details, and perhaps gameplay, of Quake Champions, we hope.