Doom has arisen again. It’s tough. It’s bloody. But it’s not too serious for the now-traditional Doom Easter eggs. 2016’s game goes back to the series’ butch, action-oriented roots, albeit with added limb-tearing finishing moves that bring a satisfied grimace to your face not unlike the original Doomguy’s when he’s offloading a chaingun into a Cyberdemon.

Will Doom make the ranks of the best FPS games on PC?

This revamped take on Doom doesn’t take itself too seriously, and unlike its more horror-oriented predecessor, feels like a bombastic celebration of earlier games in the series. As such, there’s a panoply of easter eggs, winking nods, and entire old-school Doom levels tucked away in its metallic Martian corridors and eldritch hell-tunnels.

Without further ado, here are 14 lovely Doom Easter eggs, references and silly secrets for you to find. Happy hunting. 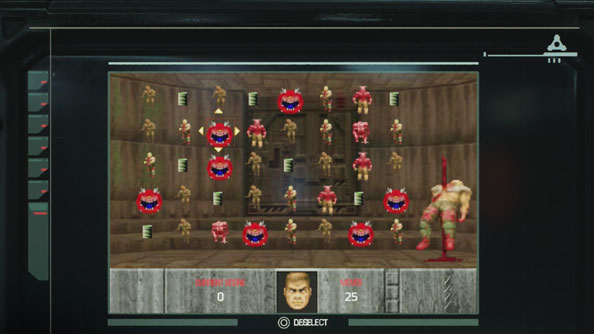 Doom’s gameplay is a relentless pendulum swinging between large-scale firefights and relatively peaceful moments where you can kick back, hunt for secrets, and, errr, play a Candy Crush-like minigame (or Bejeweled, for all ye old-timey gamers out there).

When you’re on the Lazarus Labs level, go to Olivia Pierce’s office (containing the weird meaty creature-things suspended in giant orange test tubes). To the left of the entrance, you’ll see a computer terminal with the classic ‘impaled man’ sprite. Just activate the computer and you’ll play Demon Destruction, a Match-3 game using enemies from the original Doom. 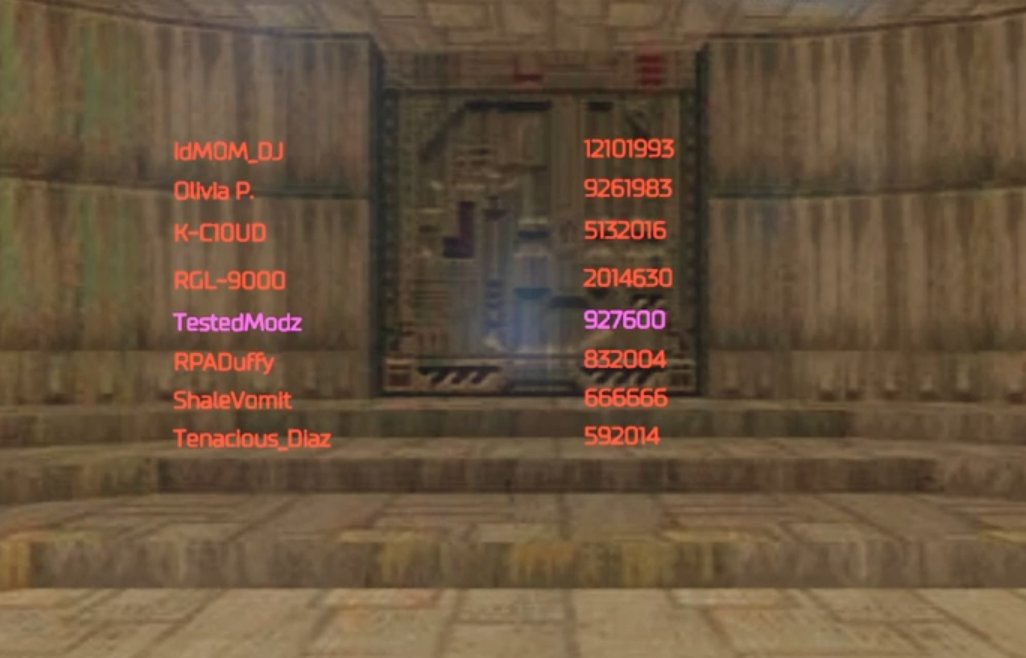 Like every good retro-flavoured game, a session on Demon Destruction ends with a leaderboard that’s initially filled with ‘filler’ high scores. All the names and scores on this board actually refer to key names and dates surrounding the Doom games: 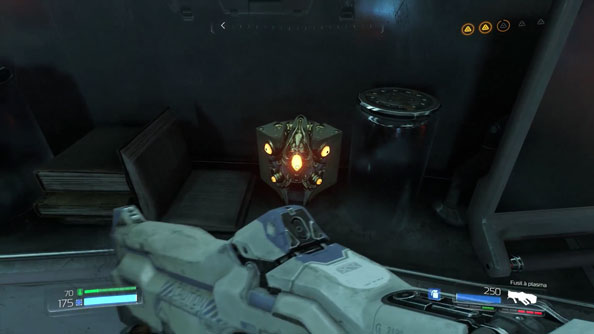 In the same room as Demon Destruction, you’ll find that Ms. Pierce has also been dabbling with the Soul Cube from Doom 3, the devastating weapon that sucks the life from enemies and transfers them over to you by some strange satano-scientific means.

Unfortunately, the cube is a bit of a tease, as you can’t pick it up or use it. 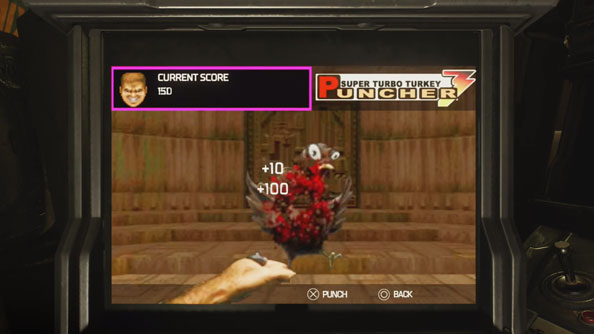 Even though Doom 3 was dark and downbeat by comparison, it also had its fair share of sillies, the most famous of which was probably the great Super Turbo Turkey Puncher arcade game. Well, the latest iteration of the poultry-pounding game returns, and… it’s pretty much exactly the same.

There are several of these arcade cabinets throughout the game, one of which is on the Advanced Research Complex level, tucked away behind some crates in a storage room. It’s not as deep as Demon Destruction, but will give you a solid minute’s worth of chuckles. 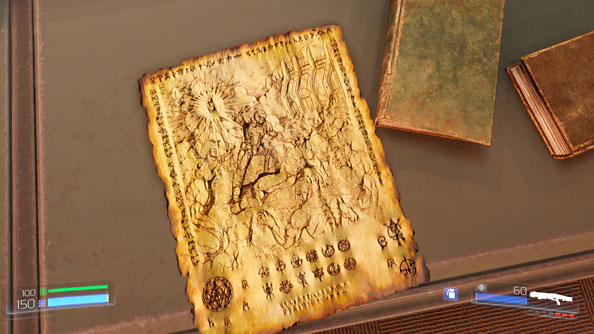 This ancient-looking piece of paper seems to suggest that Doomguy’s war on the demons was prophesied for millennia. Alternatively, it’s just a nice little nod to Don Ivan Punchatz’ cover art for the original game. It has hints of Evil Dead: Army of Darkness too, where we see a page in the Necromonicon that depicts Ash falling from the sky to become the ‘Hero from the Sky’ who’ll save the people from the Deadite armies.

An erstwhile adventurer with an injured knee 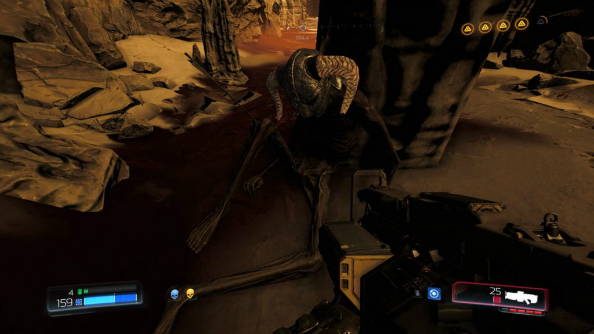 Yes, it may be a bit 2011, but it seems that Skyrim’s infamous ‘arrow to the knee’ meme lives on in Doom. For those of you who missed this great moment in meme history, one of the most famous lines of stock dialogue in Skyrim sees a guard reminisce about having once been an adventurer, before he took – yep. And this became a meme phenomenon because, well, memes.

Maybe the joke here is that the once-great meme is now long dead, doomed to burn in the fires of hell for all eternity, never to resurface. Or maybe I’m reading too much into it… 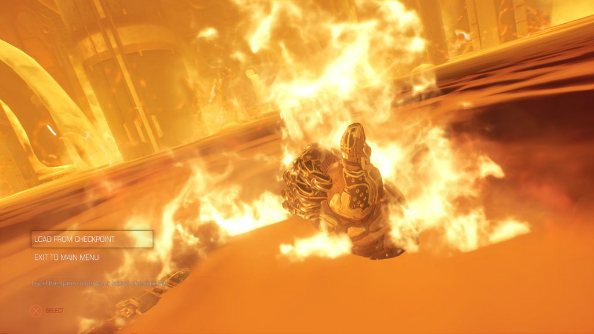 Falling into a pit of magma or molten metal is never fun, especially if it’s one you can’t get out of and it’s just a matter of time until you die an excruciating death. But id Software did their best to soften the blow, as when Doomguy sinks into the fiery liquid for his death animation, he manages to give one last thumbs-up before going under.

And who else is cool and 90s enough to also do such a gesture? Why, none other than Arnie in Terminator 2: Judgement Day. 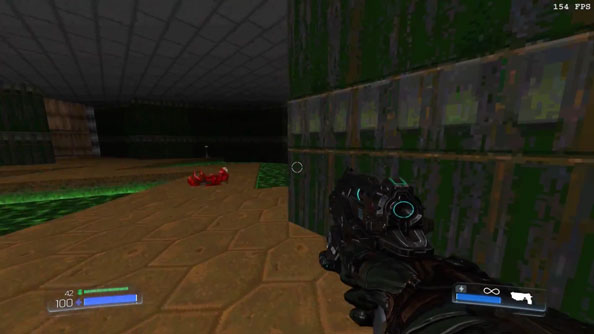 Some of the worst kept secrets and greatest easter eggs in Doom are the classic maps hidden in each of the game’s levels. Find them, and you get step back in time to levels from Doom 1 and 2, complete with pixellated textures, old-school pickups, and barrels filled with green explosive goo. In a surreal twist, Doomguy and the enemies in these areas are from the 2016 version of Doom.

Each classic Doom level is unlocked in the same way: find a large yellow lever, pull it to hear a synthy 90s-sounding chime, and nearby a door or wall will open that leads you back to some of the great levels from Doom’s early days. Those old-school Doom riffs will bring tears of nostalgic joy to your eyes.

You ARE the original Doomguy 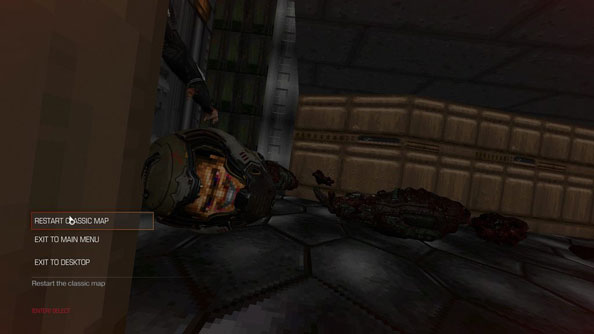 When you’re rampaging around one of the classic levels in Doom, should you complacently shoot one of the explosive barrels thinking that a silly sprite can’t possibly kill the glossy 2016 version of Doomguy, you’ll die.Take it from someone who’s tried it…

But even in death Doom finds some humour, and as your giblets bounce around in front of you and your own head rolls into view (making you wonder from whose perspective you’re actually playing the game), you’ll see the familiar grinning face of the original Doomguy inside the helmet.

Fallout 4 and Doom in the same universe? 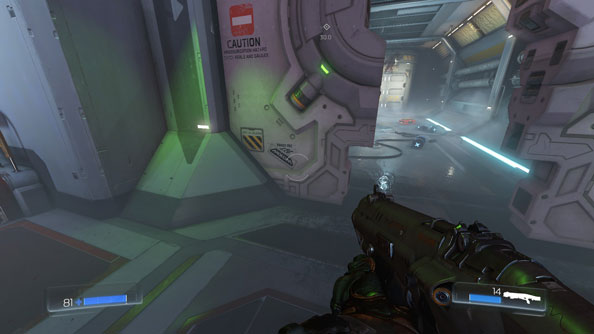 Ever eager to squeeze their biggest IPs into this easter egg-stravaganza, Bethesda had the heavier, vault-like doors in the Mars base made by none other than Vault-tec, the company behind the notoriously dodgy underground vaults in the Fallout universe.

Look closely at the vault doors in Doom, and you’ll see that hidden under the ‘Mixom’ logo is the Vault-tec sign. The big question now is, is this just an irreverent easter egg, or proof that Doom and Fallout exist in the same universe? Let’s get those tinfoil hats on and start speculating… 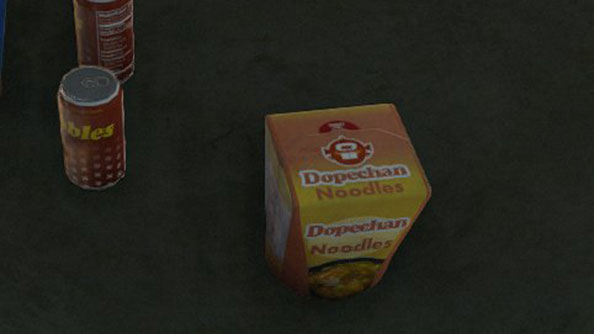 The history of Dopefish is a strange one. The relatively unmemorable enemy from the id’s Commander Keen series has gone on to make more appearances as an easter egg than it has as an actual character in games.

Doom continues this strange old tradition, as images of Dopefish have appeared both on the sides of lockers, and on a box of takeaway noodles. Like so many inexplicably popular means and in-jokes in videogames, Dopefish is truly eternal.

Happy birthday to… someone 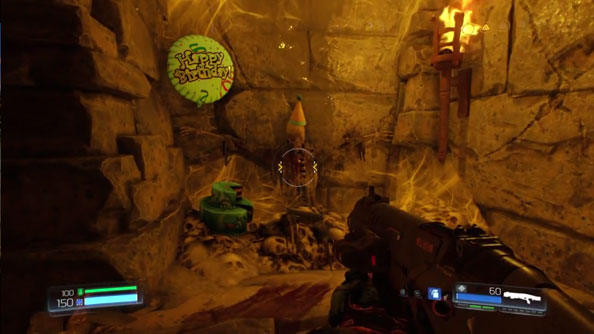 It seems that even in hell, they have enough sense of tradition to celebrate people’s’ birthdays, as seen here with this sweet little scene of a birthday balloon, cake and skelly with its arms splayed out.

Is this a reference to the fact that it was Doom’s birthday on Friday 13th? Or is this perhaps the skeleton of a young Jason Voorhees, who also had the same unfortunate birthday? If you choose to be a party pooper and shoot the balloon, you’ll hear a damning ‘booooo’ from what sounds like a group of 7-year-olds – and as well all know, a group of 7-year-olds is inherently pretty hellish.

Head on a stick 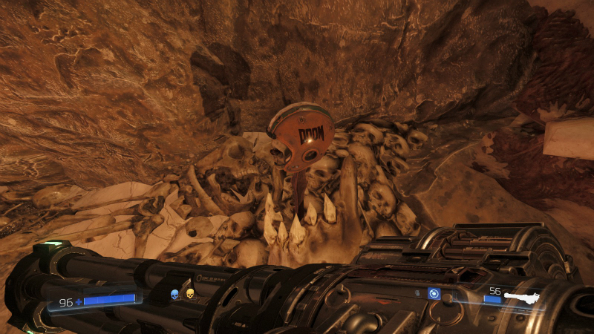 It had to be in there somewhere. The legendary head of John Romero on a stick that turned out to be running the entire show in Doom 2 is one of the most macabre and famous images from the series, and it kind of makes a comeback here.

Ok, so we don’t know for certain that this skull-on-a-stick in a Doom-branded helmet is definitely Romero because, well, we don’t know Romero’s exact skull measurements. But the fact that it’s surrounded by what appears to be a monstrous jawbone suggests these could be the remains of Doom 2’s final boss, the Icon of Sin, inside of which was Romero’s head. See what I’m getting at? 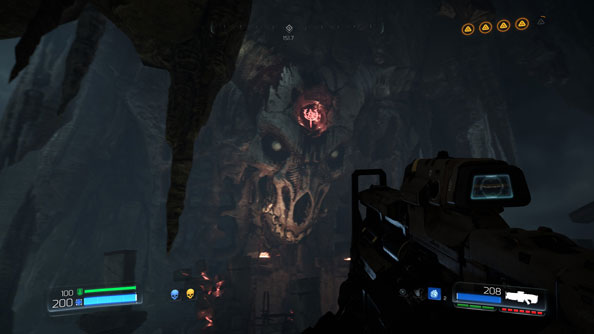 An even more blatant nod to Doom 2’s big baddie comes late in the game, when you’re wandering around the murky Necropolis, you’ll find the Icon of Sin in its full exposed-brain glory right there on the wall!

Shooting into its weak spot will cause it to emit that sound it made when summoning creatures in Doom 2, as well as that famous demonic soundbite, where it says “To win the game, you must kill me, John Romero” in a distorted and reversed voice. Shooting it also causes it to fire to unleash a skull cube, inside which you’ll find a Doomguy collectible.