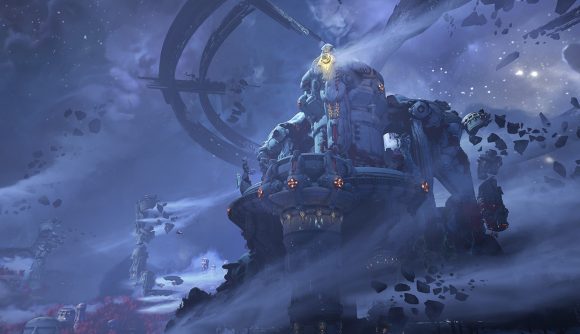 If you missed the news in the leadup to the launch of Doom Eternal, the game’s getting at least two major pieces of single-player DLC. Developer id Software has been pretty quiet about what to expect from the additional content so far, but a new set of teaser screenshots have offered a look at the new locations you’ll be visiting.

The first screen appears to be Urdak – Doom’s vision of Heaven – though it’s now in ruins. The other appears to be an industrial ocean platform, set in a stormy sea with a load of cargo ships getting tossed around. Both these locations will be part of the first piece of story DLC. Doom Eternal’s Year One pass – priced at $29.99 / £24.99 / €29.99 – includes two separate campaign add-ons due to launch this year.

Here’s the store page summary of what to expect: “Your victory over Hell’s armies pulled humanity back from the edge of extinction, but it came at a cost. An imbalance of power in the heavens requires the true ruler of this universe to rise and set things right. Wage war across never-before-seen realms of the Doom Universe, fight against new demons, and wield new abilities in your never-ending battle against the forces of evil.”

Check out the screens in closer detail below.

We do know that thanks to the Doom Eternal soundtrack controversy, composer Mick Gordon will not return to provide any new tunes for the DLC. Both Doom soundtracks are already legendary among FPS games, and it’s a shame we won’t be hearing more of it – but hopefully, the new content will have plenty of other merits.