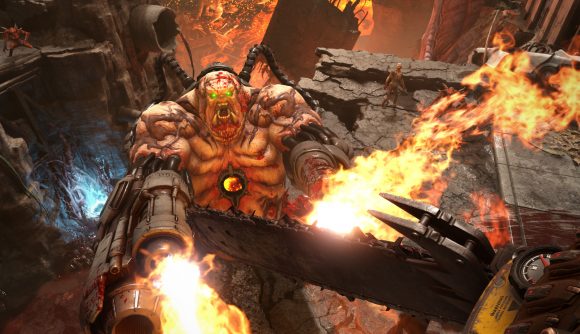 Matt Heafy, frontman and guitarist for the band Trivium, put his spin on one of Doom‘s most well-known musical themes for QuakeCon this weekend. A recording of Heafy’s rendition played in the background while he took on Doom Eternal‘s Nightmare Mode on stream.

In a Twitter clip, viewable below, we get 90 seconds of the cover as Matt tries, and mostly succeeds, at holding his own against the demon horde. The tune is the classic E1M1, from the very first installment of the FPS game, though a tad heavier this go around. Heafy’s version is recorded using an eight string guitar, and while it starts recognizable, it quickly becomes its own beast. The familiar E1M1 refrain gives way to some extreme low-end riffing that flows into an extended harmony section that’s reminiscent of Trivium’s own dual-guitar style.

During his time in the QuakeCon at home stream, Matt spoke about the cover, giving two full play-throughs on guitar, a brief lesson and talking about Doom’s influence on him personally. “I grew up with video games, grew up with music. My biggest criticism was always, when I heard things other than metal being used for video games,” Heafy explained. “Pop gets enough love, EDM gets enough love, rap gets enough love – give metal some love. It’s so great to see a game that, I felt, there was always a place for a metalhead, for a metal musician.”

The singer-guitarist is no stranger to the world of streaming, having built his own audience on Twitch over the last several years. He practices guitar, works on covers, and plays games twice a day most weekdays at his channel here.

You can watch the clip of his cover here:

You can watch his full, hour-long segment starting at 09:30 here:

Doom Eternal’s first DLC, The Ancient Gods, Part One, was announced during QuakeCon. More is expected at GamesCom at the end of the month – good thing we have a list of the best horror games to tide you over until then.