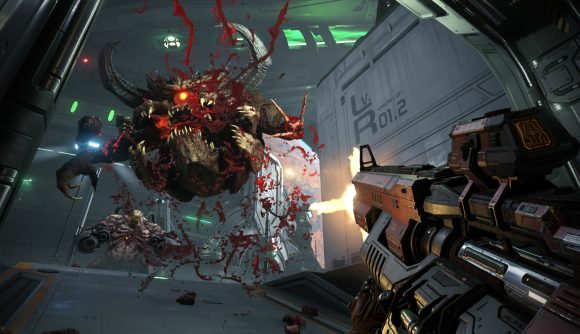 It wouldn’t be Doom without a healthy dose of messy demon dissection, and Doom Eternal promises to give us more of exactly that. The Doom Eternal gameplay reveal at QuakeCon on Friday showcased several new glory kill moves, as well as more step-wise demon destruction on some of the larger enemies, like the flamethrower-wielding mancubus.

Rather than simply running in for glory kills, players can target specific body parts or weapons on some of Doom Eternal’s enemies to help manage the combat environment. Id creative director Hugo Martin says it’s part of what they call “combat chess.”

“In the case of the arachnotron for example, his turret gun on the back is his primary attack and can be very formidable,” Martin said, referring to the smaller spider-demon enemy seen in the gameplay video. “You can blow that off and disable one of his attacks.”

“Do you have to do that? No, but it will probably make your life easier,” he continued. “Do you have to shoot the Pinky in the butt to kill him? No. But you’ll save a ton of ammo if you do that because he’s so vulnerable from behind.”

Martin said id has tried to avoid forcing players to use specific tactics or set sequences of attacks when fighting tougher enemies, and instead want to give players the option to exploit their foes’ weaknesses in combat.

Of course, Doom Eternal will still have the one-and-done glory kills that debuted with its predecessor, and as the video shows, there are plenty of new, gory animations featuring the Doomslayer’s retractable arm blade and Meathook grapple.

The Doom Eternal release date hasn’t been announced just yet, but we expect to see it sometime next year.