My favourite moment in Doom 2016 is when Samuel Hayden, the hubristic scientist and head of the UAC’s Mars base, walks you through disabling his proudest creation, the Argent Tower. Nerd that he is, Hayden would prefer that you carefully unscrew the tower’s energy filters, but he can’t even finish giving his instructions before Doomguy kicks the crap out of them.

I love this. This was when I knew that id Software had found a way to update the gleefully anarchic spirit of Doom for 2016. As I mention in my Doom Eternal review, the original Doom belongs to another, simpler era of videogames. Its premise sought to achieve nothing but give you an excuse to blow up some demons with some cool sci-fi guns. The entire game had barely a page of narrative information, outlined in paragraphs at the end of each episode. It did the absolute minimum it needed to justify its existence and give you a job to do, then it got out of the way.

There’s nothing wrong with that. Indeed games like Ion Fury, Strafe, and Hellbound prove there’s still an audience for simple old-school shooters in the mould of Doom, Quake, or Duke Nukem 3D. But they’re indie. No modern triple-A shooter with a single-player campaign could have such minimal story elements (which raises questions about whether a triple-A game can be ‘minimalist’ in any department or whether its budget necessarily brings expectations of abundance in story, gameplay, etc, but I digress).

Despite the IP beginning life over 20 years ago, Doom 2016 feels not only contemporary but satirical

Doom 2016 needed to expand on the series’ simple premise, and the transformation of the Union Aerospace Corporation was key in doing so. The focus of its research went from teleportation to solving Earth’s energy crisis, while the corp itself went from the trope of Scientists Tinkering With Forces Beyond Their Control to that trope plus a truly disturbing Hell cult that actually wants the demons to get their way. Throw in a holographic spokesperson whose own deranged zealotry becomes increasingly clear, yet remains oddly compatible with the soulless motivational corporate platitudes he spouts, and an IP that began life over 20 years before feels not only contemporary but satirical. 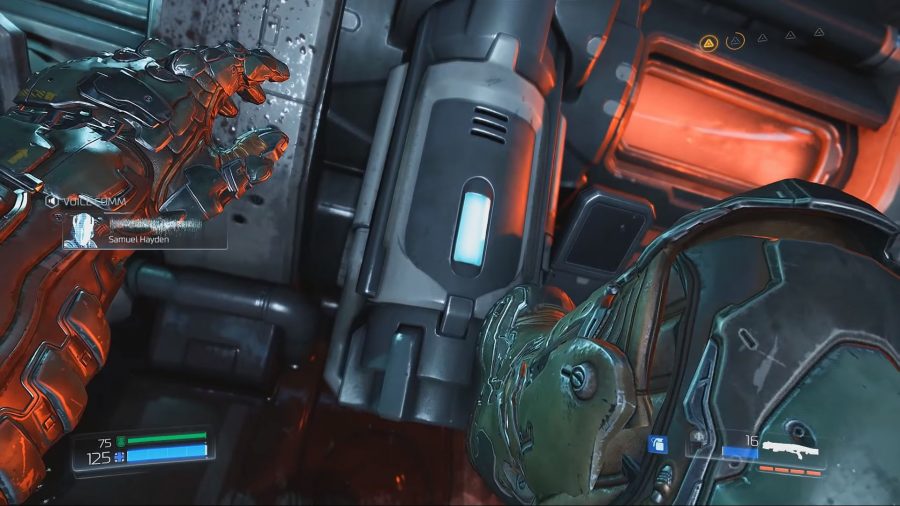 I worried that, in its evident ambition to build a universe and generally go bigger with Doom Eternal, id would lose the focus it found in 2016 and finally stretch the original premise too thin. But it has, once again, found a reason that we all need Doomguy. It leans into his destruction of those energy filters in Doom 2016, but Doom Eternal takes it further.

Where the original Doom was a simple game about killing demons, Eternal is a game about simplicity, and its appeal. It’s not just a power fantasy, but a fantasy that power – specifically in its basest, most physical sense – can be a solution to every problem. It never occurs to Doomguy to do anything other than punch or shoot to fix things. As an audiolog from a resistance scientist says, he “represents humankind’s rage, our will to persevere, to overcome that which would threaten our survival. He is an uncompromising, relentless being of violence, and shows none of the hesitation shared by politicians and other leaders in our time of judgement.”

For more shootybangs: see the best shooters on PC

It’s a little on the nose, sure, but it’s a bold attempt to make Doomguy’s simplicity, conceived in an era when it didn’t need justifying, relevant to today. Fellow ’90s meathead Duke Nukem looks tragically obsolete by contrast (although, sadly and to the dismay of developer Machine Games, we live in an era where people are willing to march under Nazi flags, so Wolfenstein’s B.J. Blazkowicz is more relevant than he ought to be, albeit for much more specific reasons than Doomguy’s reinvention).

You might point out that a demonic invasion is not climate change, and that even the most milquetoast of today’s politicians would agree that the only solution to such a problem that merits the name is to bloody kill them all. But that’s satire: making a point by taking real problems to absurd extremes. And Eternal follows through, by showing that, yes, there are those willing to advocate compromising with the apocalypse. 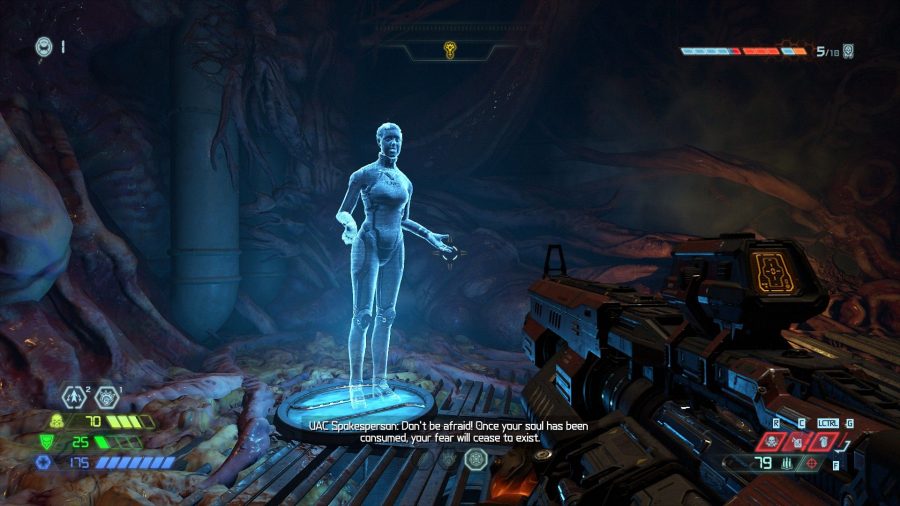 With the invasion of Earth underway, the UAC drops all pretence and introduces a new spokesperson to make the request – Kafkaesque in its absurdity and in the impenetrable self-assurance of its delivery – that humanity actually welcome the invaders and submit to an eternity of torture.

Samuel Hayden, meanwhile, continues to argue that “this could’ve been avoided with different leadership”. Despite the examples of Argent D’Nur and of his own protégé Olivia Pierce, who were each betrayed or seduced by exposure to Hell’s resources, he still thinks he could’ve controlled them, which puts a delicious twist of irony on his accusing the Khan Maykr of hubris.

Even King Novik, leader of Doomguy’s former brothers-in-arms the Night Sentinels, warns him against continuing the fight, offering various feeble reasons: the Hell Priests driving the invasion were once Sentinels, humans are “no longer your people to save,” and – worst of all – if you continue you might make Heaven mad. When I first watched this scene at the Doom Eternal preview event, without a full understanding of who Novik was, I thought it irritatingly out-of-character to see Doomguy kneel to anyone. Now, I imagine I see a hint of contempt in his body language as he gets to his feet and turns his back, disgusted at the cowardice of his former king. 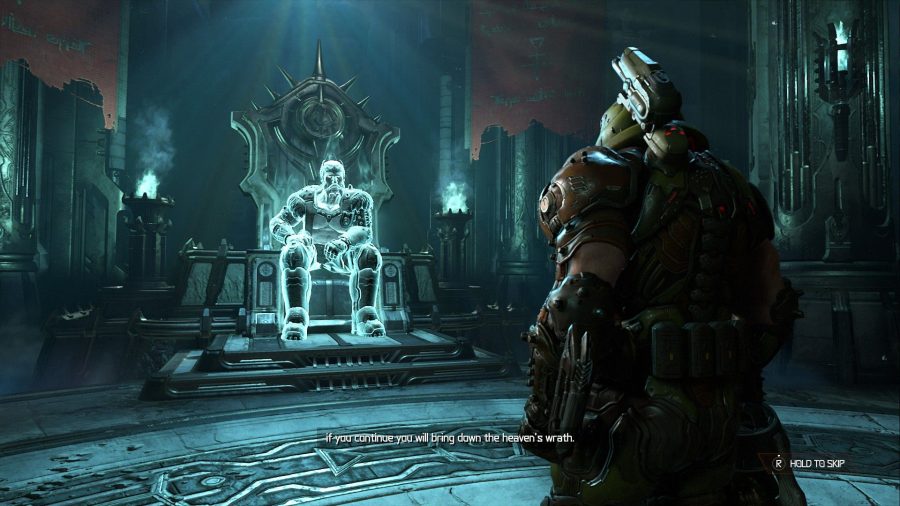 Against these apologists, deluded would-be saviours, and appeasers, stands the reassuring simplicity of Doomguy. He doesn’t speak because his motives require no explanation. What is happening to Earth is unconscionable and must be stopped. That the Maykrs depend on Argent energy to survive is no justification at all for sacrificing billions of innocent lives in their despicable pact with Hell, and for enabling their invasion the Khan Maykr, too, must be stopped.

And that’s all that needs to be said. Doomguy doesn’t care about the consequences because whatever they are he can always just shoot them as well. This is a man who loads himself into a cannon and fires himself headfirst through a wall just to get from A to B. The problems we face today, while serious, are not as serious, nor as simple, as a global demonic invasion. But it sure would be nice if we could just fucking punch them too.