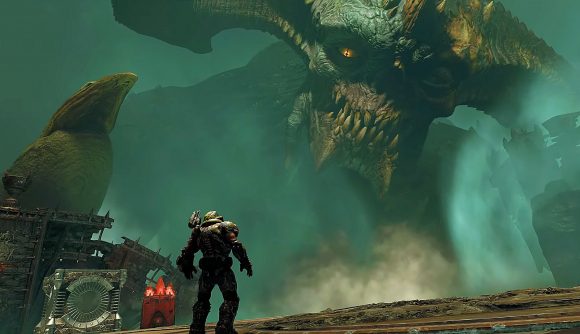 While Doom has been around for as long as the dawn of the dot com, we typically do our ripping and tearing as Mr. Doom Guy himself. More recently, though, Doom Eternal‘s director, Hugo Martin, has revealed that he’s put “a lot of thought” into bringing a female slayer into the mix, evening going as far as to share what his design goals for such a character would be (thanks, VGC).

“I’ve thought about it,” Martin shares when asked about the possibility of a female slayer on a recent stream. “I think if we did it, I’d want it to be lethal. I think it’s interesting how it would impact the Glory Kills and the weapons that she would have. The fighting style [would] certainly [be] all aggression, absolutely, but a different type of aggression. I would really strive to have it impact the gameplay in a way that was meaningful. I’ve definitely put a lot of thought into that, actually!”

Martin goes on to think aloud about what a female slayer would mean compared to The Slayer and how it would be different. It’s clear, then, that Martin would shoot for something different to what’s on offer, rather than offer a reskin.

He adds: “Tonally when it comes to designing the action, you think about, ‘if The Slayer is a Ferrari, then what would a female Slayer be? What would a Medieval Slayer be?’ How would that affect things, and what sort of analogies would you draw from that to allow it to influence the experience? It definitely would be cool.”

Meanwhile, in Doom Eternal land, we’ve got part one of the Ancient Gods DLC, though we’re still waiting on when we’ll get the second part. Executive producer Marty Stratton told us in a previous interview that they’re both parts of the Year One Pass and that we could expect it within a year of the original game’s launch, which was last March.

Going by that logic, we could hear something next month. Given the state of the world with the pandemic, though, it may be wise to sit tight as delays can happen.

If you’re looking for FPS games in the meantime, though, you know where to click.