If I stop moving, I’m going to die. That’s a pretty solid rule when it comes to Doom in general, but I’m feeling it particularly keenly right now. As I sprint around the caverns of a hellish cathedral on the surface of Mars, my weapons running critically low on ammunition, I know there’s a pretty jacked demon right behind me that would like nothing more than to batter me to a pulp.

I make a mad dash up a flight of stairs, and find an imp lurching towards me. I reach for my chainsaw and use the last of my fuel to cleave it in half, its face contorting in an uncomfortable mixture of pain and surprise as a cloud of viscera, and more importantly ammo, erupts from its body.

The odds now more in my favour, I wheel round and face my pursuer. With actual rounds in my gun now, I’m feeling a little more confident. I switch on my assault rifle’s mod, turning its spray of bullets into a glowing stream of energy. The demon stops in its tracks, barely able to roar in pain before exploding in a shower of gore. There’s little time to celebrate though, as more monsters appear to take its place, and I’m forced to begin my deadly dance over again.

While Doom Eternal initially seems to offer the same chaotic, cathartic demon-slaying action as its 2016 predecessor, it becomes clear that there’s something more cerebral here too. While the Doom Slayer is still an imposing figure, able to sow fear into the hearts of men and demons alike in the right situation, it doesn’t take long before the hellspawn I face in the first arena knock me down a peg or two.

Actually, that’s not quite accurate. In my arrogance, I am soundly thrashed by the horde in front of me. Backed up by a swarm of imps as well as a host of demons new to Eternal, the Mancubus dwelling at the far side of the arena seems to take perverse pleasure in dispatching me several times over. Eventually, however, Doom Eternal’s new expression of what you need to do to survive starts to dawn on me.

Health, ammunition, and armour can all still be found around each level, but your greatest resource when it comes to keeping yourself alive remains the demons themselves. Glory and chainsaw kills will unleash fountains of HP and ammo respectively, while a new shoulder-mounted flamethrower lets you douse your enemies in flames before gibbing them to replenish your amour. In Doom 2016, these systems felt like a means to prevent you from pinning all your hopes solely on your gun, but in Eternal, your reliance on them has been dialed all the way up, and your survival now depends on your mastery of all of the tools at your disposal. 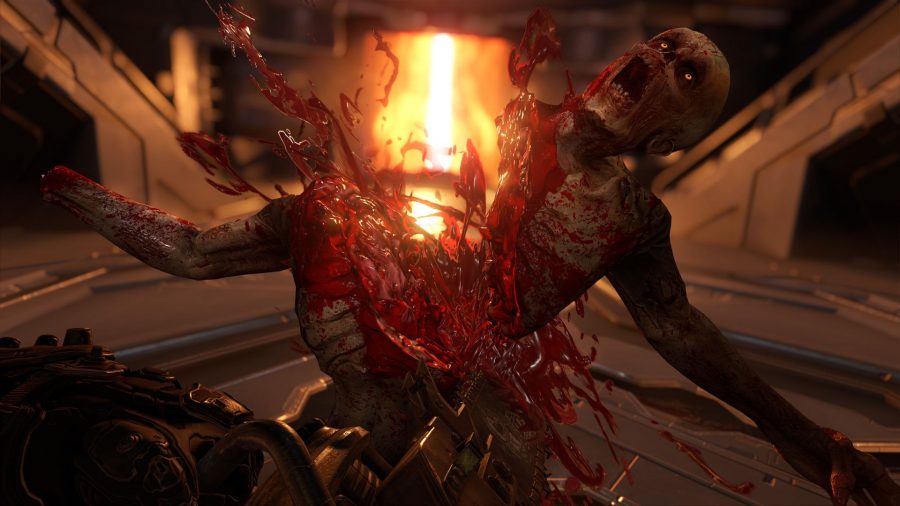 Doom Eternal is no mindless shooter, but a bloody, violent puzzle box

The result is that demons aren’t just obstacles to be dispatched, but are part of a system in which you need to be constantly aware of what you might need next, weighing up each split-second encounter in terms of what it has to offer you. A Cacodemon might offer a massive pool of ammo, but you’ll use up most of your chainsaw fuel splitting it in two, while the health it offers from a glory kill is free. It might be satisfying to blast apart a horde of imps, but dousing them all with your flamethrower is a sure-fire way to fill up your armour. It’s a lot of plates to spin, but it doesn’t take long before you’re weaving all of these ideas together, seeing through the carnage to become the calculating killing machine that Doomguy has always been.

And when it comes to killing, you’re better equipped than ever before. Developer id Software’s unparalleled ability to bring a weapon screaming to life in your hands is on show here, of course, but pulling the trigger is just as important as mastery of the space around you. 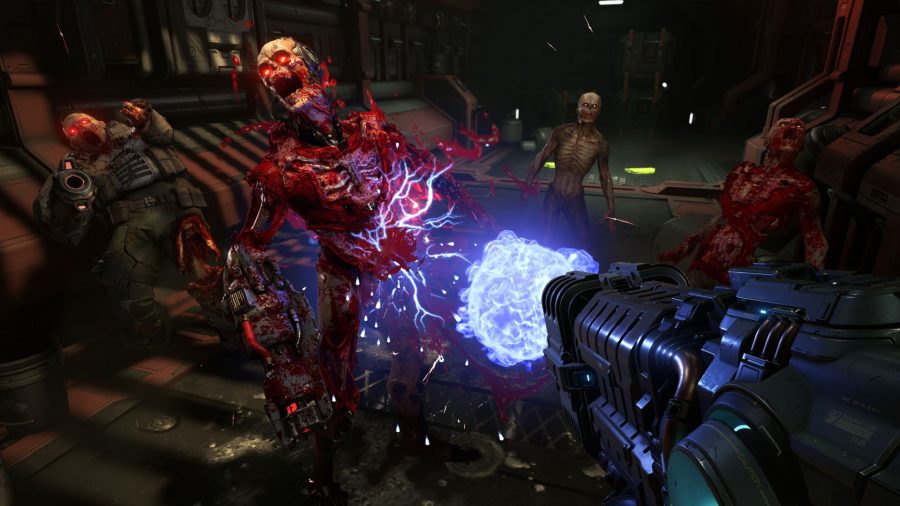 A new dash ability lets you close the gap on enemies, duck out of tricky situations, or find a new vantage spot on the fly. New weapon mods let you grapple across aching chasms with the super shotgun or frag enemies from around corners with the rocket launcher. Destructible demons mean that well-aimed shots will see certain enemies literally fall apart under your onslaught, weapons and armour sloughing off with a satisfying clink as you cripple their vital components.

If it all gets too hectic, the risk/reward nature of the new extra life system means that the action need never stop. Floating helmets scattered around Doom Eternal’s sprawling levels will add to your tally of lives. Some of these are easy to access, but others require feats of timing or acrobatics to get hold of – in my quest for respawns, I launched myself out over a sheer drop before dashing backwards to safety, and timed a jump to perfection while herding a group of monsters behind me. Once you know you have a couple of second chances in your pocket, however, the Doom Slayer feels even more powerful than before. It’s a liberating system, letting you deliberately put yourself in unwinnable situations, only to come roaring back to life a moment later. 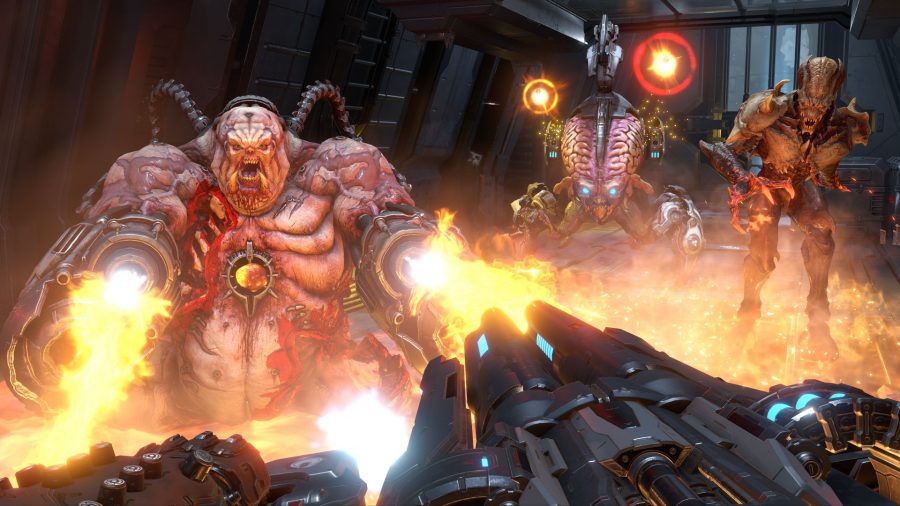 Eventually, as the last demons fall and the red mist fades, I have to remember to breathe again. Doom Eternal is no mindless shooter, but a desperate scramble for survival played out at breakneck speed, a bloody, violent puzzle box where failure might only be one wrong move away, but success is transcendent, calculated carnage.