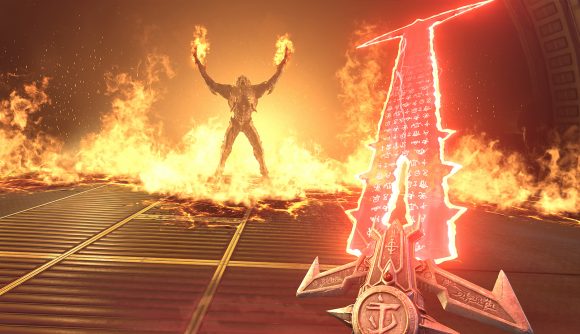 If you’ve played any of the recent incarnations of Doom or Wolfenstein, then you know Mick Gordon: he’s the man behind those games’ driving, industrial soundtracks, which in every case do a lot of work in establishing their blood-drenched tone. Now he’s working on a new videogame soundtrack, and he’s put out a call for voices to join his infernal choir.

Gordon posted a quick video to YouTube yesterday, and in it he says he’s looking to hire a choir of ‘heavy metal screamers.’

Gordon says he doesn’t think this has ever been attempted, and it would be a departure for him, too. Most of his work to date has been instrumental, and conducting a choir is a bit different than layering crunchy, bassy guitar tracks.

To assemble this screamer choir, Gordon has put out an open call for applications. If you’ve got the shredded vocal chords to pull off a decent Cookie Monster, you can apply at Gordon’s website. The only stipulations are that you’re over the age of 18 and can arrange for transportation to a recording session in Austin, Texas in the first week of March.


A couple important points: First, as long as you’re over 18, your age doesn’t matter. Second, Gordon says he’s looking for screamers of all genders. And third, you’ll be compensated for your contribution and be listed in the credits if you’re hired.

Gordon doesn’t disclose which game the heavy metal choir project is going to be used for, so that’s an open question. It’s perhaps possible it’s for the soundtrack to Doom Eternal, which is due out sometime this year. A choir of screaming heavy metal voices would certainly fit in the ‘hell on earth’ motif we’ve gotten a peek at, and we don’t know when the Doom Eternal release date is yet. Gordon is credited for the music in Doom Eternal, although the specifics of his involvement aren’t public knowledge at this point in time either. Also worth noting: the URL on his website for the application to the choir ends in ‘666,’ which is a number that comes up a lot with Doom.

But it’s just as likely that this is meant for some unannounced project, and that’s fine – Gordon’s soundtracks are among my favorites in videogames, and if he’s doing something new, I’ll be keen to play whatever it is.