Gaming’s obsession with the devil’s domain goes back decades. Burning pits, endless torture, and towering structures of gore and primordial ooze are all par for the course whenever a videogame hero visits hell’s chthonic recesses. Doom Eternal, Hades, and BPM: Bullets Per Minute all transported us to their own interpretations of hell in 2020. But while the underworld’s aesthetic is already pretty clearly defined in games, capturing its harshness and brutality through music presents a whole other suite of challenges. Composer Mick Gordon learned this back in 2014, when he was tasked with re-envisioning hell’s soundscape for Bethesda’s Doom reboot.

“The thing that I found really fascinating with Doom was this idea of why [the UAC] were going to hell,” Gordon explains. “It was this idea that there was this Argent energy source that you could find there. Somehow, they had opened up a portal to hell and went ‘hey, there’s all this energy everywhere and maybe we can harness it.’” The technology that results from this effort in Doom 2016 pays homage to the infernal-industrial aesthetic that’s distinguished Doom’s vision of hell ever since its launch in 1993. And so in music: it’s that industrial edge that inspired Gordon to stay respectful of the sound that had come before, while experimenting with weightier, electronic tones.

“What if, when I was playing my synthesisers, the electricity running through them was dead, evil humans? The souls of the most despicable human beings on Earth were being used to create the waveforms that I’m making music with,” Gordon posits. “That’s why I set up some really crazy pedal chains and sent all sorts of things through them. I would try to find the purest sounds that I could, and then send them through various bits and pieces to corrupt the pureness of it. That, to me, was representing what this Argent energy would do to things … that and recording chainsaws, screams, and all the stock standard sort of hellish stuff.”

Id Software initially mandated a strict ‘no guitars’ policy for Doom 2016’s score, but Gordon felt strongly that synthesisers alone weren’t enough to capture the series’ hellish vibe. Guitars have been intrinsic to Doom dating all the way back to Robert Prince’s score for the 1993 original, for which he was inspired by the thrash metal of the ’70s and ’80s. So Gordon challenged id’s decision and embraced the series’ metal roots. 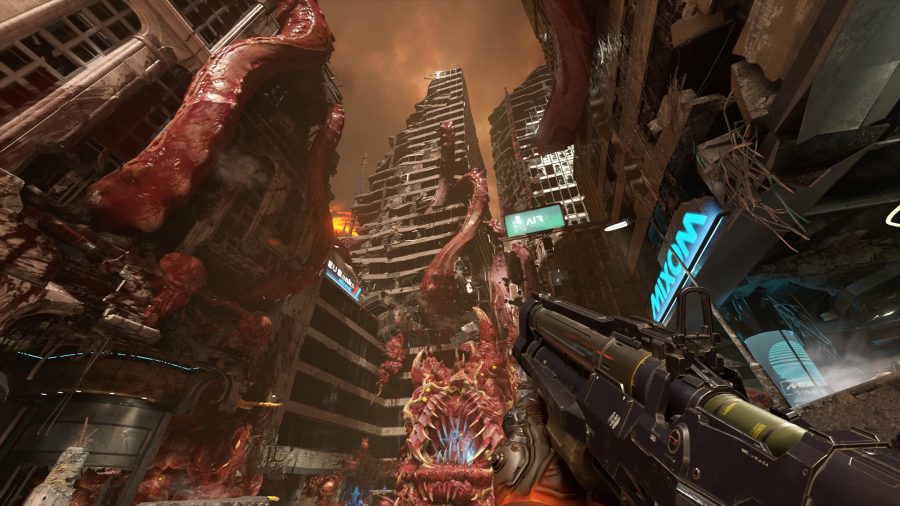 “When I grabbed that [guitar] and started working with that melody, you’re instantly in that Doom universe. Rather than trying to introduce a new thing, you’re able to borrow what’s come before,” says Gordon. He likens it to the Terminator movies, in that having new patterns and melodic iterations in every successful sequel is good, but they would be nothing were it not for that iconic Brad Fiedel theme. “If I’m watching it and it’s not in there, there’s a disconnect for me. So it’s great that you can just borrow credits from the past and pay them off now.”

The Doom 2016 soundtrack received widespread critical acclaim, with many people praising just how brilliantly the tracks matched the game’s aggressive atmosphere and gunplay. Gordon’s work is an intense, energising blend of whirring synths, chugging guitars, and blast beat-laden percussion all designed to convey the idea that the demons should be afraid of you, and not the other way around.

This idea of empowering the player would also translate to Doom Eternal, although the game’s more methodical approach to gunplay – where players cycle through their arsenal to match (and massacre) the enemy in their crosshairs – demanded some significant changes to the soundscape. There’s also the small matter of hell consuming Earth. The score needed to reflect these changes. 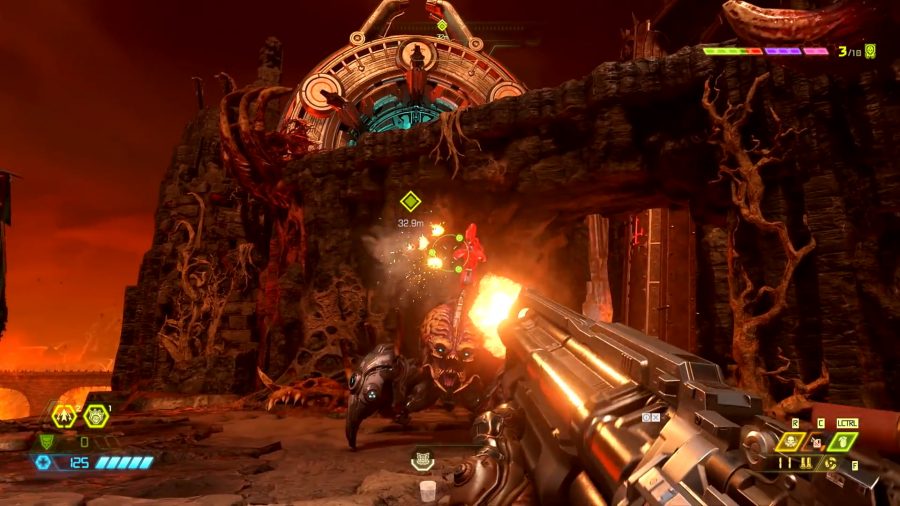 Mick Gordon famously recruited a heavy metal 'choir' for Doom Eternal's soundtrack. Consisting of 30 professional screamers, all would chant an original language devised by game writer Adam Gascoigne for the most intense in-game moments. “People wanted it in Latin,” says Gordon. “I was like, why? That doesn’t make any sense’.”

“[Eternal] had a lot more resource management, a lot more of having to pay attention to things. It was suddenly a lot more challenging; you really had to focus,” says Gordon. “And then the crazy music was just distracting. It was having the opposite effect.” So how did Gordon get players focused on the fresh challenges? “The best way to do that is to give players a level of confidence, and musically trying to represent confidence, to me, comes from really strong grooves. So in Doom 2016, where we had songs like Flesh and Metal, which had insane stuff happening all the time, that’s cool, but it’s not groovy.”

This thinking is what led Doom Eternal’s score to be marginally gentler, aiding players by giving them a strong, consistent groove to back up the rhythms at the core of Eternal’s gunplay. The sequel is a continuation of 2016’s blend of heavy metal and demonic synth, only now, as Gordon puts it, “It’s a lot slower and heavier, with lots of fun grooves. Stuff that lets you slot your gameplay decisions in between the beats.”

Worth it? Read our Doom Eternal review

Getting into the groove is an idea that BPM: Bullets Per Minute composers, Sam Houghton and Joe Collinson, took to a more literal new level. This is because, rather than letting you shoot freely à la Doom, Awe Interactive’s procedural FPS/roguelite must be played on the beat: whether you’re shooting, dodging, or reloading, it has to be timed to BPM’s soundtrack. To make this more intuitive and achievable for the player, the composers wrote all their songs at one speed. 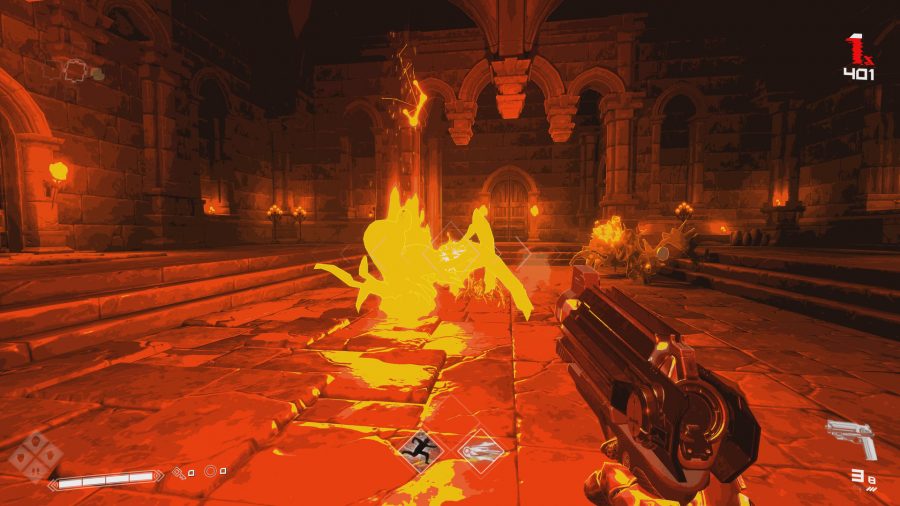 “That’s a massive constraint,” Houghton reveals. “Only being able to write at one speed for more than an hour’s worth of music. And we could never miss a beat. Wherever the ‘pulse’ of 88 beats per minute was, we had to make it extremely clear in the music. You don’t look down the sights when you’re playing the game, you just feel the rhythm.” It’s an endeavour that sounds quite hellish in itself, yet it works to achieve that badass feeling of player empowerment that FPS games strive for in a new way: lulling them into a zen-like state of ‘flow’ through synchronising with the music.

Levels in BPM are simple at first, with more varied and challenging enemy types (which also only move to the beat) entering the fray over time. So how did Collinson and Houghton reflect this growing pressure in the music if they couldn’t vary its pace? Infernal instrumental mainstays like down-tuned guitars and intimidating church organs bore the brunt of the task, sure, but that didn’t stop the duo from subtly intimidating the player using several classic musical techniques, again made popular by heavy metal.

“There’s a specific scale that works well for this kind of stuff,” Collinson says. “It’s called the Phrygian mode. Essentially it would involve going between one note [on the guitar] and then the note that’s a semitone above it. It just sounds super evil.” The composers didn’t have a triple-A budget, but were able to improvise in their home studios. “In some of the tracks we take it down and things get moodier,” Collinson says. “Sometimes I would scrape my guitar strings with a pick and put loads of delay on it. It adds a creepy ambience to everything and sounds a bit like people screaming in the background.” 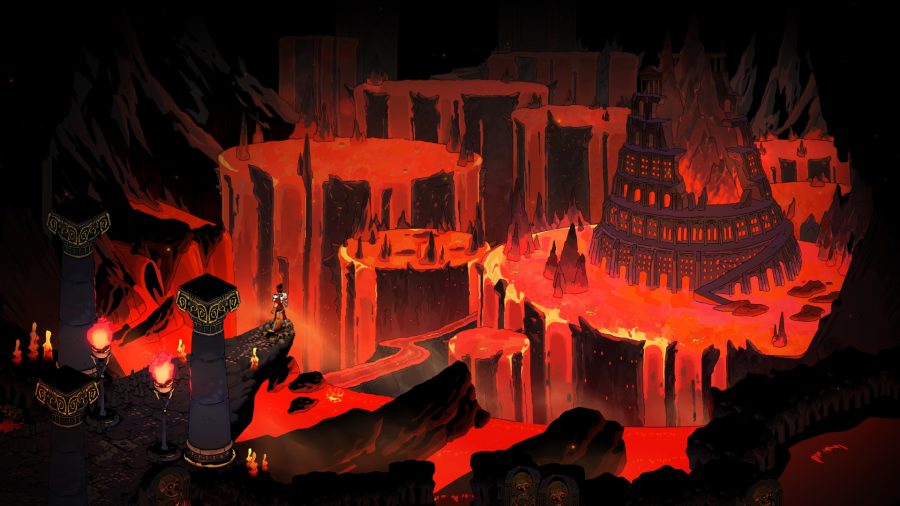 Subtle demonic techniques aside, however, the hell featured in BPM is ultimately supposed to be an enjoyable one. “It’s the really fun version of hell, whereas a more physical version of it wouldn’t be fun at all. It’s like Dante’s Inferno mixed with Marvel,” says Houghton.

We’re in Greek hell, you know? It’s not like the eternal damnation you’d find with Christian hell

The lighter side of hell can also be found, to some extent, in last year’s Hades. An indie roguelike, Hades is about protagonist Zagreus’s stuggle to escape the fiery underworld ruled by his father (also Hades). Composer Darren Korb isn’t shy about his willingness to rock out a bit more than he had in previous soundtracks for developer SuperGiant Games – indeed, given the setting, he could do no less. “Because it was in the underworld, I felt an obligation to include metal. That is the music of hell. I couldn’t not do that because, not only would I have been disappointed if I didn’t do it, but I just feel like there’s at least this unspoken expectation that music in hell will have a little bit of metal in it.”

And yet Hades can’t simply ape the music of BPM and Doom Eternal – after all, just because it’s set in hell doesn’t mean it’s set in the same hell. “We’re in Greek hell, you know? It’s a little different,” Korb elaborates. “It’s not like the eternal damnation you’d necessarily find with Christian hell.” So Korb set out to cool the electric guitars and kick drums of traditional hellish metal with Mediterranean influences to suit the game’s ancient Greek setting. Turkish instruments like the lafta and baglama are used to create what Korb calls Hades’ “Mediterranean prog-rock Halloween” soundtrack, with each aspect adding a different layer to the Greek underworld. 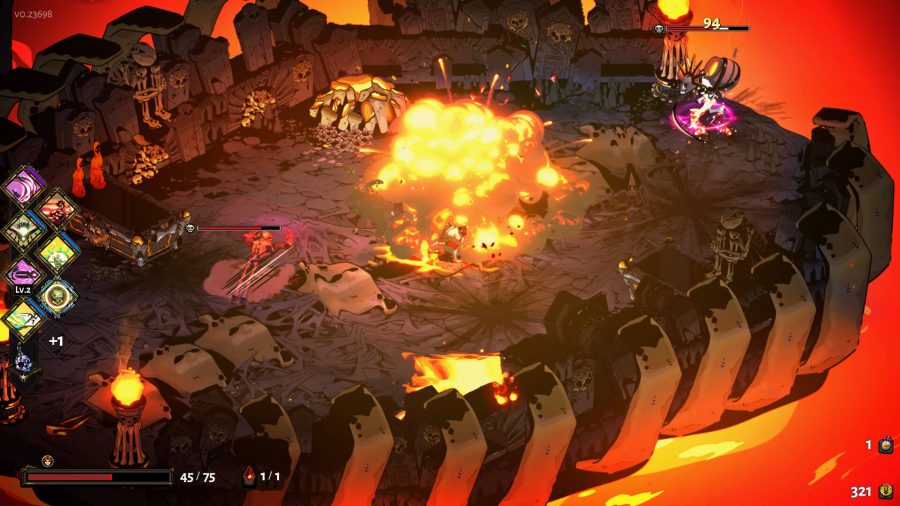 “The Mediterranean aspect represents the setting,” he says. “The prog rock brings the hell, and then Halloween represents what isn’t in those other two things: the lightness of the game. I wanted to have something that was high-energy, rocking, and intense, rooted in this Mediterranean sound but also not too serious. The music’s got a little bit of a wink,” Korb reflects.

Gamers may be doomed to return to hell time and time again, but as these three games alone have proven, there are various ways to keep it interesting through music. While they all demonstrate just how essential heavy metal’s thrashing guitars and rampant drums have become to the realm of eternal damnation, they also prove that they are nothing more than a place to start.