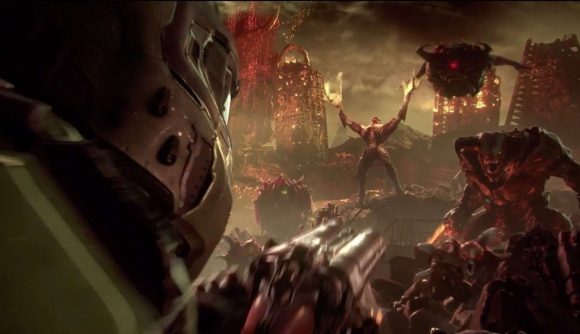 Like just about the rest of this year’s videogames conventions, QuakeCon will be held remotely this year. It’s the first time in 25 years that there won’t be an in-person QuakeCon, but id Software and Bethesda are planning on getting as many people involved nonetheless.

Running August 7-9, this year’s QuakeCon is going to be a streaming event that you’ll be able to watch primarily on Twitch. The ‘QuakeCon at Home’ Twitch Team, as Bethesda is calling it, will be streaming a welcome event August 7 starting at 11:00 CDT (that’s 17:00 BST / 12:00 EDT / 9:00 PDT), and then streaming around the clock for the rest of the weekend with influencers, global Bethesda community teams, and some “surprises,” according to Bethesda’s announcement.

Bethesda says it’s planning on featuring players on the QuakeCon at Home Twitch Team, and will be posting details on how to register in the near future.

The event will culminate with the conclusion of the Quake World Championship August 9 at 16:00 CDT. That event will pit the world’s top 24 Quake players against each other, each competing for a slice of a $150,000 USD prize pool. You’ll be able to tune in for that through the QuakeCon Global Super Stream, and Bethesda says it will have further details on that at a later date.

Through the QuakeCon Twitch stream, you’ll be able to donate to a variety of charity organisations. These include Direct Relief, UNICEF, the NAACP Legal Defense Fund, and The Trevor Project. Additionally, id and Bethesda will be selling new ‘Catodemon’ and ‘Dogvahkiin’ T-shirts, and 100% of the proceeds from those sales will go to help Dallas Pets Alive and FOUR PAWS, two animal welfare organisations.

QuakeCon usually isn’t the venue where Bethesda or id make big announcements – but it’s often been the case that attendees have gotten a first-ever look at gameplay of upcoming titles. Bethesda hasn’t made any official announcement about a reveal this year, but it’s possible the companies could give us a peek at more of the upcoming campaign DLC for Doom Eternal.