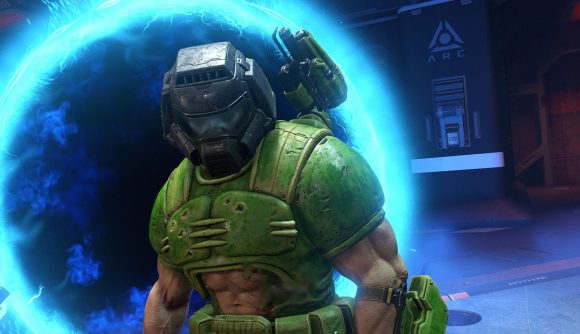 Doom Eternal has proven to be pretty challenging, as single-player FPS games go, and its difficulty options let you push yourself to an absurd degree. The game’s top-end, Nightmare difficulty is as harrowing as the name implies, and Ultra Nightmare adds permadeath to the mix, where it’s all over after a single death. Now, imagine pushing yourself through an extremely tough, ‘death is permanent’ version of Doom Eternal – and dying to the final boss.

That’s exactly what happened to streamer Moonmoon. (Naturally, some spoilers for Doom Eternal’s final encounter will follow.) After a full run of the game, Moonmoon got to the final battle with the Icon of Sin. In the final seconds of the run, he’s dealing with minor enemies and runs low on health.

Moonmoon’s just about to get out of the deadly situation after picking up a charge for the insta-killing energy sword – but he goes down to a single strike from an enemy just before his own sword swing comes out.

If you can stand the secondhand disappointment, you can see Moonmoon’s response to the death below. (He’s moving on to Mount & Blade II: Bannerlord for now.)

Back during the promotion of Doom 2016, id mentioned that nobody at the studio had managed to beat that game on Ultra Nightmare in run-up to release. Clearly, the challenge has not eased up in the intervening years.