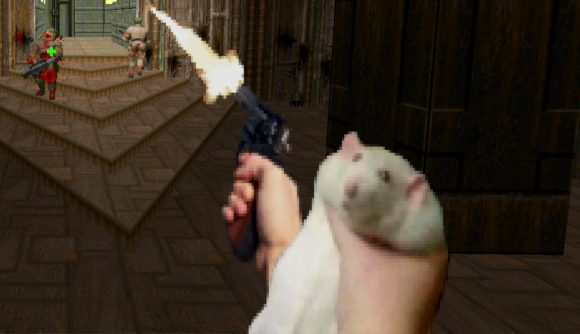 The problem with Doom II is that there aren’t nearly enough rats in it. Fortunately, a bored modder has fixed this problem by creating Rat Doom, a mod that swaps out all of Doom II’s weapons for “something rat related.”

“Why would you do that,” a silly, naive person might cry – to which we would firmly respond, “why wouldn’t you do that?” It turns out the reason you do something like this is because people would not stop posting rat memes on the Discord servers you like hanging out on, as the mod’s author explains. “So this abomination was made,” they write in the description. “I hope you enjoy this low effort mod.”

Low effort though it may be, you have to admit that Rat Doom does add rats to Doom, which is good. Specifically, each weapon now incorporates rats in some way. This isn’t like the Rat King from Destiny 2, which is a sidearm that has rats carved on it. No, in Rat Doom your weapons become actual rats. Mostly, one particular rat, which is chubby and cute and fuzzy and looks a bit bemused by whatever’s going on.

Disturbingly, some of the modded weapons appear to involve harming the rat. We assume that no rats were harmed in the creation of the mod.

If rats aren’t your thing, check out Shrine, which is a Lovecraft-inspired total conversion mod for Doom II. Or if you’re more into the modern versions, there’s already a mod that adds ray traced lighting effects to Doom Eternal.