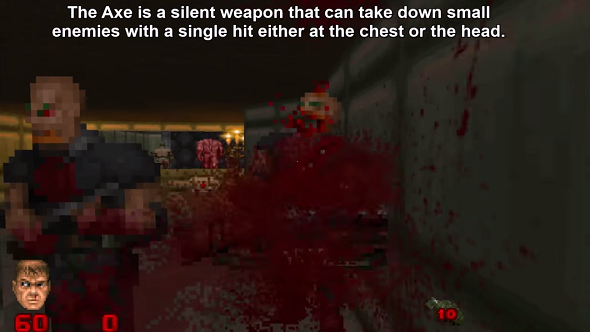 Brutal Doom is the mod that keeps on giving, cranking up the classic FPS to ridiculous levels, adding new guns, features and, obviously, lashings of extra gore. Some people like to pick and choose how their favourite FPS evolves, though, and many don’t like how you have to aim up and down, because it changes the feel of the original too much. Well now there’s an option to turn on auto-aim so you only have to aim left and right.

Previously there was a bug that meant auto-aim couldn’t be implemented. Trying to shoot distant enemies often defaulted to aiming at a corpse on the floor. Luckily, the developer has plugged that, so purists can toggle it on in the options menu and blast away.

There’s a new melee weapon, too. The axe can be acquired by taking it from a zombie civilian once you’ve gibbed them. This powerful tool will take down medium-sized enemies in a single swing, assuming you hit the head or the chest. Swords and maces are coming later for medieval-themed levels.

Have a look at all that, as well as a sneak-preview of some new art assets, in the developer diary above.