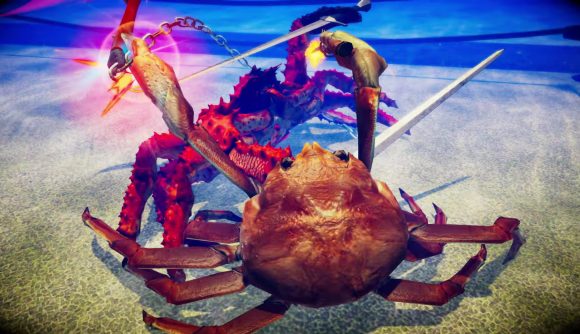 Evolutionary biologists have observed that nature seems to have a strong preference for crabs – it’s evolved crab shapes several different times over the course of natural history. Given how many crabs there are in the world, it’s only natural that someone is going to figure out how to run Doom on them.

Bizarre as that sounds, it’s theoretically possible to organise enough crabs to power the classic FPS game. Wharton professor Ethan Mollick tweeted about a 2011 paper published in the journal Complex Systems 20 that described using swarms of soldier crabs, moving around in plastic maze structures, to implement logic gates. Mollick reasons that since there are eight logic gates in a byte, and that it takes about 80 soldier crabs to run a gate, you’d need about 640,000 crabs to store a tweet.

As exciting as the prospect of tweeting on the crabchain sounds, Twitter user NORMAL HOROSCOPES extrapolated the finding further, announcing “YOU CAN RUN DOOM ON 16,039,018,500 CRABS”. So, since there are about five and a half dozen crabs in a bushel, you’ll need to order 243,015,432 bushels of crabs (be sure to specify soldier crabs) if you want to run E1M1 on them.

The math checks out.*

Sixteen billion is a lot of crabs, but since nature never seems to get tired of making them, we can’t imagine that rustling up that many should be much of an issue. You could run into management problems, however, so we’d recommend limbering up with a couple rounds of Fight Crab beforehand.

Anyway, now we know how many crabs it takes to run Doom. It’s been a productive day all around.

*Trust us on this.