Looking back at Doom now, it’s hard to believe it terrified so many of us to the extent it did. It’s an undeniable classic, but technology has moved on so much since that it’s, expectedly, now lost its horror edge. These creature design models shared by a Doom series artist, on the other hand, are still bloody terrifying!

Doom made our list of best first-person shooters on PC. Obviously.

Doom nostalgia is the best nostalgia. And possibly the most unnerving. Just last week, the game’s mastermind John Romero dipped his toe back into its sci-fi shooting cesspool after a 21 year hiatus, and now artist Greg Punchatz has shared a load of his modelling work from the classic FPS series.

Punchatz – whose repertoire extends beyond Videogameland, having worked on From Beyond, A Nightmare on Elm Street 2: Freddy’s Revenge and RoboCop, among others – took to Facebook to share some very cool Doom sculpture work, as well other movie and pop culture memorabilia.

Speaking of nostalgia, Punchatz’s father, a Mr Don Ivan Punchatz, also designed the original and now infamous Doom cover art. Fans of the franchise may claim to have Doom in their blood, but this could literally be the case for the Punchatzs. Which is an interesting (and perhaps worrying?) family trait for sure.

Here’s a snippet from the shop floor (the album in its entirety can be found on Punchatz’s Facebook page): 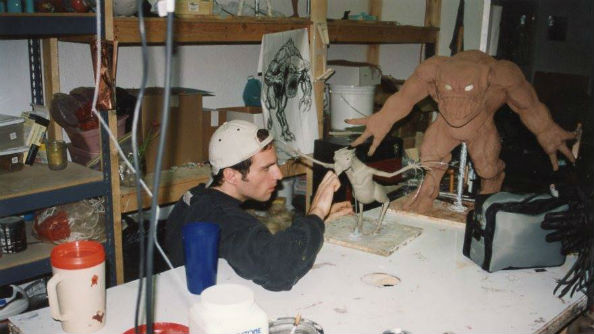