Doom is just around the corner, though a little further than we thought. A new trailer has revealed the release date is May 13th (a Friday naturally) along with some glimpses at how the final version of the game is looking and even more death, destruction and bloodiness. Bethesda have also revealed the game’s collector’s edition, and what you get for pre-ordering. There’s a worrying mention of what sound like micro-transactions in there, but it’s probably not quite time for panic yet.

If Doom isn’t good enough for our best FPS games list, I may cry.

First, have a look at the minute long campaign trailer, which has everything from what looks like some kind of super-minigun to the now obligatory end-of-Doom-trailer murder at the hands of a demonic creature. Fairly sure it’s nu-Doom’s version of the old Barons of Hell.

Very nice, and I appreciate Bethesda’s thoughtfulness to put the release so close to my birthday. They’re so kind. Worth noting that there’s clearly been a colour-pass on various textures and lighting, this is a much brighter Doom than the footage we saw at E3, and better for it. Whether id listened to the moderate complaints along those lines or if it had always been the plan I don’t know, but it’s good either way.

On to those pre-orders. Here’s the full quote before we grab the pitchforks:

“Those who pre-orderDOOM will receive the Demon Multiplayer Pack, which includes exclusive multiplayer goodies like a demon armor set with three skin variations, six metallic paint colors and three id logo patterns for your weapons and armor, and a set of six Hack Modules – consumable items that will give you an edge in a multiplayer match.”

Cosmetics: cool. They’re just a standard now and if they mean people play a bit longer, developers get a bit more money and we get more and more great art, I’m all for it. It’d be nice to get them for free, but it’d be nice if a lot of things were free.

Those consumables though – sounds a bit dodgy doesn’t it? Thankfully, GameInformer’s preview from last month sheds a little light on the situation, and it sounds like they could be a good thing. They liken these hack modules to burn cards from Titanfall – bonuses you can activate after death that give you a reason to be happy you’re respawning. Titanfall’s were always powerful but never ruined the flow of the game and, most importantly, were distributed lavishly so not only was there no way to pay for them, but no reason you would ever want to – you were drowning in the things.

So long as id as balanced them right, they should just add an extra bit of spice to Doom’s revival of its legendary arena multiplayer. It isn’t perfect that they’re being given away with pre-orders, and if they are something you can buy normally that becomes a problem, but right now it’s probably not worth getting all Glory Kills about it. Speaking of balance, try not to tip one of these over: 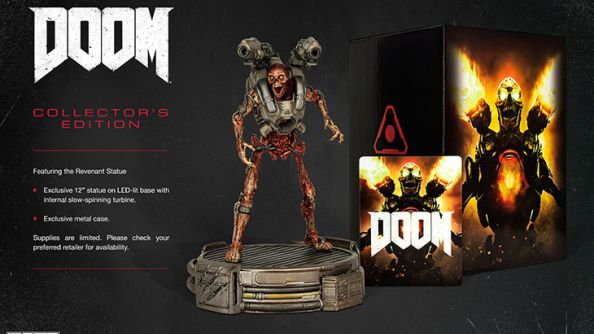