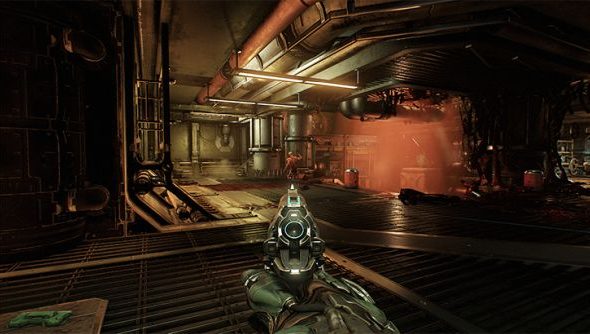 Patches do a lot of things. Rebalancing. Bug fixing. Even the odd new feature, if you’re lucky. Rarely do they bring with them two decades of nostalgia in one, relatively simple change. Doom’s first major patch, coming tomorrow June 30, allows for ‘classic’ weapon placement – that means your gun is locked to the center of the screen in a way that doesn’t look natural to anyone who has played an FPS since ‘98. There’s a whole regular patch in there too, but who cares about that?

For those powered by more than simple nostalgia and bloodlust, here’s the highlights from the patch:

The patch will auto-deploy on all platforms on June 30, according to Bethesda. They’ve also been applying matchmaking and balance fixes this month, which already went live to make multiplayer a bit healthier. For the full notes have a look on the official site.

This story lead to debate in the office – by which I mean I asked Phil – as to what the first game to switch from middle-gun to right-gun was. Unreal was the earliest we could think of, slightly before Half-Life, but assume that there must have been some barely-known progenitor as there often is. Answers on a comment-shaped postcard, please.