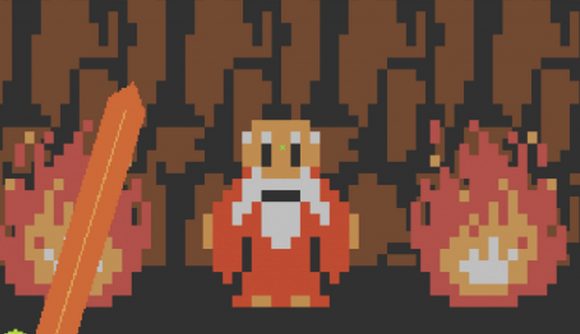 In a combination so filled with nostalgia that I feel it briefly transported me back in time, a Doom modder attempted to recreate the entirety of the original Legend of Zelda game within id’s iconic FPS.

The Legend of Zelda: Total Conversion aimed to convert the 1986 Nintendo classic from its top-down perspective into first-person. Modder Exkodius says that the idea began “while me and my friend were playing Zelda on the good ol’ NES,” and had the idea to switch the game to first person to allow players to explore the world “in all its 8-bit glory.”

After a couple of days of research, the project started in earnest. Despite the two games having very little in common, the conversion is surprisingly effective. The iconic “it’s dangerous to go alone” scene looks great, and while Link might be not be dealing with literal hell-spawn, I’m impressed at how well the game’s enemies have been brought to life with this new perspective. Sadly, not all that much progress was ever made, but Exkodius recently released the project files to allow other modders to move forward with it.

In a post on the mod’s ModDB page, Exkodius said that having spent three years on the project, they realised they were unlikely to ever finish it. Having received multiple requests to release the files, they’ve published them on the aforementioned page.

You’ll need an original Doom file to run the conversion, although the mod was initially developed in the GZDoom source port. The shooter’s modding scene is in pretty rude health at the moment, with Overwatch’s D.Va, Star Trek, and even a round of golf all making the trip to hell in the past few weeks alone.