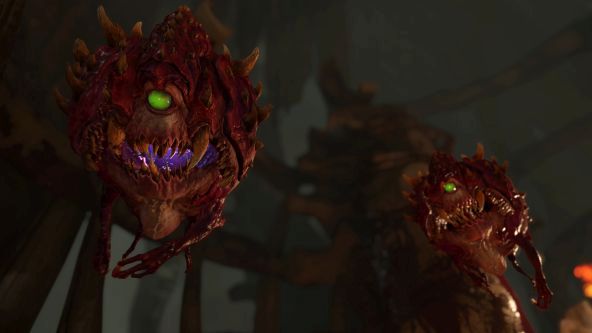 Gosh, there’s a new Doom game on the way and we’re filled with endless questions. What’s the Doom release date? Will Doom run on my machine? Did that time machine I built actually return me to the early 90s or am I living in some weird psychoactive fever dream? We’ve done our best to gather all the answers and more below, and will update as regularly we can. You’ll also find all the Doom trailers, any extra info from id that’s been revealed and what exactly a Mancubus’ burps sound like.

Update 12 May, 2016: We’re about to be Doomed. With mancubi bearing down on us, we’ve hurriedly pulled together all the most helpful information with which to educate ourselves on the coming threat. We’ve now got footage of the campaign played by the experts, and talk of the chess-like relationship Doomguy has with his enemies. “SUCK IT DOWN!!”, as John Romero would scream.

Doom will release on Friday, May 13th, 2016. You can grab it on Steam or through Bethesda’s list of retailers. It comes in two forms, the standard and collector’s editions. Both get access to the following for popping a pre-order:

Meanwhile if you go for the collector’s ed, you get this fresh young thing: 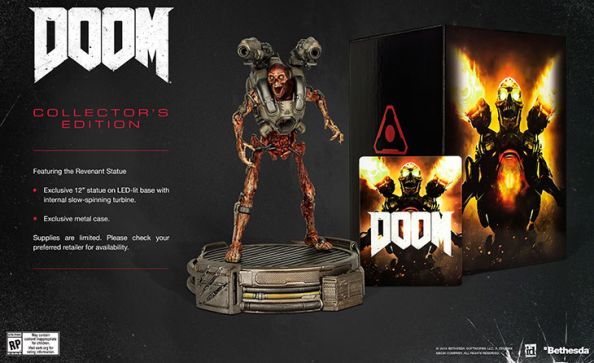 Doom will be released entirely uncut in Germany, for the first time in series history. Bethesda successfully appealed a federal ban for Dooms I and II only five years ago.

Here’s when the servers launch and the game unlocks:

Here’s when you’ll be able to pre-load:

The full system requirements have finally been revealed and the recommended ones are rather meaty indeed. Must be all the gibs.

The system requirements have been uploaded toBethesda.net.

Access to the Doom multiplayer beta, running March 31st to April 3rd, was guaranteed to everyone who pre-purchased the surprisingly excellent Wolfenstein: The New Order last year.

If you’re not one of the chosen few, here’s the trailer that went out for the closed alpha to give you a taste:

Doom’s single-player is fast and bloody, seeing you descend into the classic UAC base to stop some sort of apocalypse. It’s best shown off in Nvidia’s PC footage – played by a skilled and concentrating player, it’s a breathtaking guitar (gib-tar?) solo of quick-switching and vertical movement. Hypnotic stuff:

The first proper glimpse we got of single-player was in Bethesda’s “campaign trailer”, which showed us that bosses are going to keep ripping your limbs off:

There were also glimpses of the campaign’s opening visible during Conan O’Brian’s Clueless Gamer muck-about:

Datamining in February appeared to confirm the return of the spider mastermind and, not unrelatedly, a random boss system.

We’ve heard a little about how Doom progression will work, letting you upgrade yourself as you progress, giving you more ammo, stronger melee attacks and other upgrades. Also at that link our only glimpse of the plot: a religious zealot scientist named Dr. Olivia Pierce is the baddie, having unleashed all these demon fellows.

Bad news first: it doesn’t look like Doom will be supporting mods outside of SnapMap. That’s their all-inclusive tool for creating levels and modifying other elements. Sadly, it’s not for giant outdoor environments, despite promises that it would be as useful as the original’s mapping tools that are still creating amazing works to this day. Squaring up to a twenty year old game may seem like an easy task, but it has massive shoes to fill in this area. We’re not sure SnapMap will be enough.

Good news: it is still a very powerful tool and, apparently, as easy to pick up and mess about with as Minecraft. Doom WADs are some of the most imaginative and well balanced gaming experiences I’ve ever had and making their spiritual successor easier to create, share and play is important. SnapMap is an integrated part of the game client and will have its own front-page for browsing the best user created gubbins. Obviously, it’s not the same as an actual devkit, but it’s aiming to be as close as possible while maintaining some form of new user friendliness.

While Snapmap will let people define their own Doom multiplayer as they like, the base version will support arena-style shooty-bangs. It’s faster than your average, and more lethal thanks to glory kills and Doom’s massive arsenal. There’s a bunch of modes promised, from regular Deathmatch to Domination and Freeze Tag:

id have also flaunted the decoys used to distract enemies while you tip-toe around them, delivering a shotgun blast to the nape of the neck:

And here’s a rather rushed tour of the nine launch maps:

Doom also has a power up that turns you into a flying, rocket-spewing Revenant – having checked the video games dictionary, it turns out that’s actually the definition for ‘cool as hell.’ That leaves us with the implication that all of Doom’s eclectic cast of demons and dead guys could at least be jerry-rigged to be playable. That’s something I’ve been wanting to do since about 1998. Playable cyberdemon vs. spider mastermind map, anyone?

There’s also this talk of Doom Hack Moduleswhich was a little worrying as they’re coming as part of pre-orders. Current best estimate likens them to Titanfall’s Burn Cards – once per life consumables that give you an edge but hardly make you invulnerable. Assuming they never become a micro-transaction, they should be an entertaining addition.

Glory kills pop out (of the eye socket) as one of Doom’s bigger additions. They’re cinematic finishing moves that can be used on almost any enemy when they get to low health. They also seem to trigger on specific events, like landing onto an enemy from a great height. Exceptionally gory to the point of inducing genuine queasiness, they’re playing double duty in guaranteeing that 18 rating and making the game very appealing to everyone under that age. Still, should be good for getting the frustration out.

Speed is the other ‘pillar’ that id are pushing. Enemies die quickly, rockets move fast, the player is always sprinting – across every way to play, the point is that you’ll never stop running around, dodging and firing. It’s the part of the game that most fits what has become the original’s legacy, but it’s debatable they’ve managed to echo it successfully. The number of enemies on screen, the power of the guns to slay them in their dozens with a single blast, the flow of movement – none of it is quite hitting that sweet spot in the footage that’s been shown.

Doom isn’t actually the first version of the fourth iteration of the series that has been in development. A version that focused on a hell-infested Earth was abandoned some time in 2011 with little fanfare. Little more was known about it until earlier this year, when a studio reel from someone at Blur Studios, who are outsourced cinematics for various companies, showed off some of the unused footage for that game.

The folks at id talked a little about killing it, saying it had no soul or personality and didn’t feel like Doom. Fans agreed when the above footage came out, comparing it to all the usual triple-A hyper-popular punching bags. Given it’s a selection of completely out-of-game footage with no shooting, demons or sprinting, I’m not sure if those comments are coming from exactly the most informed position, but I definitely prefer what we have now.

Bethesda have been uploading the clips I’ve scattered above rather than the individual trailers they showed during the E3 presentation. Here’s the exception, which shows off everything the game has to offer in a quick spurt:

The full presentation has everything, and lengthier Doom gameplay segments.

This developer diary concerns what id call a sort of FPS speed chess, in which every enemy type represents a piece and one of your guns its counter.

And the launch trailer sets the scene for speedy slaughter.