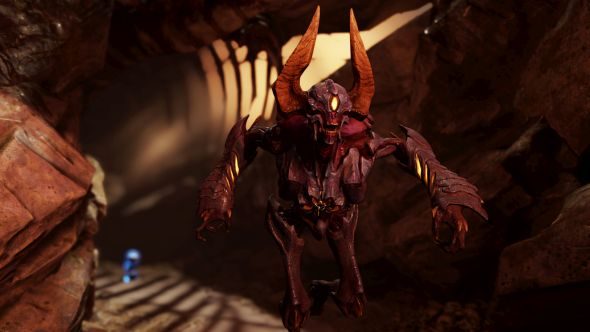 Doom’s single-player is one of the best things to come out this year. This took basically everyone by surprise, including id themselves, it seems, since they’ve spent so much time upgrading the fine-but-only-fine multiplayer modes rather than slapping more levels onto their masterpiece. There’s still no announced plans for a proper campaign expansion, but Marty Stratton has confirmed a coming score attack mode in an interview with Gamespot.

It really is one of the best games of 2016, we’ve made it official.

Stratton says that it’s designed as “a way to continue to play the campaign in more of a time or score-attack type of mode” and that it will be “coming up relatively soon.”

“It’s a very arcade-y feeling game as it is,” he continues, “and when you start to reinforce that through visual feedback and different mechanics in the game, it really becomes a totally different way to play. You get to apply all of the skill that you learned playing through the campaign in this new way of playing.”

Sounds like a good idea to me, hopefully it rewards constant weapon-switching and clever play rather than the more exploitative builds you could go for towards Doom’s endgame. Stratton also mentioned there were other “campaign things in the works” but didn’t go into further details.

The full interview also dives into upcoming changes and additions to SnapMap and multiplayer.