In the run up to the PCGamesN Awards on December 23rd – mark your diaries, people – we’ll be publishing daily staff picks of the finest games 2016 has had to offer. Up first is Phil with his ode to the old-school shooter…

Obviously Doom. It could have been half as good and still walked it, honestly.

As it happens though, id released the best first-person shooter of its type for years. And I say ‘of its type’, quietly hedging my bets while I distract you with some front-loaded hyberbole, because first-person shooters aren’t really a thing in 2016. Competitive multiplayer FPS games, sure; first-person stealth games and RPG shooters. Even modern MOBAs get within your skull and present a pair of hands holding a weapon these days. But the first-person shooter, as defined by previous decades? People might still be playing them en masse, but developers aren’t making them. They’re not a thing.

Looking for more PC gaming recommendations from 2016? Try our picks of the year’s best titles.

Before Halo and Bioshock pulled the genre this way and that, FPS gaming was about running everywhere at a full sprint, committing gruesome acts in an adrenaline-fuelled frenzy and leaving LMB alone only when the game had something really big and impressive to show you in order to further its story. It gave you puzzles, yes, but quite often the solution to those puzzles involved shooting something or tossing a grenade somewhere dangerous. The FPS was a single-minded thing before the genre cross-pollination of the 2010s, and this year id reminded us how much fun that single-minded thing was. I feel weird using the word ‘purity’ in the year 2016, but Doom is such a thoroughbred of the old school that many of its features, once the pillars of the FPS, now feel all quaint and legacy. 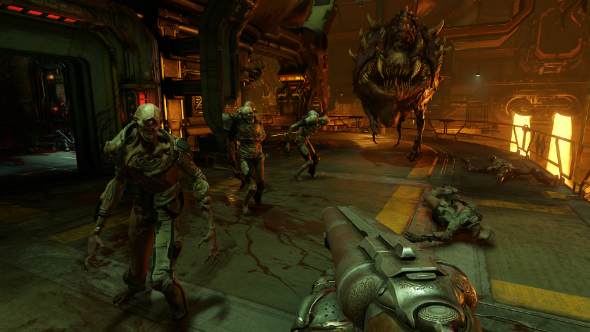 Health packs. Ammo pickups. Greased-up movement speed. Fundamental design choices that have a tremendous effect when you see them implemented in a shooter once again, because they’re basically still great ways to keep the player excited and at risk. They remind us that in the process of increasing realism, we might have lost something important along the way. Turns out it’s not such a heavy burden on immersion to carry nine weapons around at once. You’re not really thinking about the logistics of that when two Hell Barons are charging at you.

Also: they’re Hell Barons. You’re in actual Hell. What, we can accept nightmare-pink steroidal cryptids and geographical manifestations of religious concepts, but not the idea of jumping a bit higher, moving a bit faster, or running over a glowing orb that might make your weapons better? After a few missions in the company of Doom, all the concessions to ‘immersion’ and ‘realism’ shooters have increasingly taken as rote in the last decade reveal themselves as concessions to limited console controller layouts.

Screw the home brand Hans Zimmer soundtracks in those two-gun, head-bobbing, staring-at-your-own-hands-in-a-moment-of-cinematic-first-person-realisation modern shooters, too. Doom tunes its guitars to drop-Z and shoves a bunch of djent down your unwilling throat so forcefully that you barely notice how elegantly it shifts in dynamic according to the intensity of combat. You might not listen to detuned distorted guitars and triggered double-kick drums in your own time, because you’re no longer 14 and your band Fuck The System never really got off the ground, but you have to admire how well it’s deployed in the fleshy corridors of The Necropolis.

Doom’s story is more prevalent in 2016 than it was in 1993, and all the worse for trying to find a grain of plausibility in a Mars research facility opening up a hellmouth, but there’s something endearing about its combination of earnest voice acting and moments of quasi-slapstick from Doomguy. It’s a bit like hoisting yourself up onto John Carmack’s lap to have him tell you a bedtime story, comprised mostly of him doing gun sound effects (yes, I know Carmack’s at Oculus, don’t ruin this for me). 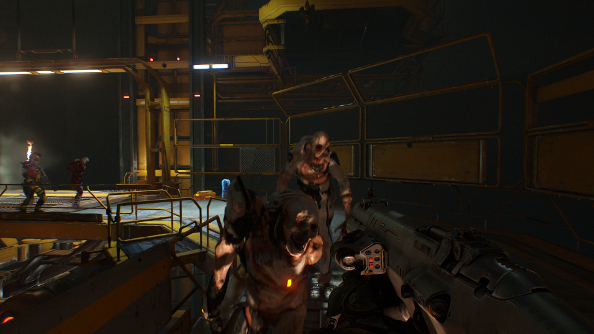 Probably the reason I like Doom so much, other than my longstanding fetishism for ‘90s shooters and the occult, is that it’s instant gratification. You can click on it from your Steam library and, SSD permitting, be shooting something within the minute. You may then continue shooting things for significant durations without once having to alt-tab and check on the meta or watch a YouTuber honk at you about build guides and upgrade paths. Like a virtuoso singer recording an acapella, it dares to strip away everything but the shooting so that you can appreciate its qualities all the more.

And maybe this is an older gamer thing, but I appreciate that instant gratification, like, a lot. In their quest for increasing complexity and immersion, so many new PC games tend to overlook that the player’s time is a limited commodity to be respected, not feasted on down to the sun-bleached bones like an animal carcass in the savannah. So while you could very well tell me that Dishonored 2 is a better game than Doom, and that Hitman is too, and that I’m a moron, and make some very strong arguments for all those cases, I won’t hear of it. Because as much as I enjoyed those games, I don’t really yearn for more exactly like them and the associated time commitments they drag along in tow. But another Doom? Another eight hours of pure fun? I’d suit up for that.