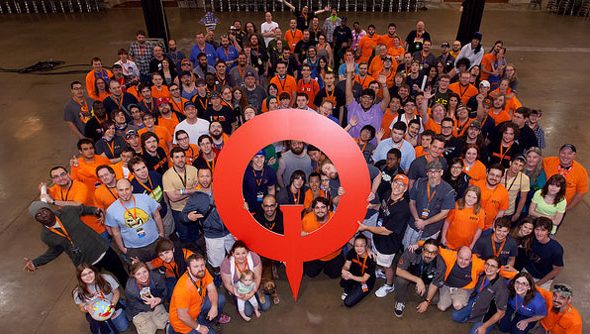 There are two network parties at the Hilton Anatole this weekend. The first is for KPMG, the giant accountancy firm. They are suited and booted, ready to talk. You can spot them a mile off, smart little white badges, free (expensive) coffee and a rare confidence. This is their summer event, and they are here to work.

On the other side of the lobby is the early arrivals for the other party. It’s a Quake team. They only get together at QuakeCon. But they play together every night. They hug, smile, laugh and joke. They trail PCs and monitors and network cables in little carts. They are so happy to be here.

The KPMG lot spot the gamers. You can see them trying to mask their curiosity. Unfailing politeness, but with eyebrows raised. 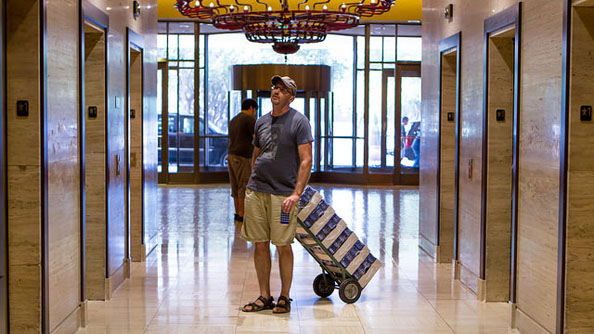 QuakeCon is weird. It’s a LAN party really, to which Id, and their owners Bethesda have gradually bolted on promotional events, lectures and panels. For a relatively small fee, you can bring a PC and play on their LAN all weekend. For free, you can turn up and watch FPS tournaments, see the panels, or just wander among a few high-end PC resellers.

It’s weird because it’s such an institution, in such an incongruous setting. It’s called the Hilton Anatole, on the outskirts of Dallas its home since 2006 and nothing about that makes sense. The Hilton is vast, and corporate and clad almost entirely in marble. The lobby, the in-room brochure is keen to point out, “hosts the largest collection of Asian Art of any American hotel.”

And downstairs, in the darkened belly of the conference rooms, 9000 gamers will queue up to kill demons. 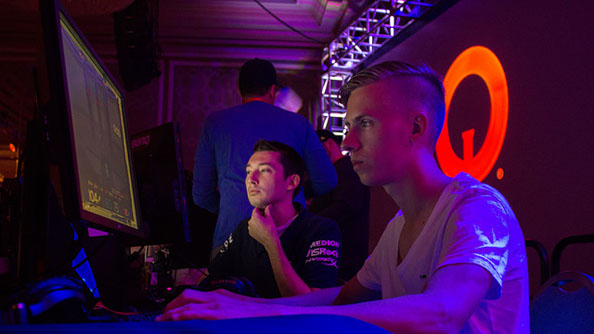 The night before the show opens, I wake up at 3am. Jetlag’s a bitch. I can hear voices. Quiet at first, then uproarious cheering, before someone hushes the noise.

Someone’s having a party.

I creep outside to see what’s going on. There’s a trail of CAT5 cable running between rooms. They couldn’t wait to get a LAN going. It’s too funny, almost too sweet to get upset about. I go back to sleep.

Later, I realise one of the KPMG lot called hotel security. Security just asked them to keep the noise down.

What makes QuakeCon different is the sense of community. This is an event that has a reputation: part built on id’s support, part built on a (now sadly absent) keynote by id founder Jon Carmack, but mostly built on friendliness. It’s impossible to overstate just how welcoming QuakeCon is. It’s staffed mostly by volunteers, and these volunteers are QuakeCon attendees. One guards one of the emergency exits – making sure that the PCs and laptops in the hall are safe.

So taken is he with this role that he’s dressed as Kick Ass for the occasion. He’s pretty proud of his cosplay – he’s walking up and down the huge rolling doors, tapping his sticks together, posing for photos. It transpires that he was so excited about his costume that he entirely forgot to bring his PC.

“I’ve got to go back home tomorrow to pick it up.” 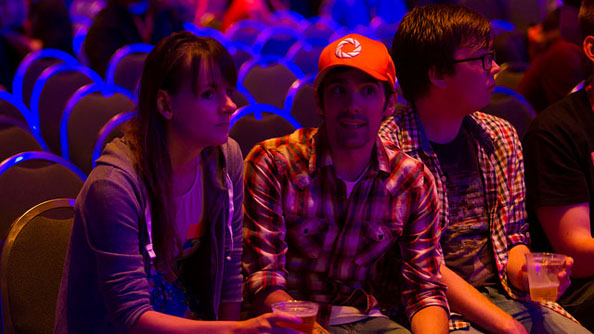 There’s another thing happening this year at QuakeCon. Part show of strength, part morale booster: id are going to show off their work on Doom. Not Doom 4, not Doom Redux. Doom. They’re rebooting the company’s most important game.

I’ve been a games journalist for over 10 years, and there is no greater thrill than being with a games fans during an important announcement. My favourite, absolute favourite memory is sitting in the audience as Blizzard announced The Burning Crusade. The noise was like nothing else. Nothing except ten minutes afterwards, when Blizzard announced that they would link WoW’s auction houses.

Gamers understand what’s important. A demon invasion is exciting. Buying stacks of cloth from Stormwind is a revelation.

There’s more hanging on this Doom announcement than normal. Id have been relatively silent since Rage, their last game. But in the meantime, Id co-founder and the company’s most public face, John Carmack, has left to join VR startup Oculus. Now, Id, their parent Bethesda, and Oculus have begun legal proceedings.

The only sign of Carmack is his face stretched across a row of 32” monitors near the entrance to the LAN. A quiet memorial. But with compression artefacts. 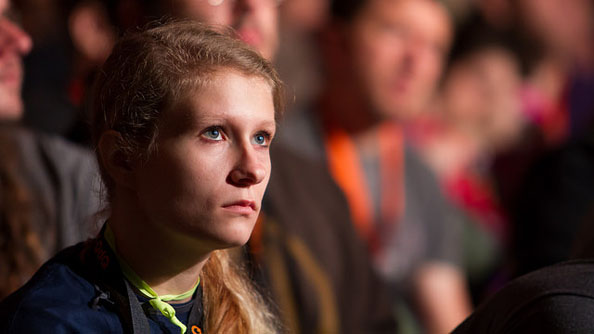 Within two seconds of the event’s welcome ceremony beginning, it’s clear that the Doom reveal’s going to work. Bethesda’s Pete Hines gets a warm, if impatient welcome. But this is a PC crowd, and any mention of console ports of Wolfenstein, or the Evil Within, their next game, get warmly booed.

This crowd is refreshed. It is eager. It is out for blood.

It’s Doom, but again. It’s the movement that strikes me as interesting: Doom’s combat has a rhythm to it. Dodge projectile, attack. Dodge, swing left, shotgun. Pause, move right, shotgun, dodge. This new Doom is that, but modern.

And the gore is just unbelievable. Limbs are sent flying, heads burst, and entire chunks of flesh disappear under a barrage of chaingun and shotgun shells. Bigger enemies face finishing moves: one grotesque blob has his stomach torn out by the player, and rammed down his throat.

You think it’s no holds barred ultraviolence, until Id reveal the chainsaw. They were holding back, just a little. Within a few seconds, they’ve sliced a man from forehead to groin.

“Shut up and take my money!” yells someone from the back. The crowd laugh. But he’s right. I’d play that right now.

The enthusiasm of QuakeCon’s attendees is infectious. There’s a shared sense of purpose, a shared sense of the absurd. There’s the BAWLS towers: the energy drink consumed by the crate, and those cans stacked higher, and higher, and higher. There’s a sense of community: more than any other LAN I’ve attended, there are kids playing, next to their parents. I see one family all joined in the same game of SMITE. I’m touched when Id’s Tim Willits specifically asks anyone who brought kids to bring them along to an outdoor screening of Monsters University with his family.

There’s the sense of ownership: players complimenting each other’s PC’s and builds, all using tech as an identity. Some players bring in four, five screens and mount them to create a collage of desktops. Others project their screens onto the walls, using little pico-projectors.

Then there’s the builds. Each year, QuakeCon hosts a “show off your rig” competition. The PCs players bring to compete are elaborate and ridiculous: the best are hives of wires and water-cooling wrapped around carefully architected scenes from games. But the very best, the most ridiculous thing I’ve seen, is a working remote controlled tank. Take it from off the desk and you can drive it around QuakeCon. Plug an HDMI lead, mouse and keyboard, and you can play on the go. It will run Crysis. It will also run over a Crysis box. Each part, the owner says, was individually designed and 3D printed.

“Does the barrel work?”

To be fair, the rules do state that weapons are not allowed in QuakeCon. 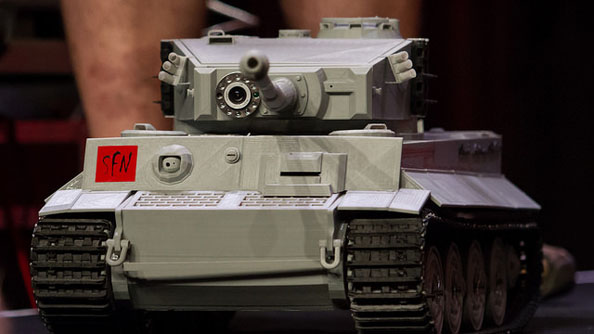 There’s a glamour to LAN parties that I miss. As you and your friends get older, gather responsibilities around you, chances to disappear into a darkened room and play videogames until you fall asleep at your table gradually vanish. It’s the extremity of it that appeals: you go to play, compete, and enjoy. After the Doom demo, after dinner, and drinks, and socialising, I disappear into the halls, just to explore.

At the back of the hall, Alienware have a display with twenty odd PCs, all ready for people to try. They’ve left them running.

I used to be pretty good at Quake. Not shit hot. I could hold my own.

One of those PCs is still running.

I dive on. Quit out of Star Citizen, and load up Steam.

Shit. Steam Guard is on. I need the emailed code.

I can barely make out the numbers on the keyboard. It takes me twenty minutes just to get into my email. I realise that I have many, many emails from Steam. All are titled: “Your Steam account: Access from a new computer.”

It takes me another ten minutes to put in the Steam Guard code into Steam.

It’s all too much. I fall asleep in a fit of rage. 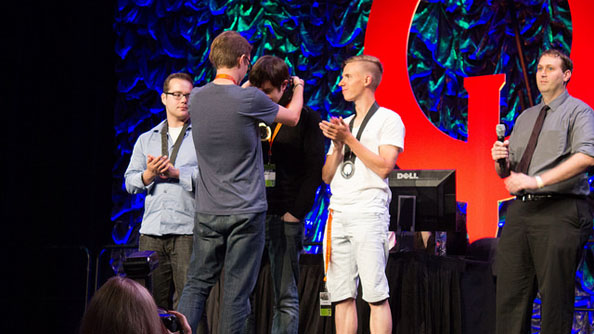 As I’m waiting for a ride to the airport, I listen in to some KPMG guys, talking about videogames. Pretending to know less than they do. As they realise they are both geeks, both PC gamers, they gradually reveal their knowledge. They ‘fess up. They, too, wish they had the time and space to get to a LAN party. Just to play. No distractions. No email, no family, no responsibilities.

That’s why QuakeCon is important. That’s why, if you’re able to, you should attend this, and other LANs. Because someday, you might not be able to. And you’ll regret you missed out.